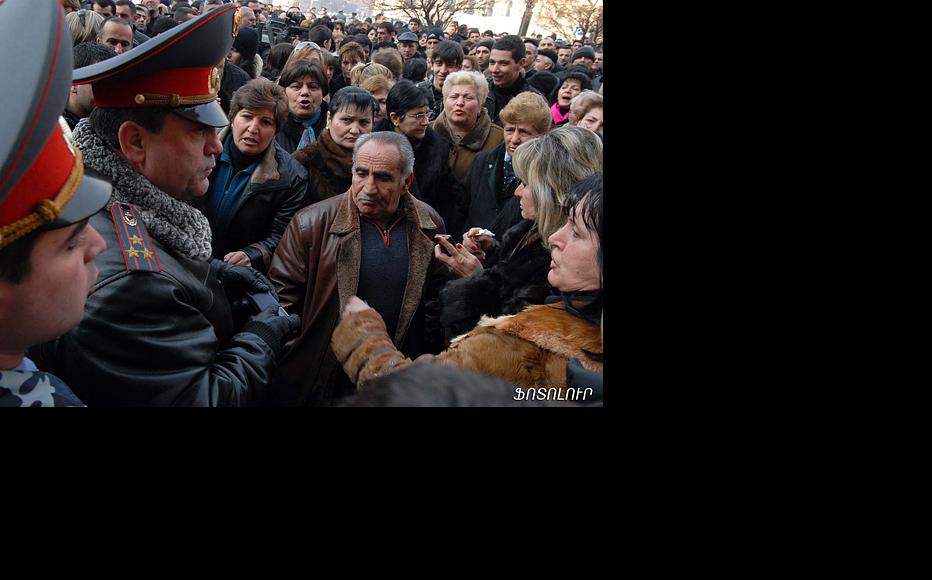 Street traders who eke out a living by selling fruit, vegetables and other items from open-air stalls in the Armenian capital Yerevan are outraged at a new city order banning their businesses.

For several weeks now, hundreds of traders have gathered outside the municipal buildings, calling for Yerevan’s mayor Karen Karapetian to reverse the ban, which took effect on January 13.

Many said the enforced closure of their business had deprived their families of their sole source of income.

“Isn’t it obvious that if I had another job, I wouldn’t be standing in the cold, selling fruits and chocolate to make ends meet?” asked Karen Hakobyan, a pensioner who has a stall in the city centre. “Of course, Karen Karapetian wants to see Yerevan free of street traders’ stalls when he looks at it out of the windows of his luxury limousine. But what am I to do? Is the mayor going to support my family?”

Hakobyan pointed at his threadbare clothes, saying the state pension was only enough to pay for public utilities over the winter.

Yerevan officials say there are about 3,500 street traders in the capital, but the traders themselves claim the number is closer to 12,000.

Hovhannes Ghalechyan of the municipal department for trade and services, said the mayor's office was simply implementing a decision made before Karapetian took office in late December.

The protests began on January 17, when about 100 people gathered outside the city administration. They marched to the presidential and government buildings on several consecutive days.

“Sadly, no solution to our problem was forthcoming,” Arman Vardanyan said, holding up a sign saying, “Don’t deprive us of our daily bread.”

“Not a single official agreed to meet with us. In reality, the authorities are just ignoring us, so we are going to starve to death,” Vardanyan said, adding that the traders has no choice but to go on protesting.

Ghalechyan remained adamant that the ban would remain in force, saying, “No action that’s prohibited by law can be justified for social reasons. Open-air vending is not only banned by law, but is also dangerous to health.”

As an alternative, he said, the city authorities were prepared to open new retail markets for the traders, and they could also rent stalls in big shops.

The protestors countered by arguing that they would not make a profit if they had to work from markets, because of the additional taxes and lease charges there.

Shoppers agree that the stalls are cheap and convenient.

“If they remove the street stalls, we won’t be able to buy fruit and vegetables at relatively cheap prices compared with the retail markets and supermarkets,” Anna Sargsyan, who lives in the centre of Yerevan, said.

Although Armenia’s economy continues to make show modest improvement – it grew by 2.6 per cent in 2010 – living standards and employment levels remain low.

The national statistical agency says the average monthly wage was 297 US dollars last year, while monthly pensions averaged 68 dollars. It put the unemployment rate at seven per cent last year, although independent analysts believe the real figure is higher.

Tsolvard Gevorgyan, chairwoman of the Union of Traders, which campaigns for the rights of small and medium-sized businesses, agreed that the street traders had been betrayed.

“They should have warned people,” she said. “Street traders need to be provided with a place they can relocate to and continue their activities.”

Karapetian is not the first mayor of Yerevan to demand the removal of street trading from the capital. However, bans in previous years focused on food sellers, and the efforts were eventually abandoned.

This time, the mayor has ordered the stands to be cleared away, including those dealing in building materials, tools, clothes and other goods as well as foodstuffs.

At a meeting of city officials on January 31, Karapetian showed no sign of changing his mind, insisting he would be “very consistent” on the ban.

Although Karapetian has not been in office long, this is not his controversial decision. Earlier this year, he came under fire for organising Russian-language classes for his staff. The classes were funded by the Russian embassy in Armenia, and opponents of the move – mainly those who want to see greater use of Armenian – said it was another step to strengthen Moscow’s influence in the former Soviet republic.

Armen Badalyan, a political analyst, said Karapetian’s decision to enforce the trading ban could exacerbate social tensions ahead of a 2012 parliamentary election.

“These street traders were supporting their families,” Badalyan said.

Armen Poghosyan is a freelance reporter in Armenia.