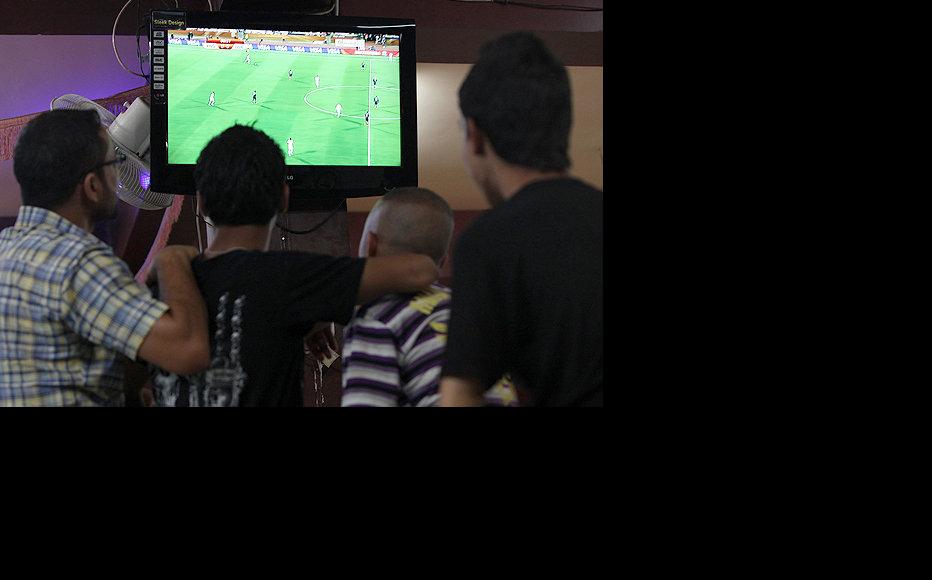 Football fans in Baghdad gather at a coffee shop to watch World Cup action. (Photo: Sirwan Aziz)
The link has been copied

Football lovers across Iraq are taking advantage of the country’s relative stability to enjoy the World Cup in public spaces for the first time since the United States-led invasion in 2003.

The absence of the Iraqi national team has done little to dampen enthusiasm for the competition which in recent days has captivated the nation, providing a distraction from the slow process of forming the country’s next government and, in some places, its grinding social problems and security concerns.

“The whole country is obsessed with the World Cup; my brothers, my father, my friends, even my mother – her mood is just like ours,” said Ali Emad, 15-year-old student as he cheered for Spain in its June 16 match against Switzerland, at a café in the Karada district of central Baghdad.

“I would bet that 90 per cent of Iraqis are interested in this World Cup. We loved football just as much in 2006, but we couldn’t gather and watch like now because security was terrible. Even if I had wanted to risk going to a café, my parents would have never let me.”

The 2006 World Cup held in Germany came during one of the worst periods of sectarian violence in Iraq. In Baghdad, restaurants and tea shops were mostly empty over fears of roaming insurgent groups and suicide bombings. A year later, as Iraqis celebrated their team’s triumph in the Asian Cup, car bombs killed 50 revellers in Baghdad’s Mansour district.

Security has greatly improved over the last four years, but sporadic attacks are still common. On June 16, at least 19 people were wounded in unrelated attacks across the country. Security forces in Baghdad are taking no chances as citizens gather in unprecedented numbers to watch this year’s World Cup.

“We have circulated notices to all the posts in Baghdad to protect the most populated places. We have a strategic security plan for this month of World Cup games and the priority will be on protecting entertainment places such as coffee shops, parks and teahouses where the games are being shown to crowds,” Mohammad Askari, spokesman for the ministry of defence, said.

The recent boom in satellite television, as well as improved access to electricity in some areas, has allowed more Iraqis to watch the games. In Erbil, the capital of Iraq’s Kurdistan region, huge screens have been erected in the popular Brusk park. Zakaria Mohammad, lead sportswriter for the Kurdish Globe, said that for the first time he has seen women watching games in the park. He estimates that 75 per cent of all conversations in Erbil concern the World Cup.

“We even talk about the World Cup when we visit our relatives or they visit us. People have forgotten about personal issues and politics to a large degree,” said Mohammad, who said he was backing Argentina.

In some areas, the rhythms of daily life are being dictated by football.

Baghdad civil servant Louay Mustafa, 39, times his lunch break so that he can go home and see the early game. He spends the late afternoon watching the next game with his colleagues at the ministry of communications. At around 8 pm, he meets more friends at a neighbourhood café to watch and bet on the third and final game of the day.

“This is the event we have waited so long for. It is the zenith of world football. It’s exciting; there is competition and betting which make the whole atmosphere fun, especially when you’re with your friends in a café in front of a big screen,” Buraq al-Sadi, 34, an electrician in the southern port city of Basra, said.

Betting on the matches is common, a range of interviewees told IWPR, but the stakes are generally low.

“It is not betting in the true sense of the word, but there are winners and losers. The loser pays for drinks, tea, juices, sandwiches, hookah and everything the table enjoyed during the whole match,” Raed Adel, 35, an Internet shop owner in Kirkuk who was dressed in the team colors of Brazil, said.

For others, the tournament is a welcome distraction to the political deadlock that has prevented the formation of a new government since national elections on March 7.

“Watching the World Cup is better than watching the same old news programmes about different political parties going back and forth again and again. It’s been three months now. Sometimes I think our people’s problems have no solution, so at least we can have the World Cup for a while,” Saad Abdullah, 35, an airline employee rooting for England, said.

The event’s popularity has also brought controversy. The leading regional cable provider has complained of local stations broadcasting the games without permission, according to local media. Some Iraqis have taken the opportunity of the World Cup to press the government on its faulty electricity grids and constant power outages, especially in poor areas of Baghdad.

Sportswriter Mohammad, an IWPR-trained journalist, said World Cup fever has been a benefit to the local economy. He cited local reports that found consumer spending well up since the beginning of the tournament. Mohammed said sales of big screen TVs, sporting goods and snacks are skyrocketing, while Erbil’s restaurants, bars and eateries are filled with customers.

“The negative side is that it seems some people have given up their jobs. For example, self-employed people like car mechanics. When you go to the shop and ask them to fix something or if you want to buy something, they tell you to come back later when the game is over,” Mohammed said.

Ammar Satti is a journalist in Baghdad. IWPR-trained journalist Ali Abu Iraq in Basra and Iraq editors Hogar Hassan and Abeer Mohammad contributed to this report.