Women Kick Up A Storm in Syrian Football

Women Kick Up A Storm in Syrian Football 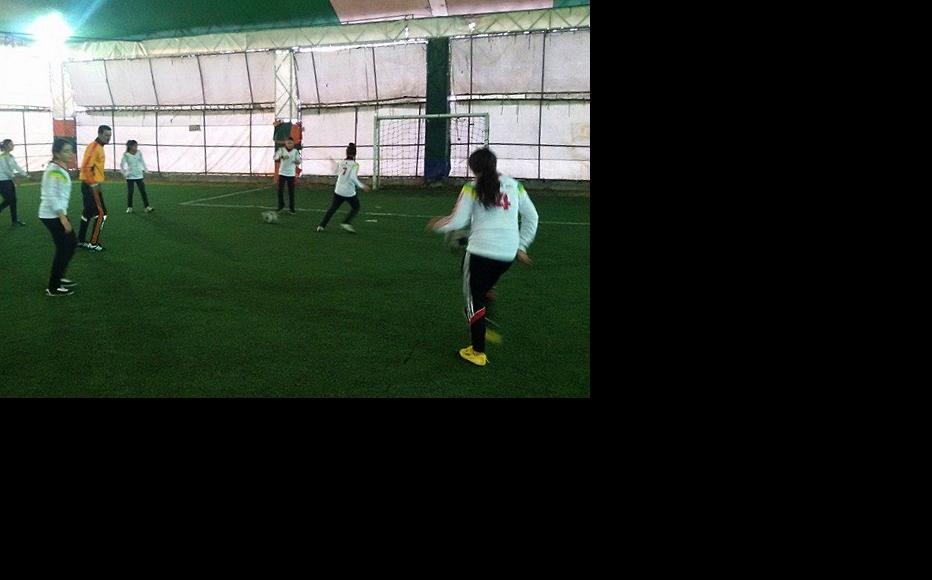 When Sulin Murad told her parents that she wanted to join a women’s football team, they were surprisingly enthusiastic.

This reaction, she told Damascus Bureau, was a result of social changes brought about by the Syrian revolution.

“I don’t know why some people think football is a sport for men only,” said Murad, now a committed team member. “We shall become pioneer players in our country.”

The sport has long been viewed as strictly for boys and men only, but three women’s teams set up by the Kurdish Democratic Youth Union are trying to change that perception.

Martyr Kelzar, Amuda and Hassakah each consists of six players, a goalkeeper, and six or more bench players. Each also has its own team colours.

Ahmad, captain of the Amuda team, told Damascus Bureau that prior to the revolution female participation in sports was considered inappropriate in Kurdish towns.

“The revolution changed all these perceptions and beliefs,” he said.

“Today, we have three women football teams and aspire to have more. We have started to hold football tournaments and the events have sparked great enthusiasm amongst competing teams. They have also become a source of inspiration and an incentive for new players to join us.”

Muheddine Tamu, head of a sports club that hosts training sessions, told Damascus Bureau that he was impressed by the newly-formed teams.

“In the past, we had female volleyball, basketball and athletics teams, but there were no official women’s football teams or matches such as the ones we have today.”

The union has a Facebook page where it promotes its activities and attempts to reach out to new players. The page publishes photos of the friendly matches it organises, in addition to the results and prizes distributed to winning teams.

Games are played in a spirit of friendship. One early match, held on December 4, 2015, between Kalzar and Amuda began with both teams greeting each other and exchanging flowers.

One player, Hiba, told Damascus Bureau that she enjoyed competing but the main reason she liked taking part was to make new friends.

“Not only do we strengthen our existing friendships through these games, we also make new friends from other cities,” she said.

“We exchange phone numbers and social media details then keep in touch, exchanging photos taken of us while we are playing. Together we are creating new memories which we will tell our children about in the future.”

Haj Zubayr, an Amuda community leader, said, “It’s nice to see our girls delving into the world of football.

“It’s a shame when people are held back by conservative traditions, therefore we will continue to encourage and support our female players.”

But some negative attitudes remain. Rula, 21, has been inspired by the games and wants to join one of the teams. Until now, her father has opposed the idea and Rula has had no choice but to continue to try and convince him.

Each of the teams had its own challenges to solve. The Amuda team suffered from lack of funding and organisation, co-founder Penkeen Tatar told Damascus Bureau.

“Things were very difficult for us at the beginning, but the union supported us and now – one year on – the team is well established. Its players have developed outstanding skills in both speed and technique,” said the 39 year-old.

Tatar is especially pleased with the support and encouragement players’ mothers have been providing their daughters.

The Martyr Kelzar team, formed in Qamishli in April 2015, faced problems of a different nature. Despite the fact that team members dressed modestly and all training and matches took place indoors, they found it difficult to recruit players.

“We had a slow start when we were formed,” said team coach Rudi Zaza.

“It was not easy to persuade the conservative families who live in Qamishli to allow their daughters to play, so we only had three players.”

To encourage young women to join, the union hired a vehicle to take players from its office in Qamishli directly to and from the stadium.

Another difficulty was how self-conscious the members were when playing in front of spectators, which hindered their performance.

According to 37 year-old Zaza this is no longer a problem. Today the team has 15 strong players who have become proud role models.

“The only thing that holds us back these days is the lack of female teams to compete against,” she said.

The third team set up by the union represents Hassakah.

“Our team was formed under extreme circumstances very different to those of teams from Amuda and Qamishli,” said one player, Juan. “It was formed during a period when fear ruled Hassakah due to the intense clashes and shelling raging the city.”

Despite the danger, team members were determined to succeed.

“We trained in indoor arenas, and despite the fact that the buildings could not protect us from the gunfire and shelling, we remained calm and committed,” the 29-year-old continued.

The Kurdish Democratic Youth Union, established in 2013, played an important role helping all three teams overcome the obstacles they faced.

Its head of sports activities Dijwar Tawfiq stressed how important it was for Syria’s youth to participate in games and athletics as a means of relief from the on-going war.

“We seek to create a new reality for our youth, pushing them out of the circle of seclusion they have become encaptured in,” said 25 year-old Dijwar, adding, “Sports should be used as means for co-existence, therefore we hope to create a team of football players that is not exclusive to Kurdish players.”

Shafan Ibrahim is the pseudonym of a Damascus Bureau contributor from Hassakah, Syria.

Speaking Out: Women's Voices from Syria
Syria
Women
Connect with us