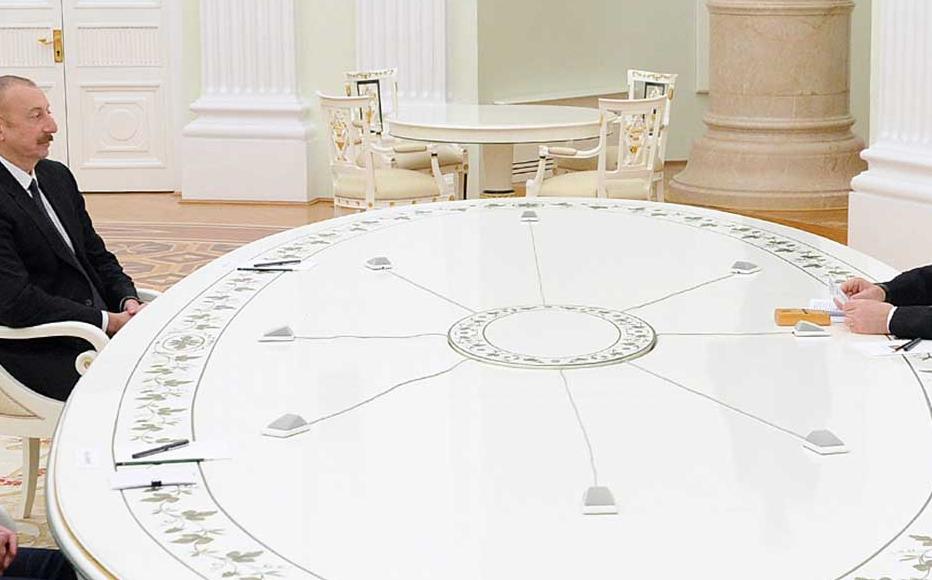 President Putin, President Aliyev, and Prime Minister Pashinyan meet to discuss the unblocking of transit routes. © Press Office of the Armenian Government
The link has been copied

Armenian analysts have cast doubt on how much the country is likely to benefit from the planned reopening of regional transport corridors following the recent war in Nagrony Karabakh.

A new agreement envisages Armenia guaranteeing the security of transport links between Nakhichevan and the western regions of Azerbaijan. Citizens, vehicles and goods will enjoy unimpeded movement in both directions, supervised by Russian security services.

According to the joint statement from the heads of states of Russia, Armenia and Azerbaijan issued after their January 11 meeting in Moscow, a working group headed by the deputy prime ministers of the three countries will deal with transport links and economic issues.

Russian newspaper Kommersant published a map of the transport corridors in question. This showed Azerbaijan gaining access to one corridor and railway from Nakhichevan through Armenia’s southern Syunik region to the Azerbaijani-controlled part of Karabakh. This would also connect Azerbaijan to Turkey.

However, much remains undecided in terms of both technical arrangements and time frames.

“Whether roads will open before the railway or vice versa is unclear,” said Hayk Gevorgyan from ruling My Step faction.

He noted that Azerbaijan had estimated that reconstructing a section of railway from Agarak to Horadiz, which used to be under Armenian control, would take at least two years.

“Before that, opening the vehicle routes should be discussed,” Gevorgyan added.

“Why go to Baku from Yerevan through Nakhichevan and then Russia, if Kars-Akhuryan through Ghazakh to Russia cuts the road by 250 km?” he asked.

Because this shorter route would involve more Armenian territory, revenue from transit fees could double or even triple.

Some maintain that freeing these channels will be an economic win for Armenia. Minister of economy Vahan Kerobyan outlined what he said would be the opportunities for Armenia as a result of unblocking regional transport corridors.

In the short term, he said, “competition results in better products,” while in the longer term, he continued, “Our products could be exported to Russia and other countries via better roads than they are now.”

Critics disagree, warning that domestic instability would only escalate in the face of direct competition with the more powerful economies of Turkey and Azerbaijan.

Avetik Chalabyan, leader of the National Agenda opposition party, said that unblocking regional transport corridors would only be possible under conditions of permanent peace.

He argued that Karabakh needed to be given some kind of internationally recognised status, the Armenian settlements occupied by Azerbaijan in the most recent conflict should be freed, with displaced Armenians able to return to their homes with security guarantees and all prisoners of war released.

“Otherwise, it turns out that we place the cart before the horse,” he said. “There is no peace, but we are trying to establish transport communication through mutual territories, which is not realistic.”

While officials state that Armenia is interested in cargo transportation to Russia and Iran via Azerbaijan, experts are less upbeat. Any potential benefits, some fear, may be reaped by Azerbaijan, Turkey and Russia rather than Armenia.

“The route to Russia via that railway is two to three times longer than through Georgia,” said economist Hrant Mikaelyan, a researcher at the Caucasus Institute, adding that the new route would also be vulnerable to arbitrary closure by others.

“Now we are going to have a corridor in Armenia proper, which will be controlled by a third party, Russia, and corridors controlled by Azerbaijan,” he concluded.

The security risks of opening these corridors could also not be ruled out, given the disruption to the balance of power in the region.

“Those risks are too high in the face of an unfinished war and by providing the enemy with a passage through our territory, we open an additional door of potential aggression against our country, it is quite obvious,” Chalabyan stressed.

While the Armenian ministry of economy has not yet published its calculations, their argument is that Armenia has the potential to grow a significant transit economy.

“We are going to develop a programme that will prepare us to reap all the benefits that unblocking of the region may yield,” said the minister.

Chalabyan said that an Armenian railway route through Nakhichevan might at best lead to an increase in transit from Iran to the Black Sea as well as in the opposite direction.

However, if international sanctions on Iran increased, this might massively reduce any possible flow of goods.

“Therefore, at this moment we should focus not so much on abstract talks about opportunities, but on the restoration and strengthening of our security system, which has been really disrupted as a result of the war,” Chalabyan concluded.

Giving Voice, Driving Change - from the Borderland to the Steppes
Armenia
Economy, Reconstruction, Diplomacy
Connect with us