Local Georgians feel they have been abandoned to face disaster alone.

Local Georgians feel they have been abandoned to face disaster alone. 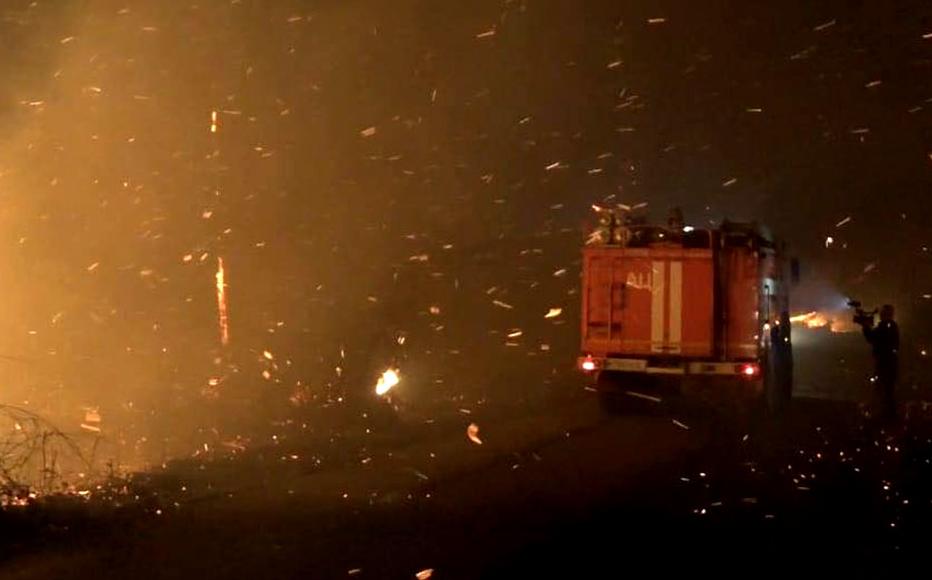 A fire rages on a nut plantation in the village of Lower Barghebi, one of the hardest hit areas by the fires in Abkhazia.
The link has been copied

Naira Shelia, 61, said that she and her family had been lucky to escape alive when wildfires recently swept through her village in the Russian-occupied Gali region of Abkhazia.

With houses closely packed to each other, the flames quickly engulfed the village. Shelia, who lives in her brothers’ house with her disabled son, said it was horrifying to see how the fire spread.

To make matters worse, she continued, “This is the third time our house has been burnt down and we have been left homeless. It is unfair.”

According to preliminary data, the fires in Abkhazia affected more than 200 families and destroyed 700 hectares of hazelnuts, a major local crop.

Like Shelia, many Georgians in Gali - having been displaced by two rounds of fighting in the last three decades - link these previous traumas to the wildfires that swept 11 villages between January 2 and 4 this year.

“Our tragedy began in 1993, the first time we had to flee because of the war,” Shelia explained.  “Then, years later we returned home, while my brothers stayed in Tbilisi and lived in a small refugee centre. I could not live in a tiny room with my child and so returned to the village again. My house was burnt down but with the help of my neighbours I was able to start life from scratch. Then, again, in 1998 the second wave of the war hit us and the same picture was repeated.”

The conflict began nearly 30 years ago when Abkhazia broke away from Georgia and demanded independence. The war resulted in mass casualties on both sides and displaced about 300,000 people.

Some locals, including Shelia, returned to their homes after the initial round of fighting ended, meaning that Gali was once again effectively under the control of ethnic Georgians. In 1998 however, when guerrilla groups attempted to return Gali, the local Georgians were once again displaced.

According to reports at the time, 6,000 houses were burnt down in the armed conflict, and dozens of combatants killed.

Konstantin Pilia, the head of the de facto Gali administration, told a local TV channel that a special fund was being set up to help the victims.

However, locals are sceptical that anything will be done for them, as neither has any assistance yet been forthcoming, nor has a commission been set up to calculate the amount of damage.

Nut and citrus plantations constitute the local population’s main source of income. While Givi Abakelia saved part of his home in January’s fires, five hectares of his hazelnut plantation with an annual crop of nine-11 tonnes of nuts were completely burnt. He said that in the days since the disaster, he had received no offers from help from either the Georgian or de facto Abkhazian government.

“We just learned from the TV, both Abkhazian and Georgian, that they are documenting the losses and are going to provide us with aid. We are left homeless, I do not know what to do in this burnt-out place,” he said.

Although the Georgian side immediately offered assistance to Abkhazia, Sergei Shamba, secretary of the breakaway republic’s security council, told a local television station that they did not need help from Tbilisi.

Abakelia said that his community had felt abandoned for many years now.

“There are families who have lost absolutely everything,” he continued. “Their house, hazelnut plantations and cattle were all burnt. We hope that international organisations will support us, I hope we’ll be provided with medication and food, we are on the brink of starvation. How long can we stay outdoors? The border has been closed for almost a year due to the pandemic but we ask for help.”

Some locals suspect foul play in the devastating fires. Shelia said that she did not know whether the blaze that destroyed her home was “due to an accident or deliberate action”.

Others, who asked to remain anonymous, were keen to expand on this theory.

He recalled how he and is neighbours had struggled to try and quell the fires for several hours before two fire engines and “about ten firemen” finally appeared.

“How could they possibly handle a fire in 12 villages with this force... their equipment was so outdated that they could not even pump the water out of the well,” he continued.

“After the death of a human being, there is no greater tragedy than seeing the property which you had been building up for so many years with hard work under fearful conditions turned to ashes in front of your eyes.”

The man said that no assistance had been forthcoming from the six Russian military bases located in Gali.

“People thought that they would help, but the Russians do not care, they are happy to see our people in such conditions, they behave like they did not even notice anything. Later, we saw them looking at our burnt houses and taking pictures.”

Another local, who also asked to remain anonymous, agreed.

“Gagra is the most beautiful place in Abkhazia [but] when the Gagra forest was set on fire and there was a threat that the fire would spread to the city, Russia did not send a helicopter,” he said. “It is not surprising that they do not care for us at all. It is a part of Russian politics to create unbearable conditions for local Georgians so they will be forced to leave and go to the other side of the River Enguri.”

Giving Voice, Driving Change - from the Borderland to the Steppes
Abkhazia
Internally displaced
Connect with us