Yerevan accuses the Parliamentary Assembly of the Council of Europe of taking a pro-Baku stance.

Yerevan accuses the Parliamentary Assembly of the Council of Europe of taking a pro-Baku stance. 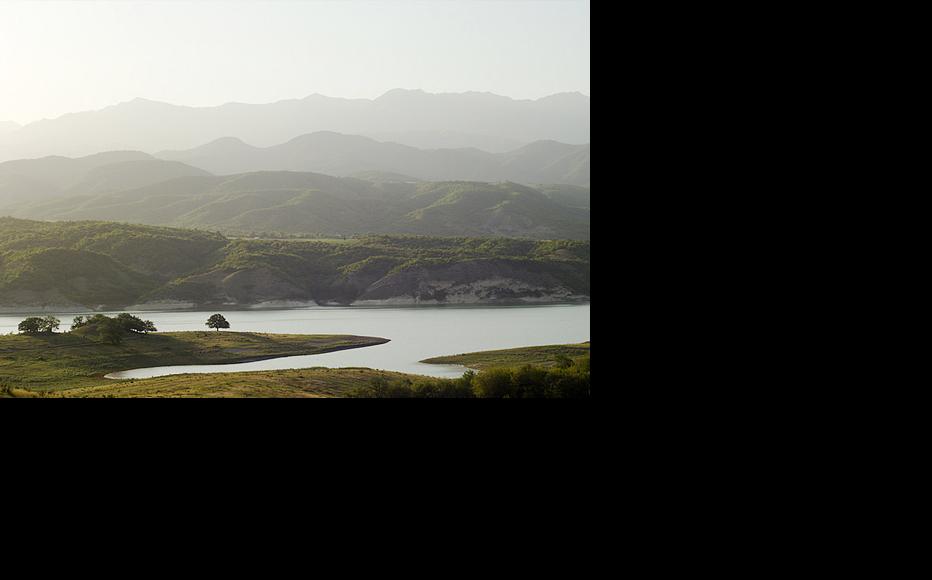 The Sarsang reservoir lies inside Nagorny Karabakh and is controlled by Armenia. (Photo: Norayr Chilingarian/Flickr)
The link has been copied

Armenia has reacted angrily to accusations by a European body that it is “deliberately” depriving border regions of Azerbaijan of water.

The January 26 resolution issued by the Parliamentary Assembly of the Council of Europe (PACE) said that more than 20 years of neglect of the key Sarsang reservoir posed “a danger to the whole border region.”

The state of disrepair of the reservoir, which lies inside Nagorny Karabakh and is controlled by Armenians, could lead to a “major disaster with great loss of human life and possibly a fresh humanitarian crisis,” PACE said.

However, critics in Armenia and Nagorny Karabakh accused PACE of supporting Azerbaijan’s viewpoint rather than looking at the situation objectively.

“We should no longer allow that PACE regulations are used to confirm such one-sided reports,” said Tevan Poghosyan, a member of the Heritage faction of Armenia´s parliament and part of the parliamentary committee on foreign relations. “In reality, Azerbaijan wanted to receive an official document, which can then be used in other institutions, quoting the language of the report.”

PACE had called for the immediate withdrawal of Armenian forces from the region as well as an independent survey and international supervision of the reservoir.

Its report was prepared by Bosnian lawmaker Milica Markovic , who came under fire from Yerevan for failing to visit Nagorny Karabakh and Armenia during the preparation of the report, despite having been invited. However, she visited Azerbaijan twice.

In her report, Markovic said that she had been unable to visit Armenia due to “the lack of co-operation of the Armenian delegation”.

Built in 1976 on the Tartar River at an altitude of 726 metres above sea level, the Sarsang reservoir used to provide water for drinking and irrigation to the territory of Nagorny Karabakh as well as six adjoining regions of Azerbaijan. It had the capacity to hold 560 million cubic metres of water.

After the 1994 ceasefire following the Nagorny Karabakh war, Azerbaijan could not longer use the reservoir.

The co-chairs of the Minsk Group, the tripartite body set up by the Organisation for Security and Co-operation in Europe to support peace talks in Karabakh, had advised PACE against steps that might harm negotiations.

But Markovic told the Assembly that she had not been concerned with the political context.

“My task was to deal with social questions and humanitarian, social and environmental issues,” she said.

A second PACE resolution on the “escalation of violence in Nagorno-Karabakh and the other occupied territories of Azerbaijan,” raised on the same day was not adopted.

Nonetheless, Elkhan Suleymanov, the author of both resolutions and a member of Azerbaijan´s parliament and PACE delegation, welcomed the outcome.

“This was a historical victory for the people of Azerbaijan,”Suleymanov told the news agency APA.  “Although one of the reports was rejected, the main goal was to put Armenia´s aggressive policy on the agenda, and we have achieved that.”

The chairman of Azerbaijan´s opposition party Musavat, Isa Gambar, also said that the PACE resolution on Sarsang was a small but important move forward.

“I assess this PACE resolution as positive,” he told IWPR.  “It reflects reality. Humanitarian and environmental issues have always been a priority for PACE.  But the conflict has so deepened and involves so many external forces that the adoption of some new document can hardly affect the promotion of a peaceful solution.  But it is after all a small step in a positive direction,” said Gambar.

The Sarsang water supplies affect about 138,000 people living in Nagorny Karabakh and 400,000 people in other areas of the Lower Karabakh region in Azerbaijan, according to the PACE report.

Nagorny Karabakh´s prime minister Arayik Harutyunyan said Karabakh had offered to come to an agreement with Azerbaijan over sharing the reservoir in 2013.

“We sent messages saying we agree to cooperate in terms of using the water of the Sarsang reservoir on one condition, that we have access to the water, since the reservoir junction and some pipelines are under their control,” Harutyunyan said.

However, Baku rejects even negotiations over any such move. It regards Nagorny Karabakh as a separatist regime and will therefore not cooperate while what they deem to be an occupation is ongoing.

Currently, the Karabakh authorities use the reservoir only for energy purposes. The Sarsang hydroelectric power plant produces about 140 million kW per hour of electricity annually, according to Slava Gabrielyan, managing director of the Karabakh power distribution company Artsakhenergo.

Since the reservoir junction of the main canal of the Terter River is located on Azerbaijani territory, the Azeris can get water from the reservoir throughout the year, apart from the summer months.

Karabakh residents cannot access irrigation water at all, according to its deputy agriculture minister Gevorg Veranyan.

“While the Azerbaijanis may complain that they do not have the water, our residents are not only partially but fully left without water.  This stems from the lack of cooperation on the part of Azerbaijan,” Veranyan told IWPR.

In turn, Azerbaijan claims that the Armenian side frequently stops the water in the summer when it is most needed.

Then in winter, the water from the Sarsang reservoir is released, flooding roads and agricultural lands and damaging Azerbaijani agriculture.

Farmers on both sides continue to suffer the consequences.

Artur Ghukasyan, a resident of the Martakert region in Nagorny Karabakh, 15 km from Sarsang, has been a farmer for 40 years.  He told IWPR that before the war, water for irrigation came from the Tartar River.

“I basically grew grapes and produced a high quality crop.  Today, due to the fact that Azerbaijan has blocked the water spout that pumps the water coming to the territory, drought and desolation prevail in my once great vineyards.  Without irrigation in these areas, it is impossible to engage in agriculture,” said the farmer.

Ghukasyan said that local residents still hope that it will be possible to reach an agreement that will allow them to use the Tartar river waters.

For now, he can only cultivate a small vegetable garden in his courtyard.

On the Azerbaijani side, farmers are no better off.

Muraz Djafarov, a resident of the border village of Qizilhacili in Goranboi district, cannot irrigate his three hectare plot. In the past, water did reach his land from the Sarsang reservoir, but not any more.

“About five years ago, the water came from there, though with interruptions,” he said. “Now, the water flows only in winter when farm work is not carried out, and in the summer it is blocked... Our only [other] source is the Goranboi River, and the level of water in it decreases every year.  We earn our living only from the land, which has to be irrigated.  Now our situation is critical,” Djafarov concluded.

Vernayan said that PACE should have taken a different approach if it really wanted to improve the environmental and humanitarian situation.

“It would be more correct if PACE helped Nagorny Karabakh, for example, join the International Commission on Large Dams (ICOLD) to attract high-calibre European specialists to re-evaluate the safety of the dam, re-simulate breaking waves, calculate the area prone to flooding, develop recommendations for a joint response and so on,” Veranyan said.

“It would be better if international credits and other assistance were granted for the modernisation of the dam and the training of specialists and for the restoration of the canals which have not been operated for more than 25 years.  That would be real help, both for Azerbaijan and for the people of Nagorny Karabakh.”

Veranyan said that sharing the resources of the reservoir could be advantageous for both sides.  At the moment, 44,000 hectares of the territory adjoining Sarsang belong to Nagorny Karabakh and 100,000 hectares to Azerbaijan.

The dam reservoir is expensive both to use and maintain, so the income generated by the hydroelectric power station is mainly dedicated to its upkeep.

Veranyan said that Karabakh cannot simply wait for the day when Azerbaijan may agree to a joint use of the reservoir.

The Karabakh government is now planning to divert the Terter River so as to supply water to the 40,000 hectares of land left without irrigation, at a cost of more than 10 million US dollars.

“Construction will start in the near future because it makes no sense to wait,” Veranyan said.

“At the same time, the adoption of this resolution is also a strategic mistake, for two reasons,” he continued. “First, given the complete absence of any gestures of goodwill or confidence-building mechanisms, this resolution dismisses and denies the chance for building an environment more conducive to restoring communication and regaining confidence on all sides.

“Second, the strategic mistake was also demonstrated by the willful disrespect and disdain for the OSCE Minsk Group mediators, who legally hold the sole diplomatic jurisdiction for the Karabakh peace process,” Giragosian continued.

The PACE decision underscored the need to establish new ways of building confidence, he added, suggesting that one priority would be to again offer Azerbaijan the opportunity to share Sarsang’s resources.

Political scientist Stepan Grigoryan, head of the Analytical Centre on Globalisation and Regional Cooperation (ACGRC) in Yerevan, also suggested that the Armenians take the initiative to institute its own resolution aimed at a joint, peaceful solution to the Sarsang reservoir.

“This will obviously be a positive step that will unite and not divide the parties.  You can unite Armenian, Karabakh and Azerbaijani engineers and conduct a rehabilitation programme,” he said.