Ledici has just two residents after everyone else died or fled from a 1992 attack. 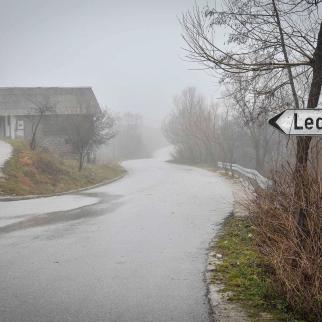 Ledici now stands all but deserted, high in the mountains south of Bosnia’s capital. © Sanja Vrzić

Images of Ledici, deserted after war swept through a small Serb community.

Ledici has just two residents after everyone else died or fled from a 1992 attack. 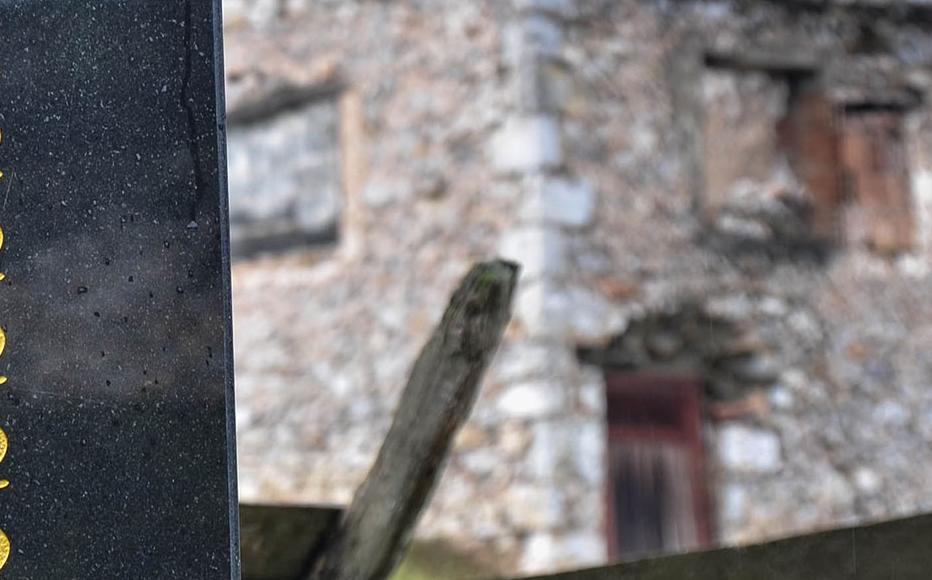 Monument to 24 civilians from Ledici killed in June 1992 at the start of the Bosnian war. © Sanja Vrzić 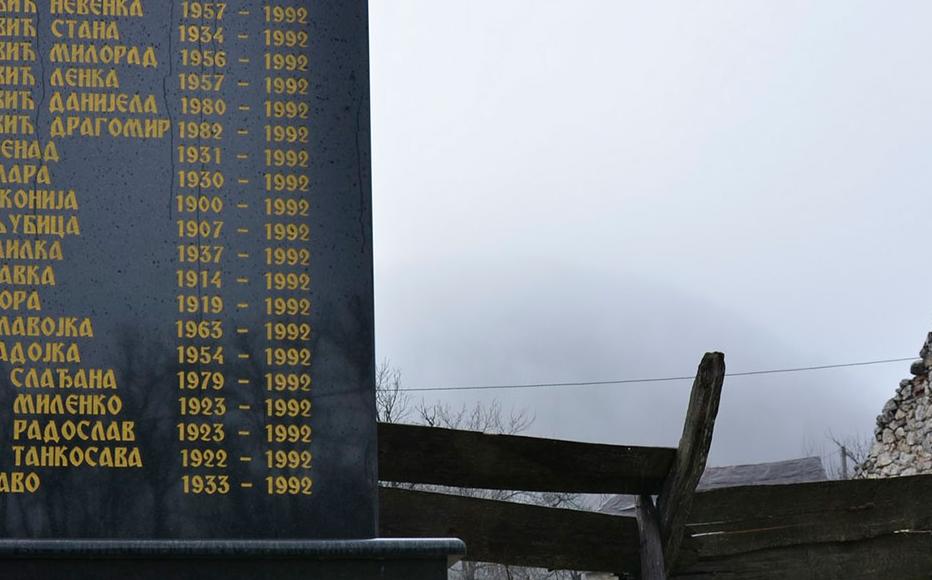 Ledici was a Serb village in a mainly Bosniak region. © Sanja Vrzić 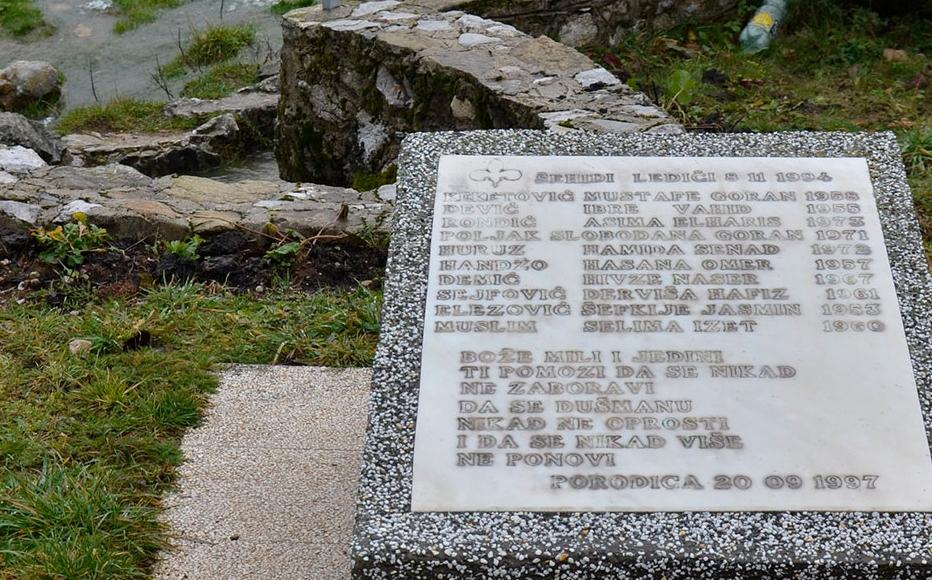 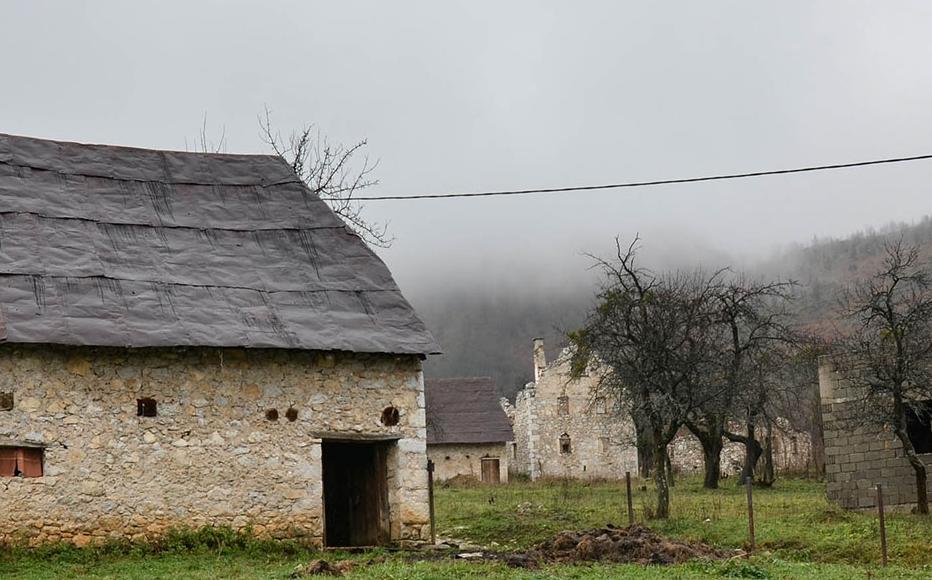 Few houses are still intact, and the authorities have not funded the reconstruction work carried out elsewhere. © Sanja Vrzić 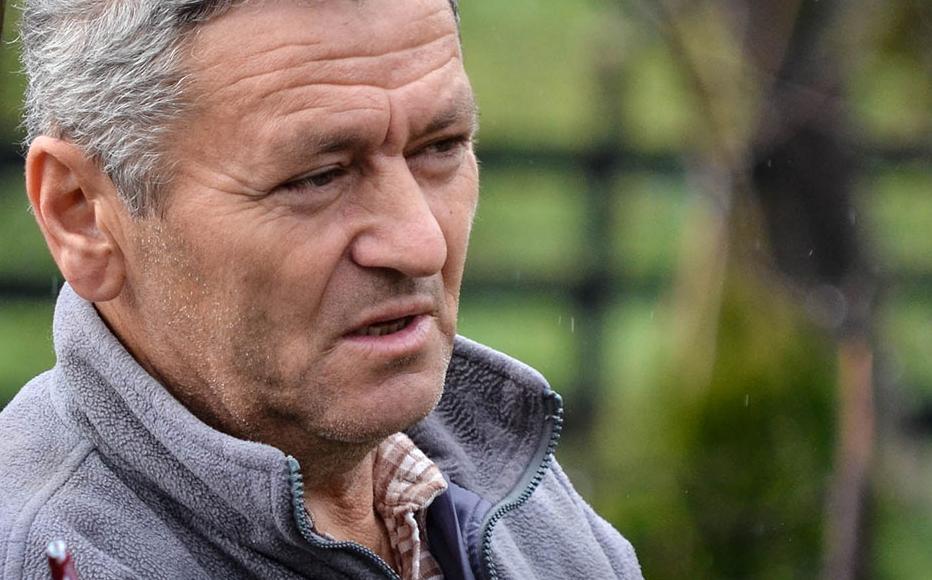 Obren Miovcic is one of two people left in the village. The other is his wife Dragana. © Sanja Vrzić
The link has been copied

In the centre of the small village of Ledici, still shrouded in the mist of a cold November morning, an elderly man points at the ruined homes.

“People from all these houses that you see were killed in 1992. The entire Tesanovic family from Ledici was murdered,” Obren Miovcic said.

Only two people now live in Ledici, a ghost settlement in south-eastern Bosnia. One is Miovcic, the other his wife Dragica. Their neighbours, all Serbs like them, were either killed in the village or escaped from it at the beginning of the 1992-95 war in Bosnia.

Ledici is one of the many small villages nestled among the Bjelasnica and Treskavica mountain ranges, some 40 kilometres south of the Bosnian capital Sarajevo. Before the war, Ledici was populated by Bosnian Serbs, while the residents of neighbouring villages like Dejcici and Dujmovici were Bosnian Muslims (Bosniaks).

Ledici - a Forgotten Village - Video by Ajdin Kamber, IWPR-trained reporter. (This video has no commentary)

Ledici is hard to get to even during summer, while in winter it is almost completely cut off from the rest of the world. IWPR’s reporting team arrived there in November, after a long drive up a narrow dirt track which offered breathtaking views of the mountains.

When we got out of our car, we were greeted by an eerie silence, broken only by the gurgling of a muddy mountain stream that runs through the village.

The village looks frozen in time, just as it was left after a devastating attack by Bosniak forces more than two decades ago. Most of the houses remain as they were, burnt-out or smashed by shellfire. The Miovcics’ home is among the few that have been rebuilt.

“At the beginning of the war, there were around 70 people in the village, many of them children,” Miovcic recalled.

As first-time visitors to Ledici, we were puzzled to see not one but two marble plaques a few metres apart at the entrance to the village.

One of them lists ten names, mostly Bosniak, and shows that they all died in 1994. Miovcic said this memorial was put up by the Bosniak authorities in the nearby town of Trnovo to commemorate a group of Bosnian army soldiers killed by a mortar in 1994.

The other plaque bears the names of 24 Serbs inscribed on it, with the years of their birth and death – the latter all in 1992. This was erected by survivors from Ledici in memory of the civilians killed in June 1992. The oldest was 92, the youngest a 15-month-old baby.

“On the evening of June 3, 1992, Muslim forces from the neighbouring village of Dejcici surrounded the village and attacked us. They shelled the village, and after a few days we had to leave because we couldn’t stay any longer,” he said. “We had to escape into Serb-held territory, but some of us didn’t make it. It was mostly elderly women and children. They were all killed.”

An investigation carried in 1994 by the interior ministry of Republika Srpska, RS – one of the two administrative entities in Bosnia and Hercegovina – found that Ledici residents fleeing the village split into two groups. One went over the Treskavica mountains towards Vojkovici, while the other headed for Kalinovik. Both towns were under Bosnian Serb control at the time.

According to the investigation, the second group was ambushed by Bosniak forces and all of them were killed, except for one 11-year-old boy, found lying injured among the dead. The boy was said to have been saved by a Bosniak doctor from the area.

Obren and his wife were part of the group which managed to reach Vojkovici unharmed.

It took until 2001 to exhume the remains of all 24 victims, although skeletons were incomplete and skulls were found detached from the bodies. According to the RS interior ministry report, the villagers of Ledici were killed in brutal manner by their captors – slaughtered like animals, hanged or suffocated.

Although the RS authorities handed over their findings and evidence to state prosecutors in Bosnia and Hercegovina, no one has ever been charged with the killings.

“The sad thing is that no one has ever been tried for these crimes,” Miovcic said. “We know who killed those people and the perpetrators are still free. The prosecution has all the information, but nothing is being done about it.”

The state prosecutor’s office told IWPR it was aware of the case and was investigating crimes against Serbs committed in the area. But since the investigation was still under way, it could not provide further information.

Looking back now, Miovcic said he and the other villagers were completely unprepared for what was coming.

“Two days before the attack, three [Bosniak] men from the neighbouring villages of Dejcici and Dujmovici came to our village and said we shouldn’t attack one another because we were neighbors. Two days later, they attacked us”, he said.

Although he is disappointed with the lack of prosecutions, Miovcic said he now maintained good relations with the Bosniaks in neighboring villages.

“I don't hate anyone – God forbid! I care only about what’s really important, and that's the goodness in people,” he said.

As we talked, the mist that had covered the village when we arrived thickened into fog, so that even the objects closest to us became almost invisible. It was a reminder of the hostile winter environment in these mountain villages, where the weather can change abruptly.

Each winter, Obren and Dragica Miovcic have to leave Ledici and go down to stay with their children in Sarajevo. There is not enough firewood for heating, and the electricity supply is erratic. When it snows, the road is not cleared and Ledici is cut off.

Miovcic says he is disappointed that the local authorities have shown so little interest in rebuilding the village and making life there more bearable.

Ledici is located in Trnovo municipality, part of Bosnia’s bigger entity, the Bosniak- and Croat-dominated Federation. Miovcic suspects the lack of interest shown by local officials, who are Bosniak, has a lot to do with the fact that Ledici was a Serb settlement.

“We have been submitting requests for a proper road to be built, but nothing has come of it. The power supply is really poor as well,” said Obren. “The municipal authorities keep promising to do something, but nothing ever happens”.

When he returned after the war, he found the village completely destroyed, including his own house, which he decided to rebuild. The only help he received from the local authorities was 2,700 Bosnian convertible marks, worth about 1,400 euro, and 100 sacks of cement

“I could barely pay the bricklayer with that money, so I did most of the work myself,” he said.

Mirsad Mesic, an aide to the mayor of Trnovo municipality, said it was becoming increasingly difficult to source funding to restore housing and infrastructure damaged during the war. Donor aid from the international community was plentiful in the early postwar years, but it has now dried up, he said.

At the same time, Mesic said a lot of reconstruction work had been carried in Trnovo municipality, and no favouritism was shown to any ethnic group .

“Every village has a passable road, electricity, water and telephone lines. Using donated money, inhabited villages were rebuild regardless of the nationality of the people living there,” he said. “The reason Ledici is still in ruins is that there wasn’t an organised return, and people sold up their properties. If there had been people in Ledici, this village too would have been rebuilt.”

Miovcic is unconvinced. He believes Ledici was deliberately left out of reconstruction funding because the Bosniaks in charge were not too eager to encourage Serbs to return. Such attitudes have not changed, he claims.

“Whoever I turn to, they all know I’m Serb, so they ignore me,” he said. “I don’t see any solution to this.”

He sees the situation in Trnovo municipality as a reflection of how things are in Bosnia generally.

“Just look at all the divisions at the highest levels of government in Bosnia, and then try to imagine how that impacts on people like us living in rural areas. Every one is playing on ethnic tensions. People are like sheep – where one goes, others follow,” he said.

Looking around at the ruined village enveloped in thick fog, he sighed and said, “We’re at least a hundred years behind the rest of the world.”

Nejra Suljovic and Drazen Huterer are IWPR-trained reporters in Sarajevo. Photos by Sanja Vrzić, an architect, photographer and graphic designer in Sarajevo.

This article was produced as part of IWPR’s Tales of Transition project funded by the Norwegian Embassy in Sarajevo. IWPR is carrying out this project in co-operation with the Sarajevo Centre for Contemporary Arts and EFM Student Radio.