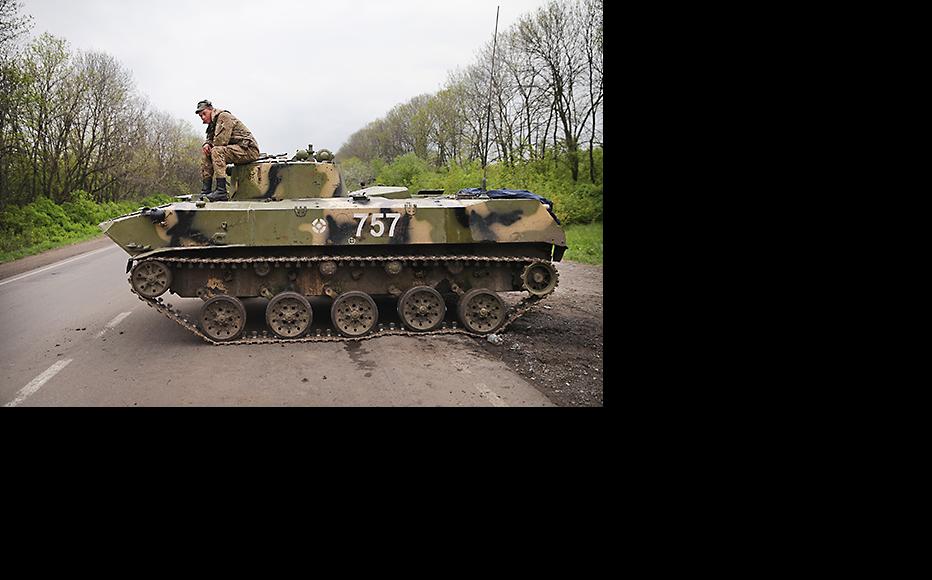 The Ukrainian military guards a roadblock near Slavyansk. April 30, 2014. (Photo: Scott Olson/copyright Getty Images)
The link has been copied

The recently reintroduction of conscription in Ukraine has been unpopular, with many young men unwilling to join a badly-resourced army to fight separatist forces in the country’s east.

However, thousands of volunteers in several dozen paramilitary units appear ready to pick up the slack.

Ukraine had compulsory military service until early this year, although many 18-year-olds avoided enlistment, citing health reasons or religious objections. Conscription was reintroduced in May by interim president Oleksandr Turchynov in response to the ongoing crisis.

After training for one year – or nine months for university graduates – conscripts can return to civilian life, but are required to remain available in the reserve. That means that the armed forces, currently numbering around 130,000, could be massively boosted by reservists, but the military remains badly resourced and trained.

Kevlar helmets and modern communications equipment are considered luxuries, and volunteers have been collecting money to buy and deliver kit to units in the east.

The defence ministry even ran a funding appeal in which donations of five hryvnas (50 US cents) could be made by SMS text. The appeal netted hundreds of thousands of dollars to help soldiers who often lack body armour.

The response to the call-up has been less than enthusiastic.

“People don’t come to our office,” an official from the military enlistment office in Zhytomyr in northwest Ukraine, told local journalists in April. “Yesterday we sent out 350 notices and no one came. The people who do come are 45 years old, with all their ailments. I don’t want them joining the army.”

“My sister told me about a mutual acquaintance who got a notice as a reservist,” Volodymyr Parasyuk, a well-known Euromaidan activist, wrote on his Facebook page. “But instead of joining the army, he bribed the doctor, who invented a fantastic disease especially for him.”

There are, however, many others who are willing to engage in the fighting in the east.

Interior minister Arsen Avakov announced on June 16 that 30 volunteer battalions had been formed, with a total of 5,600 combatants. Of this number, around 3,000 were already serving in eastern Ukraine.

Some units like the Azov Battalion have been subordinated to the interior ministry and incorporated into the reconstituted National Guard – at least in theory.

“Azov are men who organised themselves to fight for the freedom of Ukraine,” declares the battalion’s official Facebook page. “We don’t need a command from above to defend us from gangsters, separatists, ‘little green men’ [Russian soldiers without insignia] and other devils.”

The page goes on to make it clear that “the Azov men cannot be stopped at the command” of the Kiev authorities.

Dmytro Lynko, 26, signed up to fight with the Azov unit a month ago. Since he had previously avoided conscription, his firearms experience was limited to funfair shooting galleries.

“I decided to join Azov because a lot of my friends from Maidan had done the same,” he told IWPR. “I didnt plan to join the regular army because they might send me to rearguard service. I am a patriot and I wanted to go and fight from the time Crimea was occupied, but there were no military operations at that point.”

Lynko was quickly promoted to the rank of company commander, and his most recent battle was in Mariupol, in the Donetsk region, when the city was held by separatists.

After Ukrainian troops regained control of Mariupol earlier this month, Lynko returned to Kiev for a short spell of leave, but he plans to return and fight on.

The volunteer battalions draw their funding from either the state or from private donors, with each fighter receiving about 400 dollars a month.

The best-paid unit is said to be the Dnipro battalion, formed in April 2014 with backing from the interior ministry from Igor Kolomoysky, a wealthy businessman who is governor of the Dniepropetrovsk region.

Privates in this well-supplied battalion are paid 1,000 dollars a month and officers between 3,000 and 5,000 dollars.

Then there is the Donbas territorial defence battalion, numbering around 900 fighters, many from the eastern regions, who have sworn to lay down their arms only when the separatists are completely defeated.

In an interview with the Ukrainian Channel 24 television network, a Donbas member who identified himself only as “Doberman” explained his motivation.

“I was born in Georgia, spent ten years in the Georgian police, and then I met a girl from Ukraine, married her and we have a son,” said the 39-year-old, his face hidden by a black balaclava, a Kalashnikov rifle in his arms, and a soiled flag of the separatist Donetsk People’s Republic under his feet.

“I've been living in Ukraine for five years and I’m ready to defend the integrity and independence of this country. Actually it isn’t a war, but... an indirect invasion,” he said, adding that he had tried unsuccessfully to join the army. “Then I started to search for some other ways to fight. So I found myself in Donbas and I’m really happy.”