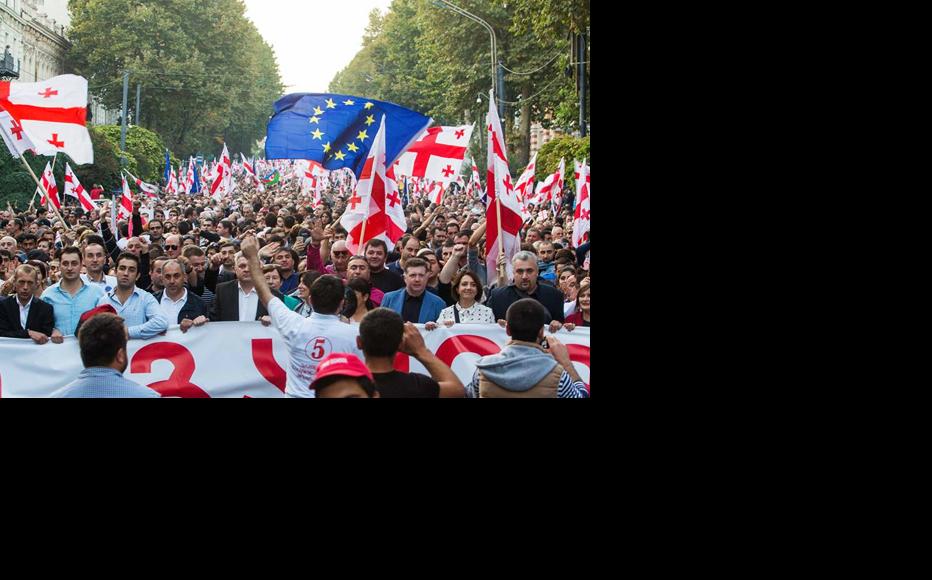 Thousands of supporters of the United National Movement (UNM), Georgia´s largest opposition party, rallied in Tbilisi on October 5, three days before the parliamentary elections. (Photo: UNM)
The link has been copied

A spate of violence has marred the final stretch of campaigning for Georgia’s October 8 parliamentary elections.

A 16-year-old was killed after an argument with members of the audience at a concert organised by the ruling party Georgian Dream-Democratic Georgia on the outskirts of the capital Tbilisi on September 30.  The next day, a party activist was hospitalised after being hit on the head by a stone.

On October 2, there was a shooting incident at an open-air campaign speech by former minister of defence Irakli Okruashvili in the town of Gori in eastern Georgia.   Two of his bodyguards were injured.

The rear section of the vehicle was severely damaged. Targamadze, from the United National Movement (UNM), and the driver escaped with minor injuries.  Four passers-by had to be taken to the hospital.

Deputy minister of internal affairs Besik Amiranashvili announced that a criminal case for attempted murder under aggravating circumstances would be opened.

“Forensic experts are working at the site and conducting all primary work.  In the nearest future, we will try to establish the truth,” he said.

A senior UNM figure, Giga Bokeria, told journalists that former prime minister and Georgian Dream founder Bidzina Ivanishvili should shoulder some of the blame for the violence.

He and his team, who “have destroyed institutions for four years and have made intelligence agencies their puppets for political purposes, are guilty of creating such an environment,” Bokeria said.

Experts believe that these elections are particularly important, as they will re-confirm that a peaceful change of power in the country can once again take place through a public vote.

Tornike Sharashenidze, a professor at the Georgian Institute of Public Affairs (GIGA), told IWPR that the spate of attacks was “very bad for the entire process”.

Georgian Dream and the UNM are neck and neck in opinion polls ahead of Saturday´s vote.

Georgian Dream, originally a coalition of six parties, came to power in 2012 after voters became disenchanted with the rule of former president Mikheil Saakshvili´s UNM.  He became Georgia´s leader during the Rose Revolution in 2003 and turned more authoritarian over time.

Saakashvili now lives in Ukraine, where he has taken up citizenship and serves as a regional governor.

The political scene in Georgia is highly fragmented.  According to the Election Administration of Georgia, 25 election categories have been registered, including six election blocs.  Sixteen political parties were united in these blocs.  The registration of 29 further parties was rejected, cancelled or annulled.

Georgia has a unicameral parliament with 150 seats, of which 77 are filled by proportional representation.  The other 73 are elected using a first-past-the-post system.  Lawmakers serve a four-year term.

(See also Georgia Reaches Out for the Ethnic Vote and Georgia Gears Up for Parliamentary Elections).

A survey conducted by GFK Customs Research and published a week ago showed that 25.4 per cent of those polled intend to vote for Georgian Dream and 26 per cent for the UNM.

According to this latest survey, which was commissioned by the TV station Rustavi-2, no other party will pass the five per cent threshold.

However, just four months ago, a survey by the National Democratic Institute (NDI) found that 57 per cent of those polled were still undecided about how they would vote.

Based on this research, only four parties had a realistic chance of overcoming the five per cent barrier.

The Alliance of Patriots has a pro-Russian orientation and was founded after the 2012 parliamentary elections.  The State for People was established earlier this year by famous opera singer Paata Burchuladze.

According to the NDI survey, the top five issues people in Georgia care about are jobs, then poverty, territorial integrity, rising prices and inflation and pensions.

Georgian Dream in particular has been struggling to convince the electorate that it is not to blame for the country’s declining economy.

During the 2012 election campaign, it promised to boost the economy, halve taxes and create jobs.

However, the World Bank also noted that Georgia´s economic woes were due to large and potentially long-lasting external shocks that began in 2014.

“Lower oil and commodity prices, a decrease in remittances and capital inflow, and reduced exports have slowed growth, factors that also made the economy more vulnerable in 2015,” the World Bank said.

Rusudan Machaidze is a freelance journalist in Tbilisi.