"Veil of Secrecy" Drawn Over Srebrenica

"Veil of Secrecy" Drawn Over Srebrenica 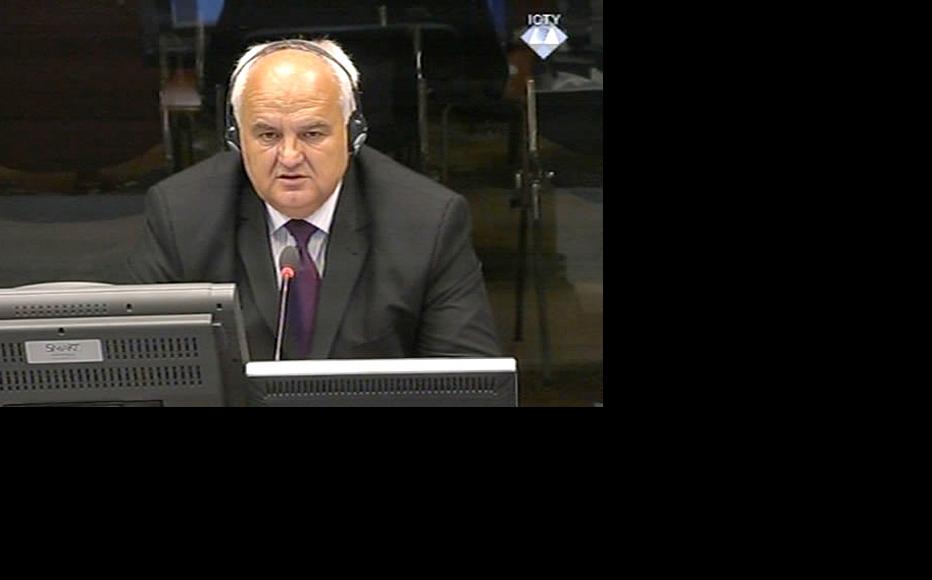 Dragomir Keserovic, prosecution witness in the Ratko Mladic trial. (Photo: ICTY)
The link has been copied

A former Bosnian Serb army officer testifying in the trial of army commander Ratko Mladic was repeatedly asked this week to explain how he could have had no idea killings were taking place during the 1995 Srebrenica massacre.

At one point during the cross-examination, Judge Orie noted that the chamber had previously heard evidence that a large number of people were killed after Bosnian Serb forces captured the eastern Bosnian enclave of Srebrenica on July 11, 1995.

He said the witness had used “vague language about going somewhere and observing what happens” when describing meetings that occurred a few days later with senior army officers, including Mladic.

“It is not easy for me to understand,” the judge said. “It’s all about capturing persons, but many persons, the evidence suggests, had already been captured and large numbers killed. This seems to have been known by no one.”

“It is not easy to understand, if you look at the restricted, limited geographical area and the impact [that] these facts, if true, would have had,” he continued. “Do you have any explanation for that? Was it mentioned in your presence? How should we reconcile the evidence we heard and evidence about what was said during the meetings?”

The witness, who was part of the army’s main staff and dealt with military police matters at the time when Srebrenica was captured, replied, “What I know is that at that time, and for a few months later, until the end of the war, in the [Bosnian Serb army] – at least where I was – there was no discussion of the circumstances under which POWs were executed.

“It is really something that even today, I cannot explain myself, or understand how and what happened, and how it was left under some veil of secrecy.”

“Who imposed that veil of secrecy?” Judge Orie asked.

“I perhaps didn’t mean to say there was a specific veil of secrecy, but it was all left secret in general in terms of how and what happened,” Keserovic said.

“Is it your testimony that no one knew at that point in time, in your environment, that as the evidence suggests, large numbers, persons [who had been] captured had been killed?” the judge asked.

“In my surroundings, no one talked about it and I didn’t know about it until some time in February 1996,” Keserovic said.

The judge pointed out that the evidence suggested the was a huge effort to bury the large numbers of bodies.

“You, in your position, had no idea that it happened or that the exercise was made to at least bury the bodies?” Judge Orie asked.

Judge Orie continued to probe the witness on whether he “couldn’t have noticed” what was happening during the time he spent there.

“Your Honour, what I saw and what I heard to the best of my recollection – it is what I shared with you,” the witness said.

Prosecutors allege that Mladic, commander of the Bosnian Serb army from 1992 to 1996, planned and oversaw the massacre of more than 7,000 Bosniak men and boys at Srebrenica in July 1995.

The indictment alleges that he was responsible for crimes of genocide, persecution, extermination, murder and forcible transfer which “contributed to achieving the objective of the permanent removal of Bosnian Muslims and Bosnian Croats from Bosnian Serb-claimed territory”.

Earlier in his testimony, the witness said that he arrived at the main staff’s headquarters in the Srebrenica area on July 16 or 17; he could not say for sure which day. Prior to that, he said he had been doing some work in the “western theatre”.

Keserovic said that at a meeting soon after he arrived in the Srebrenica area, Mladic instructed him to take over an operation that was already under way. The witness said the goal of this operation was to “sweep the terrain” of any Bosnian government army units and block them from breaking through to Tuzla.

This operation, Keserovic said, was being commanded by Vidoje Blagojevic.

Blagojevic stood trial at the tribunal and was initially sentenced to 18 years in prison for aiding and abetting the murder of Bosnian Muslims from Srebrenica. His sentence was later reduced to 15 years on appeal and he was granted early release in February 2012.

Prosecuting lawyer Peter McCloskey asked the witness what was to happen if Bosnian government units were encountered during the “sweep”. The witness replied that either “combat could be initiated”, or that the fate of these troops would be “regulated by the rules of the command staff combat service”.

“Or could it be regulated by what General Mladic wanted?” McCloskey asked.

“Well, I really cannot say what General Mladic wanted beyond the scope of what he ordered or what was contained in the assignment,” the witness said. “There were no other indications other than to continue with the blockade and to continue to sweep the terrain.”

McCloskey asked, “If General Mladic wanted to ignore the regulations and send prisoners somewhere else, he could have done that, I take it, couldn’t he?”

To this, Keserovic replied, “Perhaps General Mladic could say something like that, but no member of the army should have or could have dared to carry out anything in contravention of the rule, especially not anything that would imply commission of a crime.”

McCloskey asked the witness whether he believed that “thousands of men were summarily executed after the fall of Srebrenica”.

“It’s difficult whether I believe it or not. The circumstances, and whether this happened in a summary manner, is something that I did not see,” Keserovic said. “I cannot really state any position on that. The events and information that I received subsequently point to the fact there was unnecessary suffering by members of the [Bosnian government army] 28th Division and perhaps civilians who set off with them to break through.”

“You won’t say anything more than ‘unnecessary suffering’ happened to the people of Srebrenica?” McCloskey asked.

“I cannot. It’s not that I don’t want to. I cannot say anything about the nature of the suffering. This is a completely different analysis. I did not see the circumstances of their capture or detention,” the witness said.

Keserovic then said he objected to taking part in the sweep operation, which he called a “militarily unacceptable assignment”.

Here Judge Orie intervened again to ask the witness why he found the order objectionable.

The witness explained that he was not commander of any of the units participating in the operation, and did not have all he needed to run it. In addition, he said, he had never been to the area before, and was thus unable to make assessments about the terrain or the units involved.

“You were supposed to go there alone and do a job with your empty hands? That is really what Mladic asked you to do?” Judge Orie asked.

Keserovic said that “partly that was so”, adding that if he had been the commander of any of the units involved, he would have simply carried out the order.

“So the order was totally idiotic, is that what you’re saying? You don’t get the means, the troops, and someone asks you to do a job. That is pretty strange, isn’t it?” Judge Orie asked.

“That is pretty strange,” Keserovic agreed.

“There was nothing else that kept you from accepting that order?” Judge Orie asked.

“I had no other reasons other than military reasons. The military reasons were problematic,” Keserovic responded. “That is why preparations were needed. I was supposed to assume command at the same moment without gaining any information, any reconnaissance.”

The witness said that after he complained, Mladic rescinded the order and instead sent him to Bratunac on another assignment.

On the way to Bratunac, Keserovic came across Zoran Malinic, commander of a military police unit, standing by the side of the road.

Malinic told him that “at the stadium at Nova Kasaba, in his assessment, there were between 2,000 and 2,500 captured and disarmed Muslims – fighters and civilians from Srebrenica”.

During this conversation, he said, Malinic told him he had been in the process of registering the prisoners when Mladic himself showed up and told him to stop.

When this topic came up during the cross-examination, Judge Orie once again intervened and asked what the basis was for keeping civilians in detention.

The witness said that “civilians should not be prisoners of war” but that he was just conveying what he heard Malinic say – that there were both POWs and civilians among the group detained at the stadium.

Judge Orie asked whether Keserovic asked Malinic what the reason was for capturing civilians, to which the witness replied, “Malinic could not have known who was a combatant and who was a civilian. He probably knew in that group there were some civilians as well.”

“Did you report that civilians were in detention?” Orie asked.

“When I returned to the main staff, I conveyed that in Nova Kasaba at the stadium, about 2,500 people [were] gathered there and among them were probably civilians, too,” the witness said, noting that he did so verbally and not in writing.

“The main staff was aware that civilians were captured and detained?” the judge asked.

“On the basis of this report of mine… the extent to which they understood that this included civilians I am not sure. I don’t know if I highlighted civilians. I said 2,500 from Srebrenica were kept at the stadium,” Keserovic said.

Judge Orie asked the witness to explain the “shift” in his explanation, since he had earlier said he had told the main staff that he had heard both combatants and civilians were being held in the stadium. “Now you say you might not have emphasised there were civilians,” the judge said.

“Well, I would like to say that probably I did not highlight that – that civilians had been taken prisoner,” the witness said. “Rather, when I put all of this together, when I said people who had been taken prisoner… it’s not that I singled out civilians in particular. Perhaps in the beginning I put it in a clumsy way. I stand by what I was said, that 2,500 persons from Srebrenica were in Nova Kasaba.

“Another thing I’d like to say, a lot of knowledge I’ve accumulated, it’s very hard for me to distinguish [what] I knew at that point in time.”