Substantial arms purchases mostly made in other ex-Soviet states.

Substantial arms purchases mostly made in other ex-Soviet states. 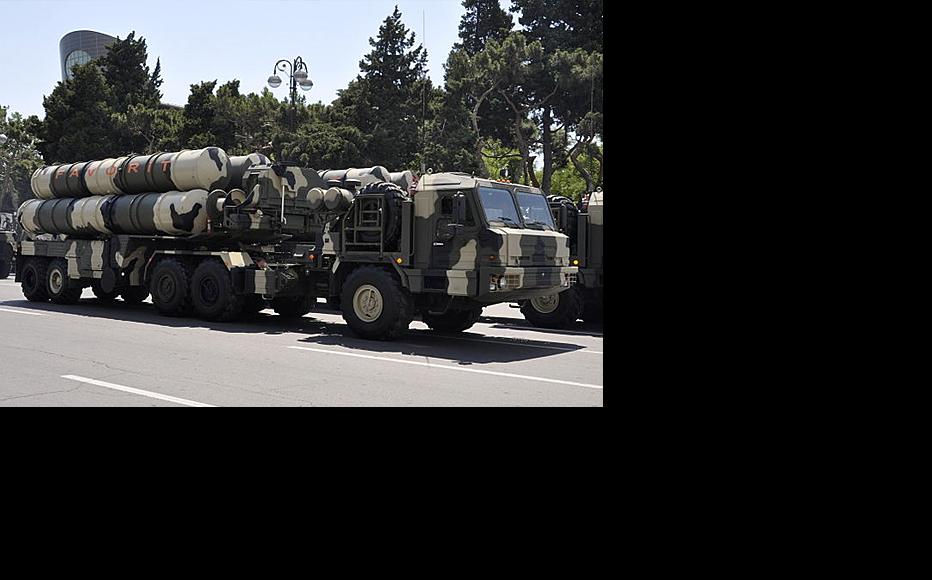 Russian-made missiles on parade in Baku, June 2011. (Photo: Sevda Babayeva/Wikimedia Commons)
The link has been copied

The United States’ decision not to sell arms to Azerbaijan for fear they could be used against Armenia will do little to curb the country’s growing defence-sector acquisitions, experts say.

The US Department of State wanted to add Azerbaijan to the list of countries eligible to buy American military equipment, specifically for border protection and “police-type” activities. But it shelved the plan on June 27, after Congressman Howard Berman wrote to Secretary of State Hillary Clinton to argue that “this equipment could be used to identify and possibly target Armenians in the border area for surveillance or for attack”.

In the years since independence in 1991, Baku has developed a warm relationship with Washington, with American oil firms coming in as investors and Azerbaijan building closer ties with NATO, for example by assisting the effort to supply forces in Afghanistan.

With substantial revenues coming in from oil exports, Azerbaijan has been able to afford exponential rates of defence spending, going from 160 million US dollars in 2003 to a projected 3.6 billion dollars this year. Foreign purchases include combat aircraft and helicopters, artillery, and air-defence systems.

The Stockholm International Peace Research Institute, SIPRI, says Azerbaijan showed the largest rise in military spending of any world state last year – an increase of 88 per cent in real terms in the previous year.

The military build-up has alarmed neighbouring Armenia, which fears that a rearmed Azerbaijan might launch an offensive to recapture Nagorny Karabakh, which has been controlled by a local Armenian administration since 1994, when a ceasefire ended years of conflict.

Protracted negotiations led by the Organisation for Security and Cooperation have not come up with a solution to Karabakh’s future status that all sides can accept, and the truce is frequently marred by localised shooting and skirmishes.

The US arms export ban is unlikely to interrupt the flow of Azerbaijani arms purchases.

Reports by the United Nations Office for Disarmament Affairs, UNODA, and SIPRI’s databases for 2006-11 show that Azerbaijan bought armoured vehicles from Turkey and South Africa, and drone planes from Israel. (See Karabakh Claims Coup With Drone Plane Hit  in this connection.) These sources indicated that engines for the South African vehicles were acquired from the United States, but nothing else.

The State Department website confirms this, indicating that the US helped upgrade the Azerbaijani navy’s navigation, communications, and radar systems.

An examination of the budgets for US government assistance indicates that Washington provided Azerbaijan with 142 million dollars in aid to promote peace and security in 2002-11. The main aims of this assistance were to enhance Azerbaijan’s counter-terrorism capacity, help it prevent the proliferation of weapons of mass destruction in the Caspian region, and as part of this, to improve border controls and thus block illegal shipments.

There are even some arms sales in the other direction. In 2010, Defence Industry Minister Yaver Jamalov told local media that his ministry had signed three deals under which American firms would buy Russian-pattern machine guns and mortars, and ammunition for both weapon types as well as for Kalashnikovs.

Yashar Jafarli, a defence expert who heads the Azerbaijan Public Association for Security and Defence, says the US does not feature in major arms purchases.

“Azerbaijan mostly does arm deals with Commonwealth of Independent States members like Russia and Ukraine,” explained.

One reason for this is that Azerbaijan continues to use Soviet-pattern military equipment, so it makes sense to continue buying new items and spare parts from Russia and other suppliers that manufacture to the same sets of standards.

UNODA reports that over the last decade, Azerbaijan has acquired 170 T-72 tanks, 150 armoured personnel carriers, over 320 large-calibre artillery pieces, 95 missile systems, and 19,000 Kalashnikov rifles from Russia, Ukraine and Belarus. It has also acquired Russian-made Uran missiles, which are for naval use and are therefore destined for deployment on the Caspian Sea.

Sumerinli said talk of Azerbaijan deploying its military might against its Armenian neighbours was unfounded. The government had signed agreement formally committing it to a peaceful resolution of the Karabakh dispute.

Azerbaijan’s defence ministry refused to comment on the US decision, and on military cooperation with Washington in general.

A spokesman for the foreign ministry, Elman Abdullayev, said the country’s arms purchases were designed for defence rather than offence.

“That is absolutely justifiable given that Azerbaijani territory [Karabakh and adjoining areas] is occupied by Armenia. This country does not intend to use its weapons against other countries,” he said, without specifying whether Armenia was one of those countries.

Despite the recent decision, neither Sumerinli and Jafarli believes Washington is wholeheartedly committed to banning sales of military equipment to Baku.

“The US will think of some ways of assisting Azerbaijan, which is an extremely important country for it,” Sumerinli said. “It might sell military items to Azerbaijan via Israel or Turkey, with which Azerbaijan has strong collaborative ties.”

Shahla Sultanova is a freelance reporter in Azerbaijan.