Each side blames the other for spate of cross-border shooting incidents.

Each side blames the other for spate of cross-border shooting incidents. 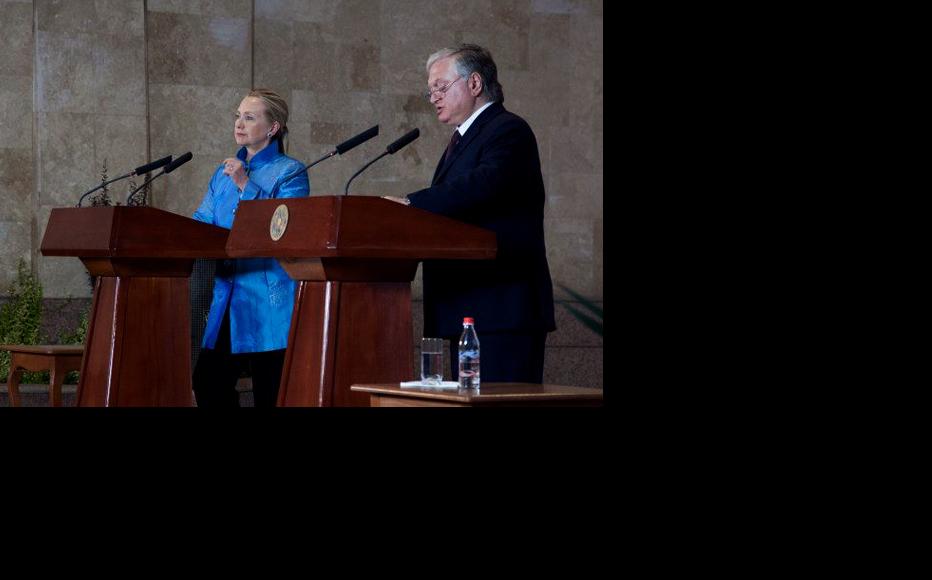 US Secretary of State Hillary Clinton and Armenian foreign minister Eduard Nalbandyan at a press conference in Yerevan. (Photo: US embassy in Yerevan)
The link has been copied

Clashes along the front lines separating Armenian and Azerbaijani forces last week resulted in deaths on both sides, but that does not mean the Nagorny Karabakh conflict is in danger of reigniting after a two-decade-long truce, experts say.

As is often the case, accounts of the shootings from June 4 to 7 – and of who was to blame – differed sharply on both sides. The Armenians said the Azerbaijani military suffered 25 dead and killed four of their soldiers. Azerbaijan said Armenian troops killed five of its men at a cost of 40 of theirs.

The end of full-scale hostilities in 1994 left an Armenian administration in control of Nagorny Karabakh and adjoining regions, but without international recognition. The ceasefire agreement has held over the years, despite sporadic gunfire both across the “line of control” that rings Karabakh, and along the border between Armenia and Azerbaijan. Years of negotiations have not produced a formal peace agreement.

Officials in Yerevan said the violence started on June 4 with an Azerbaijani incursion into Armenia’s Tavush region, which left three Armenian soldiers dead. A fourth was killed overnight on June 5-6 on the front line around Karabakh.

Azerbaijan’s defence ministry described one clash on June 5 as an Armenian attack on its forces’ positions in the Qazakh region, which was repulsed. Apparently referring to the same incident, Armenian sources said Azerbaijani troops made an incursion into Tavush region – which borders on Qazakh – and lost five men in the process without causing any fatalities.

The one point on which Armenian and Azerbaijani commentators agree is that this spate of skirmishes was connected with a visit to the region by United States Secretary of State Hillary Clinton that took place at the same time – June 4-7. Each side accused the other of deliberately provoking an outbreak of violence timed to coincide with the Secretary of State’s arrival.

“I think it’s no coincidence that these aggressive actions occurred during Hillary Clinton’s visit,” David Jamalyan, a defence expert in Armenia, said. “Azerbaijan wanted to check to see what the reaction from the United States and other world powers would be.”

“Not satisfied with violating the ceasefire regime in the Nagorny Karabakh conflict zone on a daily basis, Baku is trying to raise tensions on the border with Armenia,” he said.

In Azerbaijan, reserve lieutenant-colonel Oqtay Kerimov said it was Armenia that was responsible, and suggested that it was planned long in advance as a tactic for focusing US attention on Karabakh.

At the same time, Kerimov blamed the general recurrence of ceasefire violations on an Armenian policy of bolstering military positions, for example by gaining control of hilltop vantage points and buildings near the conflict lines.

Sergei Minasyan, head of political studies at the Caucasus Institute in Yerevan, said tensions – caused by Azerbaijan – had reached unprecedented levels, and it was not clear which way things were heading.

“Azerbaijan has not been so active on the border for a long time,” he said.

In Yerevan, Clinton stressed that the Karabakh conflict must be resolved via the ongoing peace process.

“I am very concerned by these incidents and have called on all parties, all actors, to refrain from the use or threat of force, because there is no military solution to this conflict,” she said. “It can only be resolved at the negotiating table. And of course there is a danger that it could escalate into a much broader conflict that would be very tragic for everyone concerned.”

“I am deeply concerned about the danger of escalating tension, which could have unpredictable and disastrous consequences. This cycle of violence and retaliation must end, and everyone should work to keep the peace and comply with the obligations under the 1994 ceasefire agreement,” she said. “I have asked the president, as I have asked the president of Armenia, to work together to exercise restraint and to take the steps necessary for peace, not conflict.”

“This most recent act of sabotage by Armenia is an example of the unconstructive position which that country has taken for a number of years,” he said. “Armenia is trying to maintain the status quo. Instead of taking steps towards peace, stability and security, it is increasing militaristic rhetoric, instability and provocations. That shows Armenia is not interested in achieving peace.”

Ilgar Mammadov, chairman of the Republican Alternative Movement, argued that Clinton’s comments supported the Azerbaijani position – if peaceful negotiation was the only route for resolving the Karabakh, Armenian control of Karabakh could not be legitimate.

“Clinton’s remarks don’t mean that at one point, there was a military solution to the conflict, and that Armenia achieved it. If there is no military solution, that means there never was and never will be one,” he said, noting that this logic meant that “Armenia must withdraw its armed forces from the occupied territories.”

Despite the violence on the ground and the political recriminations, analysts in Yerevan are not predicting that things will really get out of hand.

“This sabotage [of the ceasefire] is more or less constant,” Artsrun Hovhannisyan of Armenia’s Institute for Political Studies said. “It isn’t worth deliberating whether such incidents genuinely make it more or less likely that the ceasefire will break down.”

Jasur Sumerinli is editor-in-chief of the MilAz defence news agency in Azerbaijan. Naira Melkumyan is a freelance journalist in Armenia.