Demonstrators are driven by complex motives and differing agendas, but this is not a repeat of the Kiev revolution.

Demonstrators are driven by complex motives and differing agendas, but this is not a repeat of the Kiev revolution. 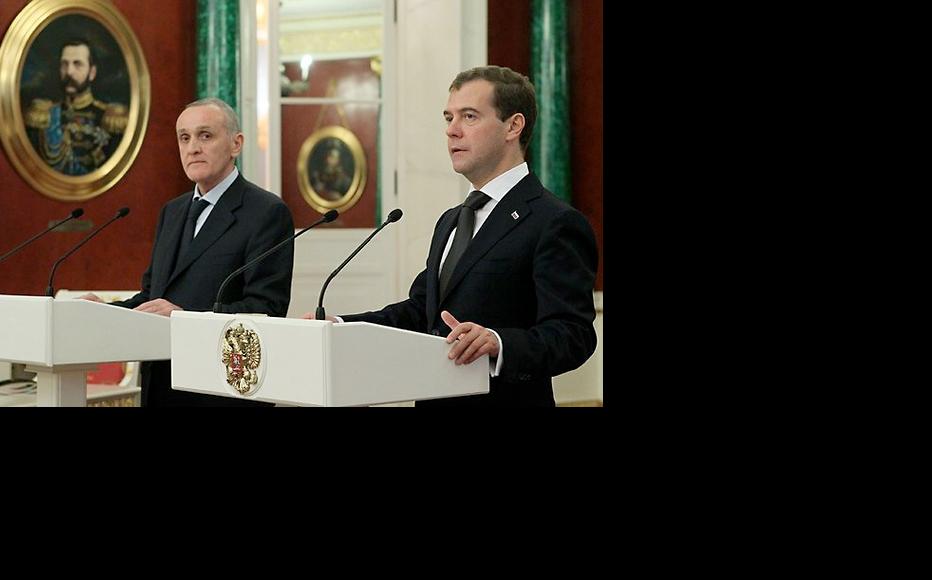 Abkhazian president Alexander Ankvab (left) with Russian prime minister Dmitry Medvedev, who was president when this photo was taken in 2011. (Photo: Russian Presidential Press and Information Office)
The link has been copied

What do the protesters say they want to achieve?

Their main goal is to make the president, Alexander Ankvab, resign. They say he’s reneged on his 2011 election promises to pursue effective social, economic and political reforms and to fight corruption.

There have been two rounds of talks in recent days. Vladislav Surkov, a special envoy from the Russian president spent a day in Abkhazia trying to make the opposition and the president return to negotiations.

The failure of this diplomatic effort led to the opposition deciding on May 29 to form a council that will take charge of the situation. The opposition says Ankvab has no authority at the moment.

Is this protest movement a unified, well-led force?

The movement is led by a group of former officials and local prominent people who formed a “Coordination Council” last summer.

These are people with different political and personal agendas. So far, there is no published document detailing a common vision of what Abkhazia would look like if they took power.

Some of the opposition leaders have not only political disagreements but also personal differences with Ankvab and are now looking for revenge – they have lost jobs or businesses because of his actions and decisions.

What is likely to happen in the next few days?

The opposition does not seem to be fully in control of its supporters rallying in the streets. There have already been several cases when some activists, for example, tried to attack local journalists, and these actions were not coordinated with opposition leaders.

It is important to note that most Abkhaz families have guns at home. If someone starts shooting, this may led to wider bloodshed.

The same time, it is not clear whether the president is able to fully control his government and his supporters. There have been reports that he was asked to remain inside a Russian military base for his own safety, while the rest of his government stays in the capital Sukhumi.

The government has declared several times that it will not to use force against the protesters. But if the crisis deepens or – in the worst-case scenario – skirmishes break out, no one really knows whether the security and defence ministers will be ready to follow Ankvab’s instructions.

Is this uprising influenced by the one in Ukraine earlier this year?

The Abkhaz crisis really has nothing to do with events in Ukraine. Politicians of all stripes in Abkhazia have actually been supportive of Russia’s actions in Crimea and have criticised the new Ukrainian government.

The crisis in Abkhazia has been building since last summer. There were several attempts by the opposition to hold street rallies, all of which produced some small political compromises with the president.

No one really expected that this week’s rally would be any different. Several hundred people approached the presidential palace, asking Ankvab to come out and speak to them – a long-standing tradition in Abkhaz society, and one that he used to respect.

On May 27, Ankvab’s refusal to talk heated up emotions. Protesters rushed into the building while the president was holding talks with opposition leaders. His decision to leave the presidential residence helped his opponents gain more authority.

What is Moscow’s role in Abkhazia?

Russia is Abkhazia’s closest ally and guarantor of its security. Moscow was the first state, and to date the only major one, to recognise Abkhazia as independent in August 2008. Most countries still regard it as part of Georgia.

Since then, the de facto republic has been receiving money from Russia to pay salaries and cover other local budgetary expenditure. Moscow has also funded road rebuilding and other infrastructure projects.

The majority of the Abkhaz population hold Russian passports in addition to their own.

All political forces in Abkhazia are supportive of Russia. After the annexation of Crimea, there was speculation in Moscow that Abkhazia might be asked to follow suit and join Russia. At that point, local politicians including the opposition released a joint statement declaring that Abkhazia wanted to maintain its independence.

There have been several irritants in relations with Moscow, for instance the issue of returning property owned by ethnic Russians who lived there before the war of the early 1990s, and talk of Russian investors being allowed to privatise land in Abkhazia.

Ankvab succeeded in starting a smooth process of resolving these matters with Moscow, but was criticised by some of the opposition for acting against the state’s interests.

If Moscow is so powerful, why have its diplomats been unable to impose a solution?

Although Russia is of great importance to Abkhazia, it has been invisible in local politics for the last ten years. That dates from 2004, when President Vladimir Putin openly supported one presidential candidate, which led to a big political crisis in Abkhazia and nearly ended in bloodshed. Since then, Russian officials have preferred to stand aside from Abkhazia’s turbulent politics.

Abkhazia has its own political culture which some analysts call “public democracy”. It is a small place where people know each other and it is difficult to hide anything of significance. This might seem a bit basic to outsiders, but it has worked over the last 20 years since Abkhazia came out of the war with Georgia.

There are now crowds of people in the streets of Sukhumi. They have already started seeing themselves as the winners. Just one example – the crowd hissed off one opposition leader who dared to say that President Ankvab might retain his post while his opponents would take the government.

It looks like an impossible mission for anyone, even Russia, to dictate terms to them and persuade them that political compromise is in the interest of all sides.

Depending on who wins, does Russia stand to gain or lose?

Russia will win in any case, as long as there is no bloodshed.

Even if there is a political compromise where Ankvab keeps his job and the opposition takes the ministries, government will be weaker. It will be much more difficult for future authorities to resist possible Russian pressure, if they are not united and have no common goals or vision of how to develop Abkhazia.

If there is bloodshed, it will be difficult for Russia not to intervene, if only to secure its military bases and soldiers in Abkhazia.

Apart from Russia, most of the rest of the world still regards Abkhazia as part of Georgia, and no real progress has been made towards a peace settlement. Could there be a new government in Sukhumi that Georgia would find it easier to work with?

After the change of government in Georgia in 2012 Tbilisi started developing direct contacts with President Ankvab. They succeeded in defusing a number of incidents and resolving some humanitarian issues.

All these contacts were kept secret, and are all but invisible to the general public. If there is political change in Abkhazia, the Georgian government will need some time to build contact with the new leaders.

But no change of government will lead to dramatic changes in the dispute with Tbilisi. All local politicians, including the opposition, demand that Georgia recognise Abkhazia as an independent state. And that looks extremely unlikely.

Official talks taking place in Geneva, attended by Russia, Georgia, Abkhaz and South Ossetian representatives and mediated by the European Union, the United States and the United Nations, are frozen. There is little chance of a resolution in the near future, barring some dramatic geopolitical change in the region.

Why are the protesters angry about Ankvab’s offer of Abkhazian passports to ethnic Georgians?

The passports dispute is a real issue for many Abkhaz, and has afforded the opposition a great way of winning public support.

The opposition accuses Ankvab of allowing Abkhaz passports to be issued to tens of thousands of Georgians living in the southern districts. Matters came to a head with a parliamentary debate which decided that everyone in Abkhazia should get new passports starting from next year. More stringent rules will apply, requiring people to declare any other citizenship, and renounce it if it is Georgian. The Georgians cannot easily do without Abkhaz passports as they need them to cross the administrative boundary with Georgia.

When the parliamentary investigation was going on, some opposition leaders took a nationalist stand, accusing Ankvab of selling out the Abkhaz people to get more potential voters on the books, while others took a legalistic view, calling for penalties for the president and other top officials who had sanctioned unlawful passport distribution.

Given the current turmoil, it is far from clear how the passport controversy will play out for the Georgians living in Abkhazia.

Olesya Vartanyan is a reporter for RFE/RL’s Russian-language programme Ekho Kavkaza. She has spent the last month with IWPR in London on a fellowship awarded by the European Union Monitoring Mission in Georgia, as winner of the Special Prize for Peace Journalism.