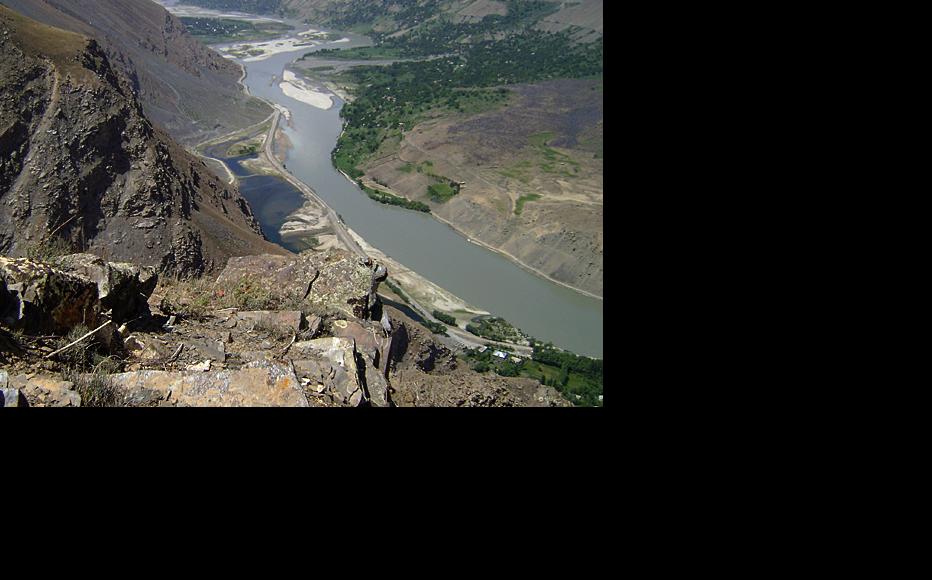 A road out of Khorog skirts the river Pyanj. Afghanistan is on the other side of the river. (Photo: Shahodat Saibnazarova)
The link has been copied

In a joint statement issued on July 24, the interior ministry and national security committee said 12 of the dead belonged to the Tajik security forces and the rest were members of a rebel armed group targeted in a major military operation.

On July 25, the Tajik military and police held talks with Ayombekov’s group and agreed a ceasefire. This held through the day  – gunfire was no longer heard in the main provincial town, Khorog. It appeared the Tajik government military had fallen short of achieving its objective of crushing the rebel forces. (See Halt to Fighting in Tajikistan's East, No Clear Outcome.)

This outbreak of violence – highly unusual for this sparsely-populated, high-altitude region of Tajikistan – began on July when the provincial head of the national security service, Major-General Abdullo Nazarov, was killed in an attack outside Khorog.

The authorities identified one Tolib Ayombekov as a possible suspect. Like the murdered man, Ayombekov was a member of the regular security forces, in his case as commander of a border guards unit at Ishkashim, close to the Afghan frontier.

According to the official account of events, the authorities sent a team to negotiate with Ayombekov and urge him to hand over the alleged killers among his men. After three days of talking, it was clear this was not going to happen.

“Ayombekov categorically refused this demand and instead he mobilised armed criminals,” an official statement said.

The authorities then sent in the military, resulting in street battles in Khorog. Although casualties were high, the government said no civilians were killed.

A state of emergency was declared in Badakhshan, the few roads in and out were blocked, flights between Khorog and the capital Dushanbe were suspended, and mobile phone and internet access was cut.

Ayombekov is a former rebel leader turned security forces member. Like many opposition commanders who fought the government during the 1992-97 civil war, he was given his command in the border guards force as part of the peace and reintegration agreement that ended the conflict.

In that job, officials are now alleging, he set up a crime ring that ran cross-border smuggling of narcotics, tobacco and precious stones.

Unlike other former rebel strongholds, Badakhshan has been less of a worry for central government over the years. In eastern valleys nearer to Dushanbe, there have been sporadic incidents since the civil war, which though localised, raised concerns of a Sunni Islamic insurgency with possible links to the Taleban or al-Qaeda in Afghanistan. (See  Tajikistan: Islamic Militancy No Phantom Menace and Tajik Authorities Struggle to Quell Militants.) People in Badakhshan are mostly Ismaili Muslims, so that kind of link is of little direct concern.

Some experts argue that Badakhstan’s remote location and apparent stability meant that officials in Dushanbe did not keep such a close eye on things.

According to the editor of the Asia Plus newspaper, Marat Mamadshoev, Badakhshan was the last region where the authorities have taken on the former insurgent commanders.

“Operations like this one tackling civil war-era warlords have taken place virtually everywhere in Tajikistan – in the Rasht valley, in Soghd and in Kulob,” he said, naming regions in the east, north and south of the country. “The majority of the [major] civil war participants have either been killed or imprisoned.”

Left to their own devices, some of the ex-field commanders have built up a strong presence in Badakhshan, perhaps leaving them with the impression that they could defy the central authorities. In an incident four years ago, a group led by one Muhammadbokir Muhammadbokirov attacked the provincial offices of the interior ministry.

The names of several former guerrilla leaders come up in connection with allegations of organised crime, above all the highly lucrative trade in heroin from Afghanistan. The border is porous due to the difficult terrain and lack of adequate patrols.

The ongoing military operation in Badakhshan is likely to shake the powerbase of former warlords whose influence seems to have grown over the last ten years or so.

Ayombekov, who has not been killed or captured, reportedly sent a letter to President Rahmon, perhaps in the hope he would step in as a kind of arbiter. It clearly did not work. The major-general’s murder was a direct challenge to central government, and the response was a show of force.

Political analyst Nurali Davlatov argues that the government should carefully weigh the consequences that excessively heavy-handed action could have in this distinctive part of Tajikistan. The Pamiri people of Badakshan differ from the rest of the country in language, culture and Islamic practice, and feel underrepresented in central government institutions.

“The use of force could strengthen separatism,” Davlatov said. “There are differences of ethnic background and religion and – whatever others might think – the Pamiris believe their rights are infringed on.

“If the government is able to draw a distinction between the ordinary people and the warlords, then an escalation can be averted.”

Davlatov warned that if former field commanders were cornered but not defeated, they might look for support from armed groups over the border in Afghanistan, where he believes they already have connections. That would lead to an expansion in the conflict that Tajikistan’s military would be hard-pressed to cope with, he added.

Any failure to resolve the current situation is likely to place the government under considerable international scrutiny, Davlatov said. As a key Ismaili region, Badakhshan has benefited from development aid from the Agha Khan Foundation – but so have other, non-Ismaili parts of the country.