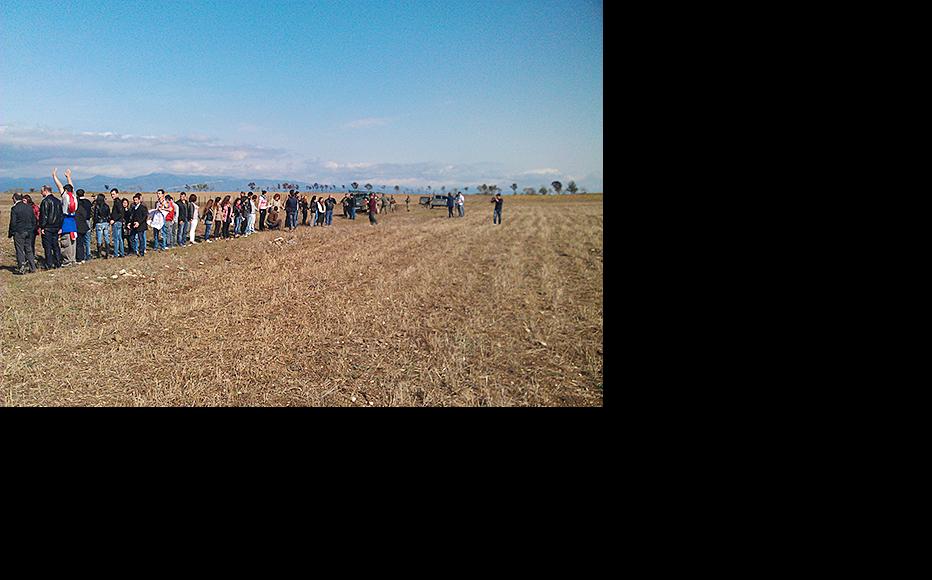 Georgian NGO activists stage a protest against a new fence put up in in the village of Dvani to mark territory claimed by South Ossetia. Picture taken October 1, 2013. (Photo: Goga Aptsiauri)
The link has been copied

Georgian officials are trying to rally international support to halt what they say is a creeping expansion of South Ossetian-held territory.

To add insult to injury, the barbed-wire fencing that marks out new areas claimed by South Ossetia is being laid out by troops from Russia stationed there since the war of August 2008.

After that brief conflict, Moscow recognised South Ossetia and another breakaway territory, Abkhazia, as sovereign states. Tbilisi and most of the international community reject that, and hold that both entities still fall within Georgia’s national borders.

President Mikheil Saakashvili raised the issue when he addressed the United Nations General Assembly on September 25.

“The annexation of Georgian lands by Russian troops continues,” he said. “Despite the friendly statements made by the new Georgian government in recent weeks and months, the Russian military keeps advancing its positions, dividing communities with new barbed wire and threatening our economy.”

Russian deputy foreign minister Grigory Karasin said the authorities in South Ossetia were merely marking out its true territorial boundaries, using maps from the Soviet era when it counted as an “autonomous region” within Georgia.

The Georgians say the lines of barbed wire now extend far beyond South Ossetia by anyone’s reckoning, and create an arbitrary and impassable divide that deprives people of their farmland.

As Saakashvili was speaking in New York, residents of the village of Dvani were moving out, demolishing their own homes and trying to shift any movable property. They had been told by Zaur Valiev, a representative of the South Ossetian government, that their homes were on the wrong side of the border, which was about to be closed, so they would have to move.

In May this year, Russian troops pushed forward to control previously Georgian-held areas around Dvani and another village, Ditsi. On September 22, they started laying lines of barbed wire.

Dvani resident Givi Makhachashvili said his family had lost all its property since the 2008 war.

“First my house was burnt out, and then Russian troops closed the road to it. Then they gradually shifted the border forward and our fields ended up on the occupied side,” he said. “Now they say the barbed wire is to go on this side of my son’s house, and we’ve been given just a few days to remove it. How can I take it down – how can they ask me to demolish a house built with such hard work?”

Neighbours are helping the Makhachashvilis take away material from the demolished house. They regularly stop to answer questions from local and foreign journalists and human rights activists.

“What can I say?” one resident said when he was asked how he felt about the shifting boundary. “They’re now dividing the village in half. If they want, they can come back tomorrow and take it all. Who’s going to stop them?”

The Georgian foreign ministry condemned the expulsions and appealed to international institutions to step in.

“This is a gross violation of the basic principles of international law and of the obligations assumed under the ceasefire agreement of August 12, 2008,” the statement said. “The foreign ministry appeals to our partner countries and to international organisations to take effective and appropriate steps to end the illegal activities of the Russian occupying power.”

The United States ambassador in Tbilisi, Richard Norland, paid a visit to Dvani and said it was tragic that local people should be deprived of access to their homes. On September 20, the embassy released a statement expressing concern about the demarcation process.

“The increased pace of these activities near villages like Ditsi and Khurvaleti further separates families and neighbours, and has a profound negative impact on the lives and livelihoods of populations on both sides of the barbed wire, cutting off local communities from their farm land, keeping children from attending school, and blocking access to cemeteries,” it said. “We continue to call for these barriers to be removed … We welcome the Georgian government’s continued, peaceful approach to the resolution of these conflicts, and encourage all sides to engage in meaningful dialogue to resolve this situation.”

The steady advance of Russian and South Ossetian forces has raised fears that they will take over land through which the Baku-Supsa oil pipeline runs. The pipeline, operated by BP, carries Azerbaijani oil to the port of Supsa on Georgia’s Black Sea coast, and the transit fees are an important revenue source for Tbilisi.

Saakashvili highlighted the risks in his United Nations address.

“The Russian military keeps… moving towards the vital Baku-Supsa pipeline, approaching ever closer to this important route and thus placing in question the very sustainability of our country,” he said.

The government of Prime Minister Bidzina Ivanishvili, which has not been on good terms with Saakashvili since it was elected in October 2012, adopted a more guarded line.

“They only have to move forward another kilometre for part of the pipeline to be under their control. I think it would be a maximum of 1,000 metres of pipeline,” Deputy Energy Minister Ilia Eloshvili said. “In theory, that shouldn’t create any problems for the Baku-Supsa operation since it is an underground pipeline.”

Recalling that the same thing happened during the brief conflict of August 2008, Eloshvili said that “the only issue was that BP’s monitors weren’t able to check that section”.

Elene Khoshtaria of the Association for Reforms, a think-tank in Tbilisi, said the government was being over-complacent, since losing control of a section of the pipeline would amount to a strategic shift in the region’s geopolitics. With the larger Baku-Ceyhan pipeline, Baku-Supsa provides Azerbaijan with westward oil export routes that bypass Russia.

Khoshtaria said the current Georgian administration was so keen to restore relations with Moscow – which were broken off because of the 2008 war – that is was not taking the firm line needed.

Alexi Petriashvili, Georgia’s minister for European integration, replied that the government was being careful not to rise to Russian provocation.

He insisted that the authorities were doing their best to persuade European states to criticise the boundary shift, and that they were making every effort to help the displaced villagers.

In Dvani, Makhachashvili expressed scepticism that assistance would be forthcoming.

“After the war, the six people in our household were given a cottage. Once we’d been given that, they ended all assistance, so we lived off the harvest from our land in Dvani. But now we can’t gather the harvest, we can’t work and we won’t be able to remove the house,” he said.

Natia Kuprashvili is an IWPR-trained journalist and director of the Georgian Association of Regional Broadcasters.