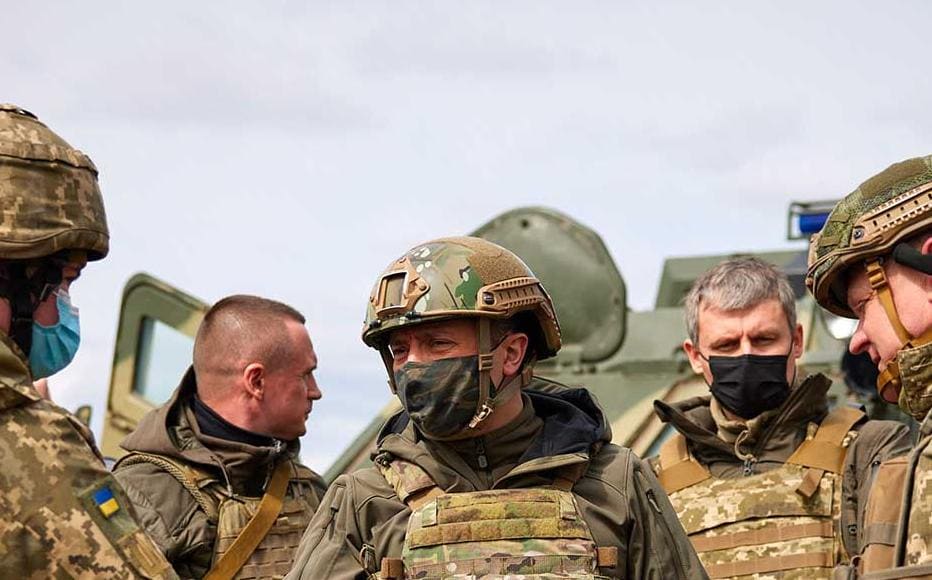 President Volodymyr Zelenskyy visits Ukrainian positions on the front line, 8 April 2021. © The Presidential Office of Ukraine
The link has been copied

For several weeks now, Ukrainians have been debating whether the unprecedented accumulation of Russian troops near the border is preparation for the start of a full-scale war.

"The total number of Russian armed forces and subdivisions of the [Russian Federation]  internal troops concentrated along the state border of Ukraine is about 45,000 people," said Andrey Lysenko, spokesman for the Information Center of the National Security and Defense Council of Ukraine, on April 5.

According to Lysenko, at that time, about 160 Russian tanks, 1,300 armoured combat vehicles, 130 multiple launch rocket systems and 350 artillery systems were located near the border with Ukraine.

Since then, and despite significant diplomatic and media attention, Russian military movements have only continued, at the border and within occupied Crimea.

"The problem is that if the threat of blackmail does not work, then the Russian Federation will have to raise the degree of tension - and so on until a real war develops."

Furthermore, contrary to the 2011 Vienna Document on confidence and security building measures, signed under the auspices of the Organization for Security and Co-operation in Europe, Russia has not provided any detailed explanation about the troop build-up.

Officials in Kyiv and other western capitals have become extremely nervous. Many western leaders have called Kyiv and Moscow, to express their support for Ukraine and to condemn Russia’s military movements respectively.

Incoming US President Joe Biden had refrained from communicating with his Ukrainian counterpart, President Volodymyr Zelenskyy, holding out for decisive action to combat corruption. But the threat of a Russian invasion compelled Biden to change his plans, telephoning April 2 in order to signal US support for Ukraine.  Biden also spoke with Russian President Vladimir Putin on April 13, among several issues voicing concerns over Ukraine.

Underscoring the point, on August 14 and 15, the military destroyer USS Donald Cook and the aircraft carrier USS Theodore Roosevelt entered the Black Sea.

Distinguishing the build-up from previous large-scale military exercises in recent years, Russia has also ramped up its information war.

“The current events have one feature that the previous military manoeuvres of the Russian Federation did not have. This time the military activity is accompanied by an unprecedented level of Russian anti-Ukrainian propaganda, not seen since 2014,” notes Maria Avdeeva, research director at the European Expert Association and a member of the security experts network iSANS.

This propaganda wave only adds to concern that Russia is preparing for hostilities.

Moscow media note that military movements have only taken place on Russian sovereign territory, and that spring is the season for exercises. They argue that Ukraine is also undertaking military exercises, and express concern over Kyiv’s request (rebuffed by NATO) to join the alliance.

But they also dehumanise Ukrainians and blame them for the conflict. And amid this wave of propaganda, Russian officials have spoken openly about the prospect of having to use the army to protect “their citizens”. Two years ago, Russia launched a mass distribution of Russian passports to residents of rebel-held parts of Ukraine in Donbass.

‘The beginning of hostilities would be the beginning of the end of Ukraine,’ said Dmitry Kozak, the Kremlin’s deputy chief of staff and President Vladimir Putin’s Ukraine negotiator. ‘If, as our president says, Srebrenica is established there, we will probably have to defend ourselves.’

The statement, by such a senior figure in the Putin administration, has been widely perceived in Ukraine as a threat of an orchestrated provocation – which Moscow would use to justify a supposedly ‘defensive’ military incursion. In a region that lives on history, it raised shades of a 1939 ‘Finnish scenario’, in which a staged shelling on a Soviet post was used to justify launching an invasion.

Yet is a new war in Ukraine inevitable? Despite all these signals, mostly likely not.

When Russia initiated the conflict in 2014, Moscow tried to disguise its preparation. Now it is not. This may suggest that the Kremlin's real goal is not to launch a new war but rather to increase its negotiating leverage.

Many senior officials in the Ukrainian government hold this assessment. According to one European Ambassador, Kyiv is convinced that Russia’s aim is to blackmail Ukraine to achieve further gains in Donbass. Having lost hope for concessions from Zelenskyy over the area, the Kremlin may try to force him to agree to them on the pretext of a threat of war.

The Kremlin has been extremely irritated by recent moves by the Ukrainian authorities. These range from the imposition of sanctions on Putin's close ally Viktor Medvedchuk, to the launch of the Crimean Platform, a broad-based diplomatic initiative to de-occupy the peninsula, to the refusal to consent to Russian demands within ongoing talks.

A key issue of discord is over the timing of elections in the disputed region. Based on the Minsk agreement of 2014, Kyiv insists – with backing from the West – that any vote in Donbass can only take place after Russian troops withdraw and Ukraine re-establishes control over its border.

Moscow asserts that Kyiv must first introduce provisions in its constitution on the special status of Donbass, then hold elections in the disputed territories – and only then could Russian troops withdraw and transfer control of the border to Ukraine.

Several weeks ago, confidential details of the high-level negotiations on Donbass being overseen by Germany and France were leaked in Russian media. Many analysts concluded that the purpose of the leak was to demonstrate that Russia has lost faith in these so-called Normandy Format talks.

According to Mikhail Gonchar, President of the Centre for Global Studies Strategy XXI in Kyiv, the Russian Federation is trying to give itself a much-needed win it had hoped to achieve last year.

‘In 2020, Russia badly needed a geopolitical victory – it was both the anniversary of the victory in the Great Patriotic War and the referendum on amendments to the constitution,’ Gonchar told IWPR. ‘However, the pandemic has changed the course of events and this year the starting point for escalation is far worse than it was last year. The United States has a new president and Ukraine has preventively imposed sanctions against a pro-Russian fifth column.’

Former US Special Envoy to Ukraine Kurt Volker agrees, suggesting that Russia’s military moves send several messages. First, they divert attention from news about imprisoned opposition leader Alexei Navalny and other domestic issues. They send a deliberately overblown rebuff to the Biden administration, especially after the US president agreed when asked if he thought Putin was a killer. ‘But perhaps most important of all,’ says Volker, ‘is the psychological pressure on Ukraine.’

Nevertheless, war remains very possible, even as a backup option.

‘The problem is that if the threat of blackmail does not work, then the Russian Federation will have to raise the degree of tension - and so on until a real war develops,’ says a European Ambassador who asked to remain anonymous, reflecting on his conversations with Ukrainian leadership.

For a clearer signal of Russian intentions, many diplomats are looking to Putin’s address to the Federal Assembly of Russia, scheduled for April 21. The following day is the opening of the assembly’s upper house, the Federation Council.

This timing echoes the events of 2014, before the annexation of Crimea, when Putin addressed the Federation Council and requested permission to use troops on the territory of Ukraine.

In reality, the Kremlin is probably working on several scenarios.

‘Using KGB terminology, we are now witnessing a phase of probing, where Putin seeks to study the reaction to the threat of invasion both inside Ukraine and from the West,’ says analyst Gonchar. ‘In his message to the Federal Assembly, Putin will sum up the results of this stage. He can say that Ukraine was preparing provocations, but they were prevented. After that, the world will sigh in relief – the danger seeming to have passed. But this could become a deceptive manoeuvre for the transition to a new phase: reconnaissance in force.’

Meantime, the leadership of Donetsk People’s Republic, one of the two self-proclaimed breakaway territories controlled by pro-Russian forces, is requesting aid from Putin – to provide the breakaway republics military assistance, accept them within the Russian Federation or establish diplomatic relations with them.

All of these requests are highly provocative. If Russia supplies military assistance, this could signal an invasion. But this still depends on a number of factors and how events play out. Rather than a direct attack, some kind of provocation, as a casus belli or to destabilise the situation, seems more likely.

Clearly the response of the western countries, and especially the United States, will play a large role in determining which scenario will prevail. In the meantime, Ukraine will continue to watch with rising concern, and debate the prospects of another war with their larger neighbour.

Yuri Panchenko is the editor and co-founder of the Ukrainian internet portal Evropeyskaya Pravda, and a former special correspondent for the Kommersant-Ukraine publishing house.

Giving Voice, Driving Change - from the Borderland to the Steppes, The Infodemic
Ukraine
Conflict, Disinformation
Connect with us