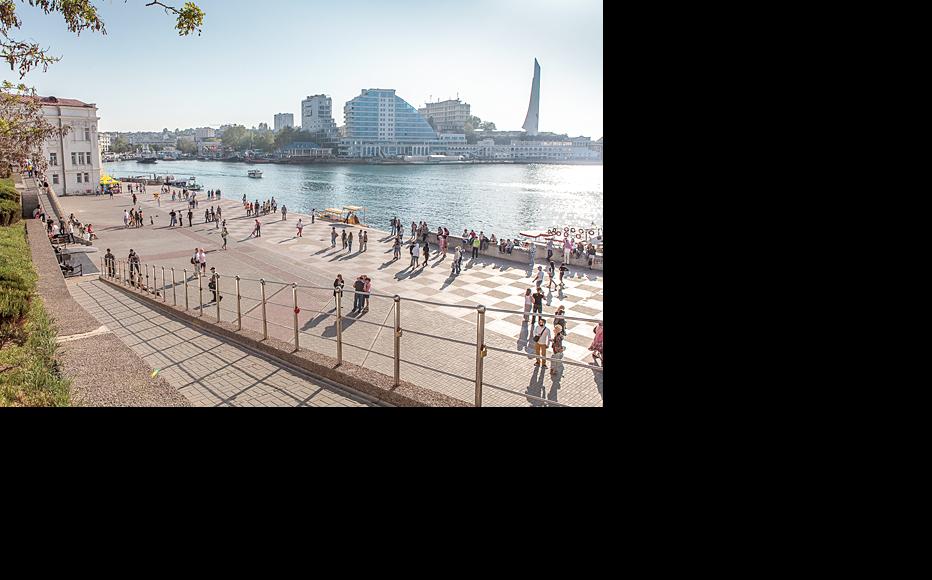 For many Russians, Crimea brings back memories of Soviet-era holidays. Sebastopol, May 2013. (Photo: J 29/Wikimedia Commons)
The link has been copied

As the crisis in Crimea intensifies, IWPR editor Daniella Peled speaks to writer and regional expert Peter Pomeranzev about the directions the conflict might now take.

How do you explain Russia’s attitude to Ukraine?

Vladimir Putin expressed the view of a lot of Russians, even liberals, when he said that Ukraine was not a real country. In Tsarist times, Ukrainian wasn’t even a language of its own, it was called “Little Russian”, and a lot of people still think of Ukraine as “Little Russia”.

Listen to what Putin said [in his March 4 speech]. He was very careful; he kept on stressing that these are our people and we have to protect them from the US, from the Poles, from the Lithuanians. He kept talking about their brotherly relations. To start shooting at Ukrainians would basically amount to civil war.

One of the jokes going around Moscow is that now Germany is trying to stop Russia invading Ukraine – it’s a total reversal of the old paradigm. But having Russian troops there is not quite the same as shooting, and at the moment it doesn’t look like a real war.

The political game-playing is clear both from the West and from Putin. Now it’s about showmanship – like an extension of the Olympic closing ceremony. But it could become a real conflict. These are games which could turn tragic.

What place does Crimea hold in the Russian imagination?

People who say Crimea is the heartland of Russia are quite wrong. The Russians first came there late in the 18th century, and the Russians who live there now mainly after World War II, so they are relatively new.

But no self-respecting middle-class Russian would go to Crimea unless they had an old house there. Those who go there are students, because it’s really cheap, or people who think of it as a retrospective utopia.

It’s not to Russia’s advantage for Crimea to leave Ukraine. There are two million extra votes there for a pro-Russian candidate in Kiev, so Crimea is much more useful as a lever of influence.

The paradox is that it would be much better for Kiev to get rid of Crimea, but no Ukrainian politician could ever say that. You can’t chop off bits of your own country, and there are plenty of Ukrainians in Crimea who would feel abandoned, but it’s essentially a Russian enclave inside Ukraine.

Putin seems keen to have Yulia Tymoshenko in power; they have always had great relations. There may be a big financial movement with oligarchs trying to capture more of the Ukraine economy, which has been happening constantly in the background. Rinat Akhmetov, the richest man in Ukraine, was Yanukovich’s main backer, and if Russia takes away his companies, then their influence in Ukraine will be unlimited.

Putin has a lot of cards to play, some of which are loud and attention-grabbing, others which are more subtle.

How has a rift developed between the United States and Europe over their approach to the crisis?

The US approach has been far tougher than that of Europe.

Moscow’s mission over the last ten years has been to split Europe from Washington and create a Paris-Berlin-Moscow axis. BP is connected to [oil firm] Rosneft; France’s Total to [gas company] Novatek.

This very strategic co-opting of European energy makes a harsh response to Russia very difficult, while the US isn’t dependant on Russia in any way apart from flyover zones to Afghanistan, which aren’t important any more. Putin knows that.

If Russia starts shooting, if tanks start rolling into Kiev, then Europe and NATO will have to respond. But there’s a lot of space before that happens, and Putin knows how far he can push it.

There has been much media discussion of the danger of a new Cold War. Is that an exaggerated fear?

I don’t think Putin thinks in terms of a Cold War. The Russian elites describe themselves as minority shareholders in globalisation, without clear dividing lines between economies. They don’t think in Cold War terms, but in a more sophisticated, clever way.

Does Putin want to build a big wall and hide behind it? He doesn’t. He is not benign, and he wants to make life as horrible as possible for as many non-Russians as possible, but Russia is now a geopolitical player within the global system – and a corporate raider of that world. The Kremlin has gone to huge lengths to crawl inside global institutions.

That doesn’t mean that what’s happening is not very dangerous. It is just dangerous in a different way.