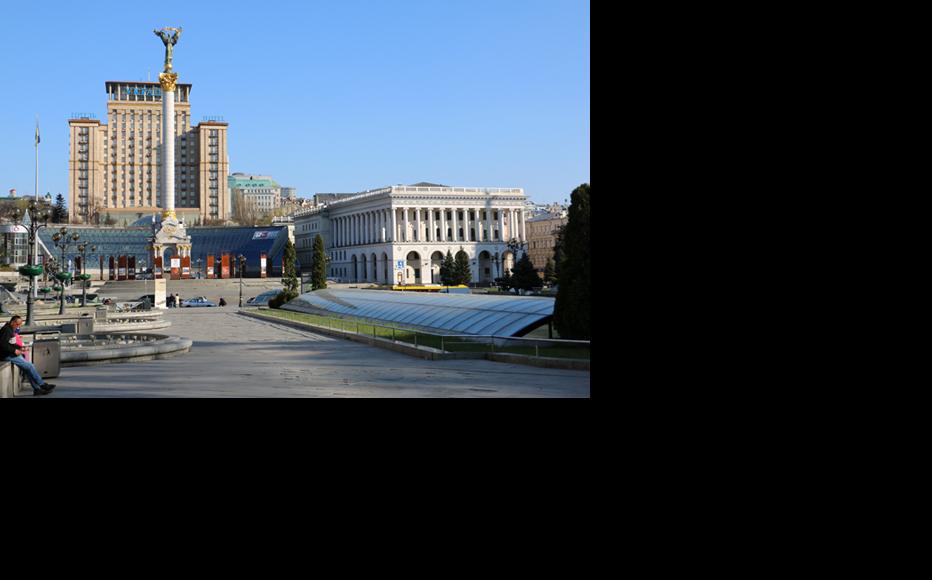 A deserted Independence Square in Kyiv. (Photo: Oleksandr Humeniuk)
The link has been copied

Analysts are warning that the coronavirus pandemic may be particularly damaging for Ukraine’s export-heavy economy, with potential to even change the country’s political direction.

Although Ukraine has had a relatively small number of infections compared to other Western European countries, medical experts expect the peak of the outbreak to come in the second half of April.

Kyiv has ramped up restrictions across the country, rolling out extra measures including the closure of parks and banning gatherings of more than two people at a time. Citizens now have to wear face masks and carry ID whenever they leave their houses.

Ukraine has also completely banned flights from other countries, with the only way to enter by either car or on foot.

As in many other countries around the world, restaurants and other service providers have been shut down, with only food shops, chemists, banks and petrol stations remaining open.

This has had a severe effect on small and medium-sized businesses.

“So far, the quarantine has significantly affected several sectors of the economy, especially those related to the provision of services,” Sergei Fursa, an investment banker, explained. “In general, we expect an economic downturn. If the quarantine lasts for one or two months, the Ukrainian economy may fall by about four per cent and the exchange rate of hryvnia to dollar by 30 per cent. If quarantine in Ukraine and worldwide lasts longer, then the Ukrainian economy may fall by nine per cent this year.”

This comes as a particularly severe blow, given earlier buoyance about the country’s economic direction.

Earlier this year, lawmakers from the Servant of the People party were actively promoting the idea of canceling cooperation with the International Monetary Fund (IMF).

Fursa explained that this was due to earlier economic improvement, adding, “Somewhere in early January, the Ukrainian political elites had such an illusion, dizzy with success, that they would be able to get along without the IMF. Then, the overall situation in the global economy was good but now it is impossible.”

Another issue was that, in order to receive the next tranche of IMF support, Ukraine needed to pass a law making it impossible to return the state-owned Privatbank to its former owner, businessman Igor Kolomoisky. It was Kolomoisky who tried to push the idea of refusing to cooperate with the IMF via lawmakers under his influence.

The law to make it impossible to return Privatbank to Kolomoysky has now passed its first hearing, and is also likely to pass its second, because the high risk of defaulting in the current circumstances.

Vitaliy Shabunin, of the Anti-Corruption Action Centre, said that the economic impact could also impact on the Ukrainian authorities’ political decisions.

“Even before the epidemic, the foreign policy sector of the government had somehow changed,” he said. “In the autumn, it was clearly pro-Western. Things started to change following the replacement of the head of the president’s office. But this epidemic made everything very black and white. We either stick to a pro-Western vector and receive financial assistance or choose the interests of Kolomoisky and deal with a global crisis that we cannot survive without IMF money,” Shabunin concluded.

Covid-19 has also had a significant impact on Ukraine’s media. While the virus and the accompanying quarantine has greatly increased the demand for information, it has also had a potentially disastrous effect on media sustainability.

“Ukrainians are staying at home and accordingly, the level of media consumption has increased.  We can see that people seek more news, especially news from TV channels,” said Galina Petrenko, director of the Detector Media NGO.

The restrictions have changed the way most TV companies function.

“It is a difficult time for them,” Petrenko said. “Big TV stations have canceled entertainment shows, as because of the ban they cannot gather a lot of people in the studios.”

Despite the increased demand for information, media outlets are losing income because their usual sponsors and advertisers can no longer afford to do so.

“We see that advertisers are leaving the media,” Petrenko continued. “The advertisement budget has been frozen in almost all types of media; in some outlets the situation is critical. This means that some media outlets will just disappear. The shortage varies in different media companies. On national channels it is about 25-30 per cent, on regional television channels it is around 60 per cent, and in some small online publications the loss is about 90 per cent of the total budget.”