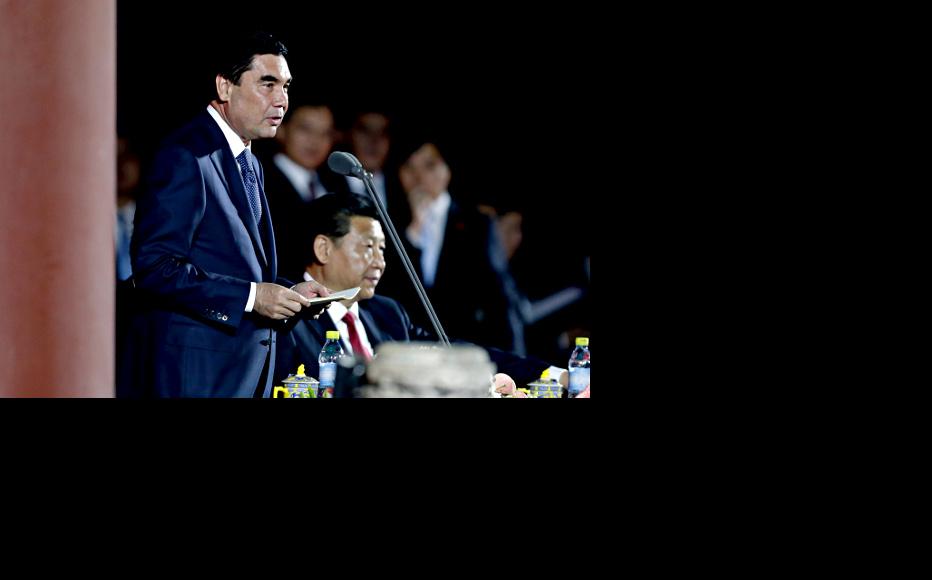 Turkmen president Gurbanguly Berdymuhamedov (left) next to Chinese leader Xi Jinping on a May 2014 visit to Beijing. (Photo: Jason Lee-Pool/copyright Getty Images)
The link has been copied

Constitutional reforms launched by the Turkmen authorities are a pretence designed to show the government is responsive to Western demands on human rights, and are not a genuine attempt to promote democratic freedoms.

The state media in Turkmenistan is full of reports of public debates taking place up and down the country, as citizens actively engage in discussing proposals set out by President Gurbanguly Berdymuhammedov.

The authorities have gone to considerable lengths to show they are serious about giving ordinary people a say. Numerous articles detail the work of a commission charged with soliciting comments from the public for inclusion in the amendments.

According to President Berdymuhammedov, the constitution needs to be altered to reflect changes since the last round of reforms instituted in 2008, the year after he came to power.

In September, the authorities took another step towards their professed goal of building a multi-party system.

After Berdymuhammedov succeeded Saparmurad Niazov on the latter’s death, he made moves to change the political system, but to very limited effect.

He did dissolve the Khalq Maslakhati (People’s Council), an assembly whose 2,500 members used to gather occasionally to rubber-stamp Niazov’s decisions. In 2008 its functions were handed over to the president and the Mejlis or standing parliament, whose numbers were increased.

In January 2012, a law was passed allowing new political parties to be set up, but that only resulted in a second state-sanctioned group, the Industrialists’ and Entrepreneurs’ Party, joining the existing Democratic Party.

In Turkmenistan, the real problem is not that the lack of democratic rights in the constitution, but the total absence of political will to make them a reality.

By simply declaring his democratic declarations, Berdymuhammedov succeeded in distancing himself somewhat from his predecessor. But statements alone do not amount to an intention to move towards greater democracy.

There is a long list of apparent initiatives which look good on paper only. The 2012 law on political parties is a case in point. Since there is no political pluralism and no space for an opposition to exist, having two parties rather than one is meaningless.

Media legislation passed last year prohibits censorship, but it continues to be the norm.

This May, Berdumuhammedov signed off on a law that reaffirms the constitutional right to freedom of association. Since then, not one non-government organisation has been granted registration.

As before, the government exercises total control over the population, represses anyone expressing the slightest criticism, and makes it impossible for genuine civil society to exist.
Only one conclusion can be drawn from all these ostensible democracy-building efforts. None of them will mean a thing until such time as civil society groups are allowed to register and the government stops blacklisting people for working on human rights or just for being related to someone deemed an opponent.

There is also the question of political prisoners in Turkmenistan. One group of them, jailed in 2002 after being accused of plotting a coup against Niazov, have effectively disappeared. No one knows whether they are dead or alive.

The list of essential changes goes on ad infinitum.

If previous constitutional amendments are anything to go by, the latest ones could be no more than a mechanism to consolidate power in the president’s hands.

In the mid-1990s, Niazov changed the constitution so that he could be made president for life. The current constitution does not grant the same right to Berdymuhammedov, but over the last seven years we have seen the emergence of a personality cult similar to his predecessor’s.

Books by Berdymuhammedov about his father and grandfather and his study on Turkmen carpets have become part of the school curriculum. There are more and more portraits and statues of the Arkadag (Protector), as he is now known. Nowadays more people than in Niazov’s day are press-ganged into service as “voluntary” crowd members at events designed to show how much Berdymuhammedov is loved by the nation.

It is not unreasonable to assume that along with the new provisions on an ombudsman and stronger local government, the authorities might also be drafting other, less advertised amendments to offer Berdymuhammedov two more terms in office.

Turkmenistan’s human rights record under Berdymuhammedov has been consistently criticised by the international community.

Two years ago, the United Nations Committee for Human Rights reviewed the Turkmen government’s compliance with the International Covenant on Civil and Political Rights, signed in 1997. The committee noted the disparity between the legislative framework and its practical implementation, including in such areas as torture and freedom of assembly and association.

While European Union members and the United States are also critical of the human rights situation in Turkmenistan, this is tempered by their desire to access its vast resources of natural gas.

For their part, Turkmen leaders are keen to sell gas to Western markets and to import modern technology for the hydrocarbons industry. They understand that Western governments will not close their eyes completely to the state of human rights despite their energy interests, but they also realise that Turkmenistan needs to develop alternative markets despite the current supply relationship with China, where no one asks difficult questions about political prisoners.

In my view, this is the main reason why Berdymuhammedov has embarked on a process of cosmetic, image-burnishing reforms. He is well aware that many Western leaders will take his statements at face value without looking too closely at what lies behind them. Recent reports from the Organisation for Security and Cooperation in Europe, for instance, speak optimistically of a positive shift in building democratic institutions.

This latest modification of Turkmenistan’s constitution cannot, therefore, be view as a stepping-stone to democracy. However enticing the reforms sound, they will exist only as pieces of paper.

Vyacheslav Mamedov heads the Turkmen Civil Democratic Union, an émigré group based in The Netherlands.

Turkmenistan
Rule of Law, Human rights
Connect with us