The regime insists the country is virus-free, but experts warn of an impending crisis.

The regime insists the country is virus-free, but experts warn of an impending crisis. 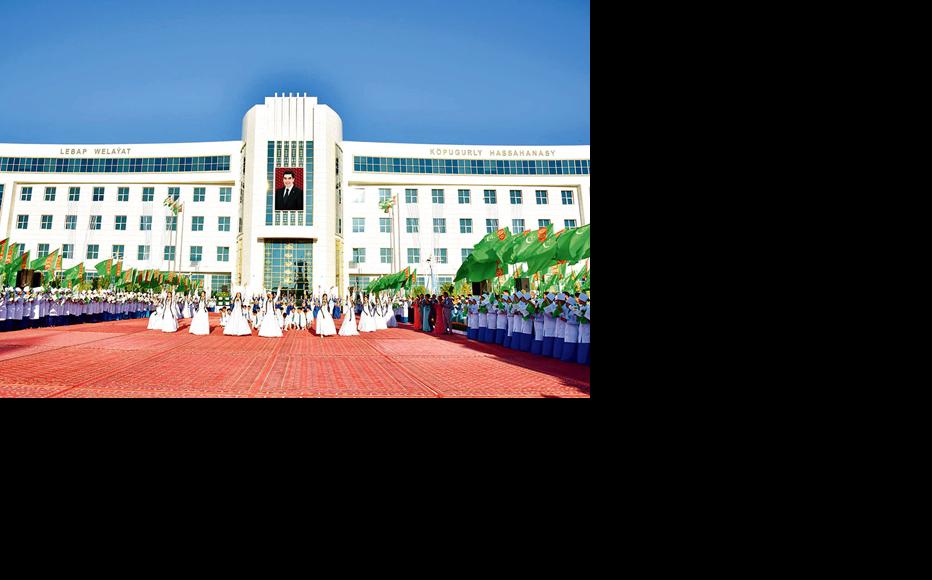 Opening of a new hospital in Turkmenabat city in July 2018. (Photo: turkmenistan.gov.tm)
The link has been copied

Concerns are growing over how Turkmenistan, one of the world’s most closed societies, will deal with coronavirus as the regime continues to deny that any cases have been detected in the country.

A senior official in in the public health department of a city in Turkmenistan told IWPR that four people with suspected Covid-19 had been hospitalised in the local infectious diseases hospital on April 11.

Speaking on condition of anonymity, he said, “Even the management of the city health department are not aware of the actual situation with coronavirus. Extremely secret measures have been taken.”

He said that another group of people had also been quarantined in the same health facility, all of them having travelled from the Azerbaijani capital of Baku at the end of March.

Turkmenistan borders Iran, where about 500,000 cases of Covid-19 were registered by the beginning of April.

Although there has been no formal announcement of any quarantine, since mid-March the authorities have introduced some social distancing measures across the country.

Cafes, restaurants and entertainment centres have been closed, with flights and rail transportation shut down. Checkpoints have been set up on roads between the regions.

People arriving in Turkmenistan’s capital Ashgabat have always had to present their identification documents. Now they also have to show police a certificate from the law enforcement agencies in their area and a medical document confirming they do not have coronavirus.

Nonetheless, officially there have been no cases of infection and it is forbidden to wear medical masks or other protective gear in public spaces.

The authorities did not extend the spring holiday in schools, as has been the case in many other countries.

However, on April 13, doctors began to examine children under the pretext of a general medical inspection of the population announced by the president.

“After the spring break, my child went to school and was immediately sent to the visiting doctors for a preventive examination,” one Ashgabat resident told IWPR. “Doctors checked his teeth, throat, and eyesight, took his temperature and told him about the rules of handwashing and hygiene.”

She added, “Although everyone avoids talking about coronavirus, we are panicked and confused: everyone understands that the pandemic is coming here.”

Turkmen president Gurbanguly Berdymuhamedow has said that his country's sanitary and epidemiological situation was “stable and under control”.

On April 10, speaking at a Summit of the Cooperation Council of Turkic Speaking States via video link, he noted that “a set of measures was implemented to prevent the spread of a new type of infection – the Covid-19 coronavirus”.

Berdymuhamedow - the author of 11 books on medicinal plants - also ordered that all Turkmen citizens fumigate their houses with yuzarlik, a perennial herb, which he said would help kill the infection.

Funds allocated to healthcare are generally spent on the construction of large and impressive buildings in the capital and regional centres rather than on recruiting qualified medical workers or healthcare improvement.

In addition, Turkmenistan’s healthcare system has no capacity for treating and containing a mass outbreak of any infectious disease. Actual medical statistics are either hidden or manipulated, for instance concerning HIV/AIDS and other infectious diseases.

“The pandemic will reveal the low level of Turkmen healthcare, including diagnostics, not to mention treatment, the shortage of qualified [not just licensed] doctors and incorrect medical statistics,” Khadzhiev said.

He estimated that government expenditure on healthcare was between five and six per cent of GDP, an extremely low figure considering the country’s high infant and maternal mortality rates and rampant infectious disease. For example, in neighbouring Kyrgyzstan, health sector funding is 11.9 per cent of GDP.

Turkmenistan also ranks first among European and Central Asian countries by the number of deaths from tuberculosis, according to the Global Tuberculosis Report 2019, prepared by the European Centre for Disease Prevention and Control and the World Health Organisation.

“They understand that they will not be able to cope if the [coronavirus] epidemic starts, and therefore they do not want to tell people about it,” Khadzhiev said.

Another issue is that people often have to pay for every part of their own treatment.

For example, in the Turkmenbashi state hospital, patients need to provide not only their own food, bedclothes, medicines and cleaning products, but also bribe staff so as to receive medical care.

“All practicing doctors grew up in a corrupt system,” said Vyacheslav Mamedov, head of the Netherlands-based Democratic Civil Union of Turkmenistan human rights NGO. “They paid bribes to receive the job in medical institutions, paid a bribe to enroll to the Medical University in Ashgabat, which is 10,000 US dollars according to applicants.”

Studies at the Medical University, like at other educational institutions in Turkmenistan, focus more on student participation in public events, voluntary community work, greetings of presidential processions and dancing rehearsals for the endless holidays.

The real level of knowledge and qualifications amongst medical staff causes serious concern.

“In order to counter threats on such a scale as the Covid-19 pandemic, trained medical staff are required; those doctors currently practicing will not handle it,” Mamedov said.

“Those who are infected will have little chance of recovering given Turkmen healthcare.”

Inga Sikorskaia is the programme director of the School of Peacemaking and Media Technology in Central Asia and an independent journalist from Bishkek.

Coronavirus Pandemic, Giving Voice, Driving Change - from the Borderland to the Steppes
Turkmenistan
Crisis, Regime, Coronavirus
Connect with us