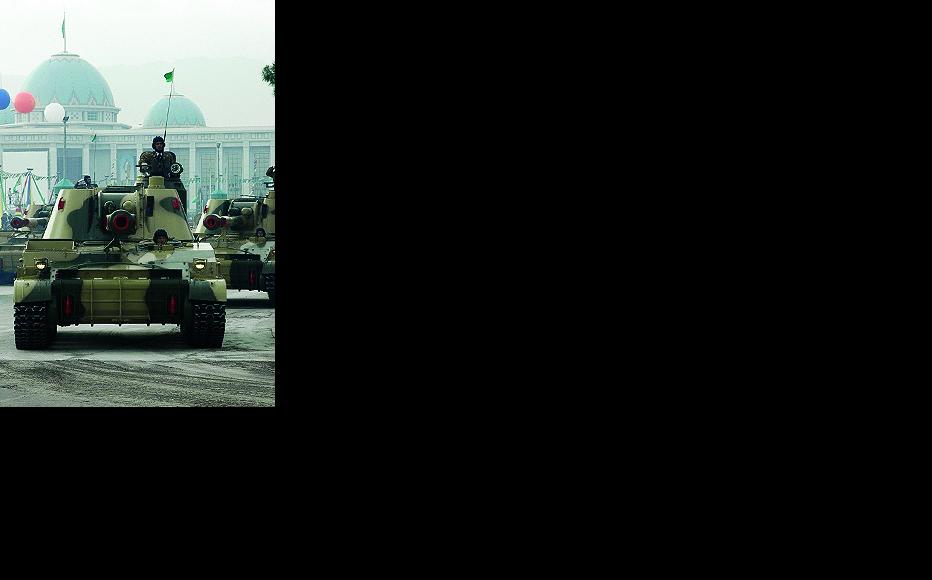 A self-propelled gun thunders past during a parade in 2009. (Photo © IWPR)
The link has been copied

The authorities in Turkmenistan, which has positioned itself as a neutral state since becoming independent in 1991, appear to be increasingly concerned about the country’ capacity to defend itself. They may be worried that Turkmenistan is located in an unstable neighbourhood, close to Iran and Afghanistan.

President Gurbanguly Berdymuhammedov, who is ex officio commander-in-chief of the armed forces, convened a meeting of the State Security Council on July 2.

The meeting took place at the Akdepe military base, where the president also took a look at some newly-purchased military equipment.

He got to try out flight simulators for SU-25 and MiG-29 jets, and inspected drone planes, helicopters, vehicles and other equipment designed for the troops who patrol Turkmenistan’s long external borders. At the other end of the technology scale, he was shown stables for cavalry horses.

Berdymuhammedov launched a modernisation drive in the military in June 2007, a few months after coming to power.

The armed forces were previously modelled on the Soviet military, which was geared up for large-scale offensive operations combining aircraft, armour and artillery. This model was not necessarily suitable for a small country like Turkmenistan that had declared itself neutral.

One effect of proclaiming neutrality and remaining outside regional security blocs was that no significant new arms purchases were made until Berdymuhammedov came to power. As a result, existing equipment became increasingly obsolescent.

“The armoured units at Serhetabad [Mary province] only had one tank in ten that could be started up and move off,” said a military commentator in the country who believes the authorities are doing the right thing in seeking to procure modern weaponry.

In January 2010, Turkmenistan adopted a five-year programme of improvements to the army and navy.

The Turkmen fleet in the Caspian Sea, based at the port of Turkmenbashi, was the weakest naval force deployed by any state around this inland body of water.

The navy has patrol boats made in Ukraine, Russia and the United States, some speedboats for the coastguards, and a destroyer leased from neighbouring Iran.

“Current challenges show there’s a need to rearm,” said a commentator in the capital Ashgabat. “Proximity to potential zones of tension in Kyrgyzstan, Afghanistan and Iran; the unresolved [border] issues with Uzbekistan; and the Caspian territorial dispute with Azerbaijan explain why the authorities plan to strengthen the army.”

Other commentators says that while new equipment is certainly needed, the authorities will also need to change the way military personnel are selected and trained.

A local media observer said a lecturer at the Military Academy told him that “85 per cent” of those who graduated had relatives in the defence and security sectors and had used their connections, and sometimes bribery too, to get in.

“None of them is willing to lay down his life for the country or its president,” he said.

Turkmenistan
Army
Connect with us