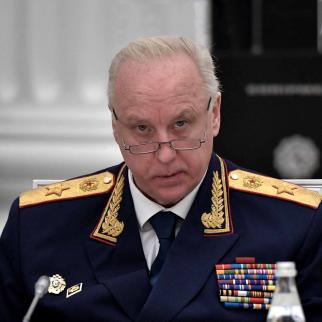 Alexander Bastrykin, who heads the Investigative Committee of Russia (SKR), announced plans to create a legislative process to collect evidence on Ukraine’s alleged crimes in the occupied east of the country. © kremlin.ru

Why Russia Wants its Own War Crimes Court 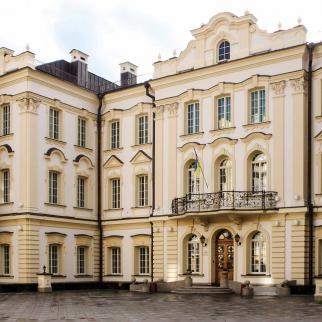 Building of the Supreme Court of Ukraine. © Wadco2/Wikimedia

On August 18 the EU provided information to the International Court of Justice (ICC) in the genocide case in Russia's war against Ukraine, according to an official press release, although no further details were provided.

Last month, at a conference held in The Hague, 45 countries signed a political declaration to work together on war crimes investigations in Ukraine. Currently, 29,000 cases of alleged war crimes have been opened by the prosecutor's office in Ukraine.

Ukrainian intelligence warned that Russia may launch a show trial in Mariupol to mark Ukraine’s independence day on August 24. The proceedings would involve Ukrainian prisoners of war, captured following the surrender of the Azovstal plant, which Kyiv noted was entirely illegal.

“All prisoners of war, and in particular the Azovstal defenders, are combatants who legally defended their country,” presidential adviser Mykhailo Podolyak tweeted.

More than 2,500 Ukrainian fighters from Azovstal are in captivity, with some believed to have been killed in a huge fire at the Olenivka detention centre at the end of July.

The families of the captives have appealed to the UN and the Red Cross to stop the proceedings. On August 22, President Voldymyr Zelenskyy said that "if this despicable show trial takes place… [it would be] in violation of all agreements, all international rules''.

As of August 23, the current number of “cases” opened by the Office of the General Prosecutor for war crimes is 28,568. The number rises further to a total of more than 43,600, including cases of crimes during wartime, which include robbery and Ukrainian citizens passing sensitive information to Russian forces.

The prosecutor’s office stresses that it is obliged, under Ukrainian law, to “open” a case any time it receives information of a potential crime. Some may not be true, some may not have adequate evidence. The office is working – including improving its own IT and database systems – to select and prioritize cases in terms of available proof and severity of the crime, for example, focusing on murder and sexual violence.

On current figures, 148 people have been officially charged with war crimes. Ukraine holds 15 prisoners of war; the rest are cases in absentia. Captured soldiers are investigated for potential crimes, and if none are found, held in camps and then exchanged for Ukrainian soldiers. So far, 18 people have been indicted, resulting in 8 verdicts. Five of these are Russian soldiers, with charges focusing on murder, abuse and destruction. Three of these are Ukrainian citizens, including from the self-proclaimed Donetsk People’s Republic, for robbery or cooperation as Ukrainian citizens with the invading forces.

The office has also lodged 624 cases of crimes of aggression. These are absentia cases against Russian leadership and elite, and relate primarily to analysis of public statements in the Russian and other mass media and other open-source material, as well as intelligence data, focusing on specific crime of aggression and calls and support for invasion.

The office does not currently provide numbers on investigations of Ukrainian army personnel. It does however confirm that there are ongoing investigations, although as yet no convictions. These are handled by a different military section, not the war crimes division.

Ukrainian Police Investigate Dozens of Cases of Collaboration Each Week

Police have initiated a total of 1,200 cases against alleged collaborators since Russia’s full-scale invasion began in February, with up to 160 investigations currently opened each month, according to official data.

Around half of the total number of cases involve Ukrainian citizens taking up official positions in the occupied territories. According to the ministry's data, this includes six representatives of state and local self-government bodies as well as four ex-employees of law enforcement agencies. These are alleged crimes during wartime, as opposed to crimes of war.

One Belarusian citizen was convicted of collecting data for his country’s intelligence and detained for five months.

On August 19 a law entered into force further enabling public access to court hearings, despite the ongoing state of emergency.

The Diya portal, available via a website or an app, can be used by residents of Ukraine to receive information on the court considering a case – including the place, date and time of the session – as well as on the subject of the claim and the parties to the dispute. Court decisions and executive document will also be accessible in electronic format.

The Ukrainian Supreme Court decided that access to electronic information regarding justice processes was an additional constitutional guarantee of the right to judicial protection.

In addition, the Ukrainian authorities called on citizens to report incidences of forced mobilisation in the occupied territories to report it online. A special chatbot was also created to search for information about military personnel who were captured and or were reported missing.