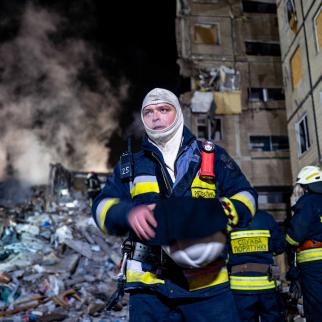 Emergency workers search the remains of a residential building that was struck by a Russian missile on January 15, 2023 in Dnipro, Ukraine. The attack is the deadliest single incident since Russia started targeting cities far from front lines in Ukraine. © Spencer Platt/Getty Images

How Will US Support Justice for Ukraine?

Prosecutor general Andriy Kostin met with heads of law enforcement agencies and prosecutors at the scene of the January 14 Russian air strike on a residential building in Dnipro.

“We are sure that the same type of rocket was used to commit this war crime which was already used in other cases: June 27 in Kremenchuk, July 1 in Serhiyivka, Odesa region,” he said. “This week, a decision will be made to combine criminal proceedings related to the use of these weapons.”

The number of dead reached 44 with dozens more missing.

“This tragedy is not just a war crime, it is a crime against humanity,” said Yuriy Belousov, head of the war crimes department of the prosecutor’s office, stressing that there were no military targets around the site.

In an official statement, the Ukrainian security services said that they had identified the Russian military involved in the missile attack on Dnipro.

Harman added that gathering evidence and bringing charges, “will be a long journey that will last several years”.

Four Russian servicemen who threatened and beat civilians during the occupation of Yagidne in the Chernihiv region were convicted of violating the laws and customs of war, the prosecutor general’s office reported.

Following an in absentia trial, a Russian mortar commander was sentenced to ten years in prison, while a deputy platoon commander and two soldiers were sentenced to 12.

The abuses included forcing civilians into unheated cellars in freezing weather at gunpoint, and holding them prisoner for several days without food or water.

A Russian guard who allegedly oversaw the torture of citizens in Kherson faces prosecution, the regional prosecutor’s office said.

In April 2022 the accused, an officer in the Russian National Guard, is alleged to have ordered the physical and psychological torture of two local detainees to obtain information about the Ukrainian defence forces. The men were held and tortured in the local police station and pretrial detention centre for several days.

A warrant has been issued for the accused’s arrest.

Criminal proceedings have been initiated against Russian lawmaker Adam Delimkhanov for his actions during the capture of Mariupol.

The Ukrainian security services said that Delimkhanov commanded the Kadyrov troops during the attack on the Azovstal steel works. In addition, the Russian state duma deputy distributed propaganda videos through his social networks in which he justified Russia’s war crimes in Ukraine.

The charges against him fall under two articles of the Ukrainian criminal code: assistance in changing the boundaries of territories and the state border of Ukraine and the justification/recognition of the legitimate armed aggression of the Russian Federation against Ukraine. Delimkhanov faces up to 15 years in prison or life imprisonment.