Local journalist on the risks people face when they cross paramilitary checkpoints.

Local journalist on the risks people face when they cross paramilitary checkpoints. 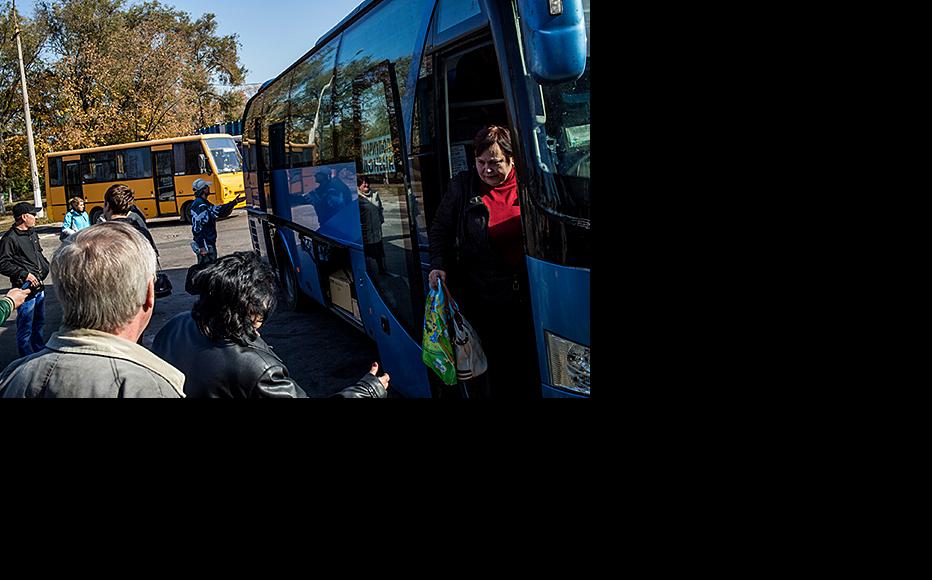 Passengers get off a bus that has come from Donetsk to Mariupol. (Photo: Brendan Hoffman © Getty Images)
The link has been copied

Some day I plan to write a guide to surviving armed rebellions for the ordinary person. The basics can be summarised in a single sentence – never touch weapons, keep your mouth shut, travel as little as possible and don’t carry a smartphone.

There are countless examples of how important these rules are in eastern Ukraine. I want to tell you some stories I have heard that illustrate this.

The first thing you need to understand that people in Donetsk region do not necessarily lead their lives strictly on one or other side of the front. They may move between Ukrainian government-held areas and the rebel Donetsk People’s Republic or DNR.

Take my friend Maxim Solorev. With his wife and daughter and seven foster-children, he lives in a suburb of Donetsk city, in other words in DNR territory. But that did not stop him travelling to Mariupol to monitor the Ukrainian parliamentary election on October 26, or from taking two of the children to Svyatogorsk for a Ukrainian government-sponsored rest cure.

Maxim ran into serious trouble when he set off to collect them and bring them home in his ancient Zhiguli car.  He had not got very far when two armed men stopped him. This was not an official DNR checkpoint, just a couple of paramilitaries hoping to siphon off some petrol from his car. Maxim was reluctant to pull over, so they forcibly detained him and handed him over to the DNR military as a suspicious character.

Held in a basement cell by a paramilitary unit called the Miners’ Division, Maxim found himself denounced as a “subversive”. The evidence cited by his captors consisted of a notebook found in his car in which “Glory to Ukraine” was written in a child’s hand, plus a length of cable that they argued could theoretically be used to trigger a landmine. They also found a credit card in his wife’s name issued by Privatbank, which belongs to pro-Kiev oligarch Igor Kolomoisky and is therefore viewed with hostility in the DNR. His smartphone contained two pictures of Ukrainian election posters in Mariupol. Finally, his captors found an ID card issued by the Opora newspaper – his authorisation to work as a poll observer.

When she found out what had happened, Maxim’s wife quickly set about trying to secure his release. I too used my contacts as a journalist and phoned everyone I knew in the DNR. I don’t know how it was done, but Maxim was released the following day.

His brother-in-law collected the children from Svyatigorsk a day later, taking his mother along partly in order to show his intentions were innocent, but also so that she could make a phone call if he was detained. For anyone living in the conflict zone and planning to cross through checkpoints, it is essential to have a way of contacting friends.

The second story concerns Yelena Tkachenko, detained at a checkpoint on the way into Donetsk. She was on the kind of mission that many city residents engage in – visiting her abandoned apartment to pick up warm winter clothing. Her passport shows her as a registered resident in Donetsk, so not a suspicious outsider.

Nevertheless, Yelena’s captors accused her of being a spotter for Ukrainian artillery. This might seem a strange charge, but young women are frequently stopped outside Donetsk to see whether their fingers show traces of gunpowder or their shoulders are bruised from firing a sniper rifle.

Yelena spent two weeks as a prisoner of the DNR’s Vostok Battalion. She was not harmed, but her jailers saw her as an asset they could swap for a high-value captive held by the Ukrainians, a Russian paramilitary fighter from North Ossetia.

The key to negotiating her release was not to make her captors think she was too valuable. During the Ukrainian election campaign, Yelena worked for the campaign team of Oleh Lyashko, head of the Radical Party. Her ex-husband Dmitry Tkachenko was head of Lyashko’s campaign team.

In the end, thanks to the mediation of the volunteer group known as the Responsible Citizens, the DNR military decided she was not worth trading and let her go.

The third story is about an old grudge that turned life-threatening for a man called Konstantin. A neighbour of his in Donetsk joined the DNR militia forces, and in October he turned up at Konstantin’s home and took him away.

The two men’s wives had never got on and had even been involved in a court battle. By this time, however, Konstantin’s wife was long gone – she had taken their three children away to Russia to get away from the conflict.

Konstantin’s mother ran into the neighbour at the market two days after the incident, and the man said he had handed his captive over to the DNR military to “face a tribunal”. The challenge was therefore to track down either Konstantin or the unit in which the neighbour was serving. This was difficult – there are dozens of informal armed groups in Donetsk, each running its own “prison”. There is no central register of captives, nor do the paramilitary forces keep much information about their men, many of whom go by a nom de guerre in any case.

The official security services in Donetsk advised Konstantin’s mother to wait until the neighbour turned up at his home, and then call them so that they could send out a squad to negotiate with him. In the meantime, Konstantin’s friends also launched a search for the unit that was holding him. After two weeks, they located him and bought his freedom. The neighbour was unaware of the deal until after it happened, and now he is hunting for Konstantin, who is in hiding.

War has a strange effect on people. Although Konstantin is in real danger and has no way of earning a living, he refuses to leave Donetsk. At 42, he has always lived in the city, where he used to head a team of security guards at a factory, and has never really travelled.

It would be wrong to suggest that all the hostage-taking takes place on the DNR said. On November 12 last year, three builders called Andrei Merzlikin, Alexander Pinchuk and Igor Vidny were captured by Ukrainian forces in Volnovakha. They were on their way into the town to inspect a house they had been building for the last two years. As well as being in the same company, the three are cousins.

One of the Ukrainian soldiers at the checkpoint examined Merzlikin’s phone and found a social media news stream that suggested he was a supporter of the DNR. Despite this, after checking all their papers and electronic devices, the soldiers seemed about ready to let them go.

But at that moment, catastrophe struck. Vidny’s wife called his phone, and the Ukrainian commander deliberately misled her by telling her he was a DNR officer and the men were going to be “put up against a wall and shot”. On hearing this, she desperately tried to convince the officer that her husband was a true DNR loyalist. Things only got worse as the other two wives called with similar messages about their husbands, and got others to do so as well.

The three builders were held first in some detention facility in Volnovakha ,and were later driven to Krasnoarmeysk and then somewhere near Slavyansk, as far as they could make out from overheard conversations. They were hooded most of the time so they could not see their captors.

Vidny’s nose was broken at the checkpoint when a soldier punched him in the face. On the first night in Volnovakha, Pinchuk was repeatedly beaten and suffocated with a plastic bag. He was left in such bad shape that it was the other two, Merzlikin and Vidny, who were beaten and kicked while being transferred to the different locations.

When the conflict began a year ago, Ukraine did not have much of an army, nor the will to fight. Since then it has acquired both those things, but also some people who are prepared to carry torture.

The three men had given up all hope of surviving when they were tied up, blindfolded and dumped next to their own minivan on November 22, ten days after their capture. They eventually made it back to Donetsk.

Of the various items stolen from the vehicle, Vydny most regretted the loss of his prized fishing flies.

War creates alienation as well as animosity. These three men have never taken up arms and never will, but their trust in the government of Ukraine has been totally undermined. They do not plan to file a complaint with the Ukrainian authorities, partly because it would mean crossing out of DNR territory again. They used to travel around Ukraine doing building jobs in Kiev and Dnepropetrovsk, but now they intend to remain firmly on the DNR side.

Dmitry Durnev is editor-in-chief of the MK-Donbass newspaper in Donetsk.