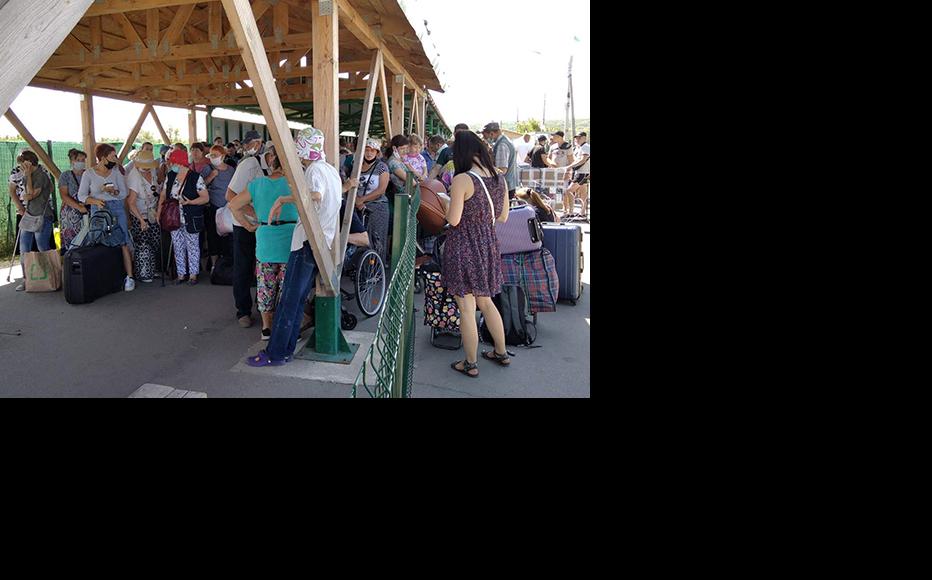 At the Stanytsia Luhanska checkpoint, people who arrived from the Luhansk side are waiting for Ukrainian border guards' permission to enter the Ukrainian-controlled territory. (Photo: The Right to Protection NGO) 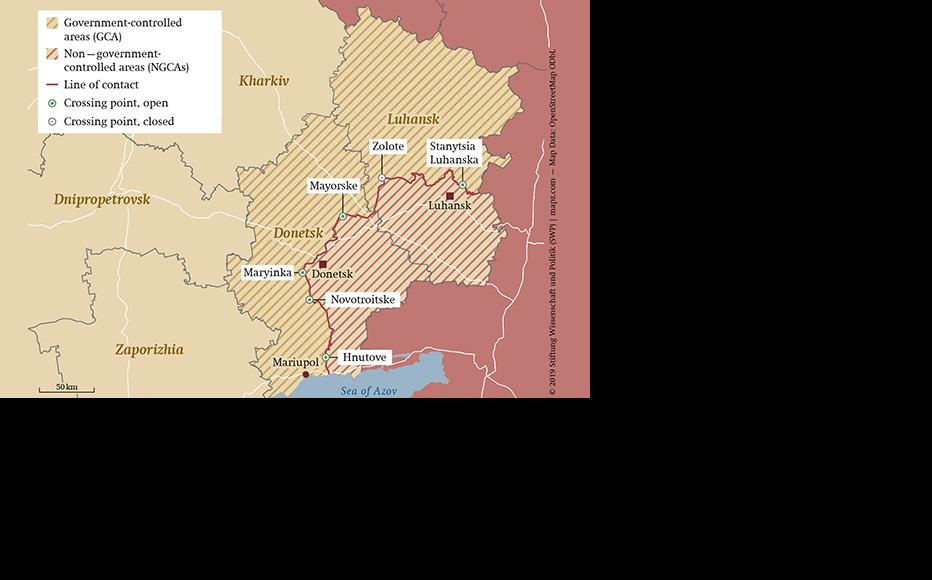 Tetiana is packing a suitcase with clothes for her and her son. Although it is still summer, she includes clothes for autumn and winter, too. While they only need to leave their home in the unrecognised Donetsk People's Republic (DPR) for a few days to travel to Ukrainian-controlled territory so the teenager can take university exams, they have no idea when it will be possible to return.

All four checkpoints on the frontline in the Donetsk region are closed as part of quarantine measures, with the only exit for people like Tetiana the single so-called humanitarian corridor, open two days a week.

While there are certain categories of people who are eligible to apply for entrance to the DPR, only those who are registered somewhere outside the self-proclaimed republic are allowed to leave.

This rule was enforced in June as both sides started to lift anti-Covid-19 measures, although no explanation was given as to its purpose.

The situation is different in the neighbouring de facto Luhansk People's Republic, where the single checkpoint is open to all who are willing to enter Ukrainian government-controlled territory.

But the de facto border between the two is closed from the Donetsk side; the exact direction in which Tetiana and her son are heading to enter Ukraine.

Some people smugglers in Donetsk quietly advertise their services for these illegal crossings between the DPR and the LPR. Others, like Tetiana, choose the Russian direction which is generally open for both exit and entrance to those registered in the self-proclaimed republics.

It takes approximately 30 hours and costs up to an average Ukrainian monthly salary of 350 euros to cross the border into Russia and then return to Ukraine through a legal border checkpoint.

Once in Ukraine, travelers are often met either with penalties for illegally crossing into Russia through separatist-controlled parts of the Ukrainian border, or demands for bribes in order to avoid these charges.

To guarantee trouble-free access, some travelers make additional payments of around 15 euros to minibus owners, who presumably share the money with border guards.

The journey could be shorter and cheaper - and appear legal in the eyes of the Ukrainian authorities - if someone from Donetsk could first enter Luhansk from Russia in order to use the local frontline checkpoint. But the de facto Luhansk authorities do not allow people with a passport registered in territory under DPR control to enter the LPR from the Russian side.

Some young people from Crimea, Luhansk and Donetsk regions continue to see their future in Ukraine, despite the six-year-old conflict.

Since 2019, Russia and both eastern Ukraine statelets have conducted an aggressive campaign to award Russian citizenship to people who live in Donetsk and Luhansk. But a Ukrainian passport is more appealing to many youngsters because of the visa-free entry it guarantees to the EU.

To enter a university in Ukraine, a prospective student must pass standardised external testing (SET) which replaced university exams about a decade ago to combat widespread corruption in education. There are exact dates and places for the SETs.

Until recently, only a few Ukrainian universities offered dispensations to applicants from the occupied territories, disadvantaged because they had fewer possibilities to learn Ukrainian language and history to pass the tests.

But these universities often lack both staff and facilities, had been affected by conflict themselves and were located mostly in small towns in distant provinces.

As of this summer, those from Luhansk or Donetsk can apply to any university in Ukraine, and all Ukrainian universities can now accept prospective students from the occupied territories without the need to take the SET.

Nonetheless, many of these students struggle to actually travel to Ukraine-government controlled territory. As for Tetiana's son, he still wants to participate in the SET as it will allow him to apply to a number of universities at the same time.

Even though he lives in Donetsk, the boy is preparing to obtain a Ukrainian higher school certificate. Some schools in Ukraine provide online education for children in his situation, and he took Ukrainian lessons in parallel to those offered at his school in Donetsk.

But all these efforts to enter a Ukrainian university could be in vain if Tetiana and her son cannot find a way out of the DPR in time to take part in the latest SET round.

Before the quarantine, the Ukrainian Border Service had registered about 2.3 million monthly frontline crossings. Now, there are only 1,200 crossings in the Luhansk region per day and up to 400 in the Donetsk region when the humanitarian corridor is open.

The majority of those who used to cross the frontline into Ukraine usually returned the same or the next day. This is no longer possible due to the 14 day period of enforced isolation for anyone who enters from the de facto republics.

“Those who are leaving through the DPR ‘humanitarian corridor’ are obliged to sign a commitment not to return until the ‘special order of the ‘republic's’ de facto head which should mark the end of the quarantine restrictions,” explained Yulia Tralo, a legal support coordinator at the Right to Protection advocacy group, which monitors the checkpoints in the east of Ukraine. “Those who signed were unable to come back even through Russia.”

Up to a dozen prospective students have crossed the Luhansk checkpoint daily for Ukraine in recent days, according to Right to Protection. In Donetsk, university admission is considered a viable reason to enter - but not to leave.

Numerous Telegram chats have been circulating since June to discuss the checkpoint issue and to share relevant information. The most popular explanation of the DPR exit restriction is to try and deter those wishing to study in Ukraine.

Earlier this year, Leonid Pasiechnik, the self-proclaimed head of the LPR, announced that as the number of local prospective students had declined since the beginning of the war, there were now about 8,000 funded universities places for about 5,000 high school graduates. The situation in the DPR is similar.

Donetsk and Luhansk officials are now promoting the narrative that prospective students face grave dangers if they cross over to Ukrainian government controlled territory..

In Donetsk, at the beginning of July, a representative of local paramilitary forces claimed that the Ukrainian authorities had lifted SET requirements for prospective students from Donetsk and Luhansk in order to lure them into their territory so as to charge them with separatist crimes and exert pressure on their relatives.

Three weeks later, a Luhansk paramilitary forces representative stated that prospective students from the LPR and DPR had been arrested and forced to collaborate by the Ukrainian security services.

While International Committee of Red Cross (ICRC) representatives can freely enter both de facto republics, OSCE Special Monitoring Mission (SMM) reports numerous prohibitions on access from the de facto republic’s side. There appeared to be no differences in the numbers of access denials between the LPR and the DPR.

In June 2019, SMM OSCE reported 74 cases of access restrictions compared to 97 cases in June 2020. Only a few cases occurred in the Ukrainian government-controlled side.

Angelique Appeyroux, head of operations at the ICRC Ukrainian office, explained that she was trying to facilitate contact line crossing in emergency cases such as a close relative’s illness or death.

“It is within our mandate to help in these cases and to connect families that are in a dire need,” she said. “For other types of civilian crossing, the ICRC is not helping because there are authorities in charge who are regulating civilian crossing.”

An aide to Halyna Tretiakova, a Ukrainian representative at the peace negotiations process which was launched in summer of 2014, said that negotiations on the checkpoints were in process and that an official report would be posted on the presidential website in due course. She declined to comment further.

No information regarding the checkpoints have been published since the last contact group's meeting.

The Kharkiv Human Rights Protection Group has collected evidence of people who were or are trapped in the DPR in order to make a legal complaint against Russia to the European Court of Human Rights, (ECHR) according to one of its advocates, Hanna Ovdiyenko.

Ukrainian activists see the checkpoint closures as a violation of rights to movement and to private life, as many families have been divided.

Russia denies its involvement in the DPR and the LPR and many in Ukraine are waiting for the ECHR decision of an interstate dispute between Kyiv and Moscow which is expected to recognise effective Russian control of the Donetsk and Luhansk de facto republics.

If this happens, the numerous private complaints to the ECHR against Russia will gain legal ground, although the process is likely to take years, if not decades.

Giving Voice, Driving Change - from the Borderland to the Steppes
Ukraine
Disinformation, Life
Connect with us