Training a New Generation of Teachers

Children in Idlib are getting a fresh chance to complete their education.

Training a New Generation of Teachers

Children in Idlib are getting a fresh chance to complete their education. 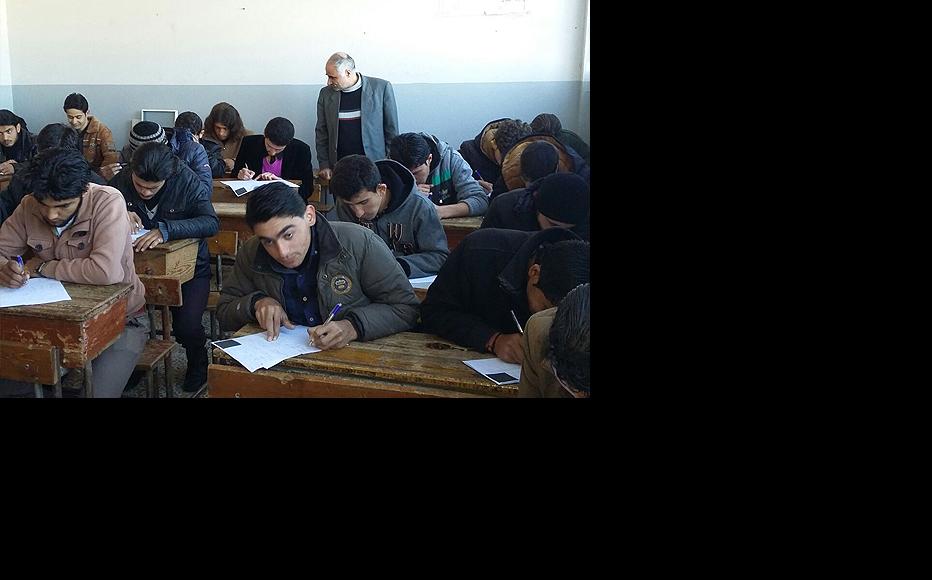 Students inside a teaching institute classroom. (Photo: Darin Hassan)
The link has been copied

Usama al-Sheikh was a student at Aleppo university when the Syrian revolution erupted.

During the early days of the uprising, the 20 year-old continued to travel from his home town of Maarat al-Numan to Aleppo for lectures.

As the situation deteriorated, government roadblocks and checkpoints were set up along his route. Al-Sheikh’s long commute became too dangerous and he was forced to abandon his education.

“I had to choose between risking my life on a daily basis, or abandoning my undergraduate studies,” he told Damascus Bureau.

Fortunately for al-Sheikh, another opportunity appeared.

“An institute for training teachers was founded in Idlib, and I was offered a fresh opportunity to study and earn a certificate that would later help me secure a job,” he said.

The institute was established by the free Syrian directorate of education in 2013. Its main goal was to train teachers to staff schools, ensuring that children residing in the governorate of Idlib were granted their right to an education.

So far the institute has opened branches in the towns of Jarjanaz, Al-Baro and Harim, all of which offer two-year courses.

A range of subjects are taught, including teaching, science, mathematics, Arabic, English and French.

“All staff members who teach at the institute hold university or postgraduate degrees, and have background experience in teaching,” Abdul Rahim, who lectures at the institute, told Damascus Bureau.

“The curriculum was designed by special committees. It was a lengthy process that took almost a full year to deliver,” the 45 year-old said.

According to Jamal al-Shahoud, head of the free Syrian department of education, the institute was created for students who had been forced to drop out of university, or who had graduated from opposition-run secondary schools.

“The past few years brought about a regression in Idlib’s education sector, and one of the main reasons was the shortage in teachers,” he continued.

“After Idlib was liberated, the government responded by expelling large numbers of civil servants and teachers who sympathised with the revolution.

“Many others were detained or killed, which forced the majority of those remaining to flee to safer areas,” 46 year-old al-Shahoud said.

“The initiative has granted students an opportunity to pursue a specialist degree, and find suitable jobs,” explained al-Shahoud.

“As teachers they will be able to provide children with an education, which will save them from the clutches of ignorance and illiteracy.

“This is our way of standing up to those who are trying to destroy their dreams.”

The institute operates under exceptional circumstances. One major concern is the constant shelling, which puts great pressure on staff and students.

Another challenge is funding. The education department’s resources are limited, which means it relies on registration fees and donations from humanitarian organisations to cover running costs.

Nevertheless, the institute saw its first class of 300 male and female students graduate in 2015. It secured jobs for the top 50 graduates in a variety of schools, and has been holding recruitment campaigns across the governorate for all other teachers. The most recent campaign secured jobs for 1,171 teachers.

Umm Shadi’s daughter was one of those employed by the department.

“My daughter finished high school just as the revolution started,” the 45-year-old explained. “Out of fear for her safety, her father forbid her from going to university, as it would involve travelling to regime-held areas.

“My daughter had always been a top student and was distraught at the idea of not continuing her studies. When the teaching institute opened she immediately enrolled, and has now obtained her degree and teaches at one of its schools.”

Umm Shadi said that the institute had provided her daughter with a new vocation as well as the means to earn a decent income.

Darin Hassan is the pseudonym of a Damascus Bureau contributor from the Idlib countryside.

Syria
Life
Connect with us