Rights groups insist that international pressure is the only hope of moderating regimes’ brutal behaviour, and that now would be a good time to apply it.

Rights groups insist that international pressure is the only hope of moderating regimes’ brutal behaviour, and that now would be a good time to apply it. 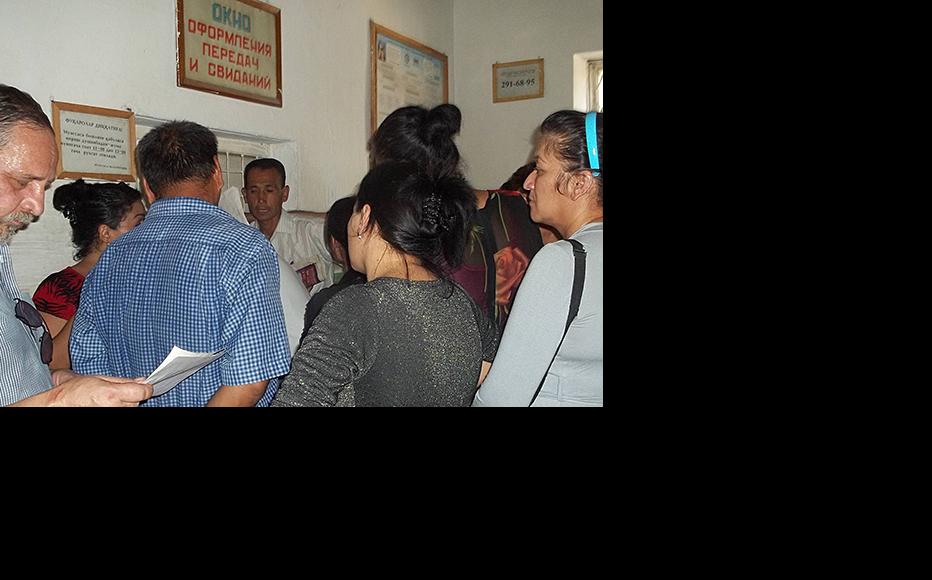 Prison visit time in Uzbekistan. (Photo: IWPR)
The link has been copied

Human rights groups that monitor Central Asia’s most repressive states, Turkmenistan and Uzbekistan, say the only hope of securing the release of political prisoners is for the international community states to step up its currently weak pressure on the two governments.

One paper by the New York-based group Human Rights Watch last month, called 'Until the Very End’: Politically Motivated Imprisonment in Uzbekistan, said here were around 12,000 political prisoners in the country. It accused the authorities of using ill-defined charges of “anti-constitutional activity” and “religious extremism” to imprison many of them, while others were sentenced on fabricated charges of bribery, fraud or extortion.

Interviewees made credible allegations of torture and other forms of mistreatment, including beatings with rubber truncheons and plastic bottles filled with water, electric shock, threats of rape and sexual humiliation, and denial of food or water.

The Human Rights Watch document followed a report on Turkmenistan’s prison system from the Prove they Are Alive! Campaign, run by a coalition of rights groups including Human Rights Watch and Crude Accountability. This report, Prove They Are Alive! The Disappeared in Turkmenistan, and the accompanying film Ovadan Depe: Medieval Torture in Modern Turkmenistan, documented the cases of dozens of individuals who have disappeared in the notorious Ovadan Depe jail, used to hold political prisoners.

Over 60 of them were imprisoned in connection with an alleged coup attempt in 2002 against the late president Saparmurat Niyazov.

An activist from Ashgabat, who asked to remain anonymous, acknowledged that some prison reforms had taken place under Niyazov’s successor Gurbanguly Berdymuhammedov. It had become easier to send parcels to inmates, the frequency of prison visits had been increased to twice a month, and family members were now allowed to stay overnight.

However, the plight of political detainees remained unchanged, she said.

The Ovadan Depe report was presented at a key meeting of the OSCE’s human rights arm, the Office for Democratic Institutions and Human Rights, held in Warsaw in September.

Despite repressive policies that extend to media, policing, and freedom of assembly as well as political detentions, neither Turkmenistan nor Uzbekistan features high on the international community’s agenda.

The Human Rights Watch report said that the EU and its individual members took a “weak” position on Uzbekistan, “with only rare public expressions of concern” and “no policy consequences” for government intransigence. Washington, meanwhile, “has avoided attaching any serious policy consequences for Uzbekistan’s failure to improve its overall abysmal human rights record, including its continuing failure to release political prisoners and continuing imprisonment of civil society activists”.

Steve Swerdlow, Human Rights Watch’s Central Asia researcher, told IWPR that Uzbekistan and Turkmenistan “should be subjected to the same degree of criticism as the United Nations levels against Zimbabwe, North Korea and Iran”.

In the current environment, “senior officials visiting Ashgabat and Tashkent do not hold press conferences, do not publicly call on the authorities to release prisoners, and do not speak their names in public”, Swerdlowsaid. “That plays into these governments’ hands.”

As the report on Uzbekistan notes, President Barack Obama’s administration “views Uzbekistan as a critical part of the Northern Distribution Network through which it has sent non-lethal supplies to Afghanistan”.

But the proximity of both Uzbekistan and Turkmenistan to Afghanistan could work both ways. Swerdlow said the two countries were now requesting more support from the West to manage potential political instability that could emerge after NATO forces withdraw from Afghanistan this year. This gave the international community greater leverage for demanding action on human rights abuses, he said, adding, “Pressure from the international community should be increased now.”

Swerdlow said the factual information provided by reports such as the two recent ones on prison conditions should allow foreign diplomats to “engage in open and sometimes difficult discussions with the authorities, and to impose sanctions such as compiling lists of Turkmen and Uzbek government officials banned from travelling to Western countries. The authorities must be required to identify officials and individuals involved in torture in jails.”

These tactics demonstrably work, Swerdlowsaid, noting that in the past, “when there have been sanctions and pressure on the regime and public criticism, the Uzbek authorities have released whole groups of political prisoners, not just individuals”. He also pointed to the international campaign against child labour in Uzbekistan’s cotton industry, which resulted in the practice being curbed at least partially.

Annadurdy Khadzhiev, a Turkmen opposition activist who lives in Bulgaria, agrees that only sustained pressure will force the government in Ashgabat to divulge information about the fate of prisoners who have disappeared without trace over the years.

“Human rights activists are doing the right thing by painstakingly gathering information to compile such reports, by running campaigns, and drawing attention to appalling rights violations, torture and political prisoners,” he said. “Unless you pressure an authoritarian regime, it will not be afraid and it will continue these outrageous practices.”

Vyacheslav Mamedov, head of the Netherlands-based Civil Democratic Union of Turkmenistan, says the government has almost wiped out dissent after so many years of persecution.

Mamedov said that while it was possible that young people who had studied abroad and experienced freedom might bring some of that spirit back to Turkmenistan, he was not optimistic.

“Some of them have settled abroad and those who returned have been crushed by the regime,” he said.

Inga Sikorskaya is IWPR editor for Turkmenistan and Uzbekistan, based in Bishkek.