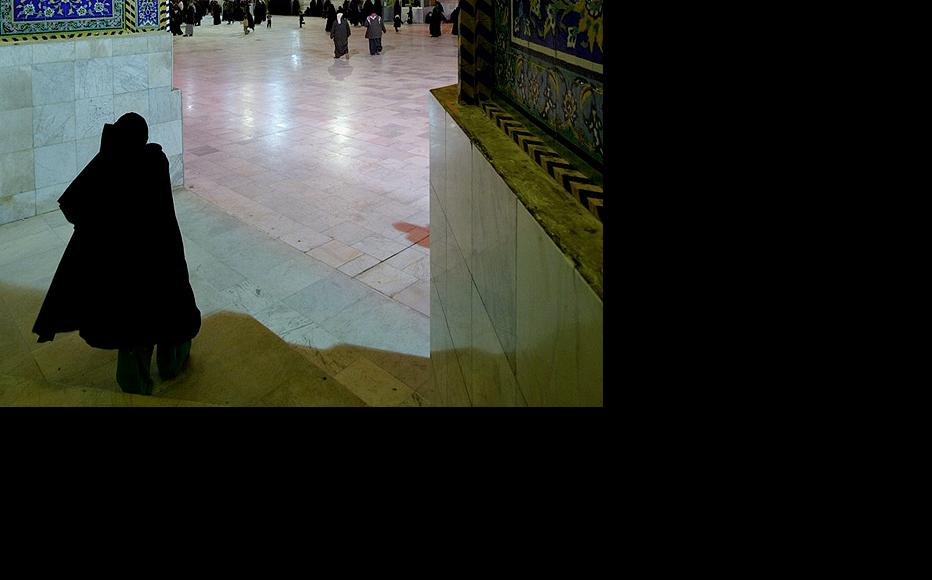 Supporters of mutta say it protects vulnerable women from exploitation by offering them a flexible marriage contract, backed by a religious authority. (Photo: Sirwan Aziz/Metrography)
The link has been copied

As the lunchtime lull descends over Basra's Al-Ashaar market, two women weave through dwindling crowds to a store owned by Adel, a grocer in his early forties.

After they enter, the door is locked and a sign appears, declaring the shop shut for the afternoon.

The women - a mother and her daughter, both widowed - were once regular customers of Adel’s. Now they see him only weekly, choosing a time when they are least likely to be spotted by other shoppers.

Their dealings with Adel are no longer commercial. Though the manner of the visit is covert, its purpose is lawful.

Two years ago, Adel and the younger of the two women entered a relationship known as a “mutta” or temporary marriage: a union that allows both parties to tailor the terms and duration of a wedding contract to their wishes.

While the mother waits in the shop, the couple retreats to another room to pass the afternoon in each other's company.

Such caution befits a relationship that risks the censure of a deeply conservative society, where sex outside the confines of a traditional marriage is treated as a taboo.

Yet mutta is sanctioned by the Shia Muslim faith and appears quietly to be on the rise in Iraq, thanks partly to decades of war and hardship.

Successive conflicts have left behind more than one million widows in a country of roughly 30 million people. They have also deprived millions of men of the assets, such as a home and a job, that might help them enter a traditional marriage.

For a generation of women left widowed or unmarried by conflict, and for a generation of men who are unwilling or unable to take them as wives, mutta has emerged as a controversial alternative to conventional wedlock.

”Today's youth find it harder to afford marriage and build a family,” said Adel. “Mutta marriages facilitate physical relationships. They are easily available to whoever that goes looking for them.”

A friend of Adel’s, Majid, said he too had been involved in temporary marriages with two women - a war widow and a spinster. While neither woman had been in a position to enter a permanent relationship, the mutta arrangement had worked to the benefit of all parties involved, he said.

“You should not disdain mutta,” he added. “If followed legitimately, it would solve the problem of [unmarried] youth in this country and prevent the spread of adultery.”

Both Adel and Majid’s real names have been withheld in order to protect their privacy.

Supporters of mutta say it protects vulnerable women from exploitation by offering them a flexible marriage contract, backed by a religious authority.

Critics of the practice say women engaged in mutta still lack the rights of ordinary wives and are, in some cases, stigmatised as no more than prostitutes operating under institutional cover.

“I believe in the legality of mutta but I keep wondering about the secrecy thing. How can a relationship that is kept hidden also be halal (religiously acceptable)?” said Saba Saeed, a government employee in her late thirties from Baghdad.

The origins of mutta date to the earliest days of Islam. The practice is restricted to Shia Muslims, who make up the bulk of Iraq's population and who have dominated its political life since 2003.

Mutta is thought to be the only form of wedlock where specific limits can be set on the time and the nature of a relationship. Most Sunnis regard it as immoral. However, some Sunni societies in the Middle East tolerate variations of the traditional marriage that may also be clandestine.

Polygamy is approved under Islam and practised by both Sunnis and Shia. In some Sunni-majority parts of Iraq, it has been advanced as a way of taking care of a growing population of war widows.

Mutta has long been common in Iran and has more recently become widespread in the Iraqi holy cities of Najaf and Karbala, which host tens of thousands of Shia pilgrims every year.

”If mutta is followed according to its rules, it would solve many of the problems of the people,” said Sheikh Saeed al-Saadi, an imam in Basra and a representative of Ayatollah Ali al-Sistani, the spiritual leader of Iraq's Shia.

Describing mutta as a “religiously legitimate marriage, agreed for a specific period”, Saadi said the practice dated to the time of the Prophet Mohammed and had flourished because it was flexible and fair.

Saadi said any children conceived through mutta were regarded as legitimate heirs to their fathers, although women in the relationship did not have a right to their husband's property. The length of temporary marriages could vary from minutes to years.

The contract did not always require the woman to secure the consent of a guardian - a factor which had accounted for mutta's popularity among the young, said Saadi.

Despite the Shia clergy's support for mutta marriages, the relationships are usually maintained discreetly, reflecting entrenched cultural taboos against sex outside conventional marriage. According to NGO workers interviewed by IWPR, the secrecy surrounding the practice has made it hard to gauge its extent or address its impact.

“It’s difficult to get an accurate figure,” said Wiyam Jassim, the head of a Baghdad statistics centre affiliated to Women's Dawn, a charity. “Sometimes women would be threatened by their partners if they made the relationship public.”

Batul Faruq, a member of parliament who heads a women's NGO in Najaf, said clerical approval alone was not enough to overcome social prejudice against mutta. She cited how temporary marriages were more common in Iran rather than Iraq, although both countries had a Shia majority.

“Iran is more liberal and Iraq is more tribal,” she said. “Even permanent marriages in Iraq are more likely to be arranged by tribes, rather than by individuals.”

Despite a lack of hard figures, anecdotal evidence indicates that the popularity of mutta marriages has grown dramatically in recent years.

According to Mazin al-Shehani, the former head of a Baghdad provincial government committee in charge of displaced people and immigrants, a succession of recent wars – from the Iran-Iraq conflict to the United States-led invasion – is responsible for the rising popularity of mutta.

“The high number of widows has made Iraq a market for mutta,” he told IWPR. “There was no other answer to the problem of widows... it was the spontaneous solution.”

Shehani, who is allied to a popular anti-American Shia cleric, Muktada al-Sadr, said mutta had historically served to “satisfy the needs of a woman who could not get married for whatever reason”.

Dr Saeed al-Essadi, a professor of psychology at Basra university, said the rise of mutta was linked to unemployment and a weak economy, which had made it prohibitively expensive for many people to get married and raise a family.

Strict sexual mores that prohibited unmarried men and women from mixing had, he said, also contributed to mutta's popularity.

Several observers argued that the internet and mobile phones had also played a part in the mutta boom by fostering virtual courtships that could only eventually be consummated through temporary marriages.

Critics of mutta include Sunni Arab politicians whose community has a long, occasionally violent, history of rivalry with the Shia. They too acknowledge that temporary marriages have flourished as a by-product of Iraq's conflict and ruined economy.

According to Sabhan Mulla Chiyad, a member of the provincial council in the largely Sunni Arab province of Salahaddin, some married men see mutta as a way of avoiding responsibility at a time of financial insecurity. In effect, he said, the temporary marriage is a cheaper alternative to taking a second wife in a polygamous relationship.

”They can't afford supporting a new household so they try to fulfill their needs temporarily,” he said. “They don't have a firm grip on their future.”

Chiyad accused leaders of turning a blind eye to mutta and warned that the phenomenon would spread unless Iraq's economy improved.

Izhar al-Samarai, a former lawmaker from the Iraqi Accord Front, a Sunni Arab bloc, described temporary marriages as “the scourge of society”.

“I believe mutta lacks a fundamental pillar [for a respectable marriage], which is permanence,” she said. "People believe it is easy to enter such relationships because it doesn't involve any financial obligations."

Samarai said referring to mutta as a form of prostitution should not be seen as a sectarian slur against the Shia, but rather a reflection of the way women were treated inside the relationship.

“God has preserved the dignity of mankind through certain forms of marriage,” she said. “Mutta doesn't secure any rights for women - no alimony, no house etc.”

Legal experts interviewed by IWPR confirmed that temporary marriages were not viewed as legitimate by Iraq's courts.

“If a woman went to court claiming she was related to a man through a temporary marriage, the court would not recognise it. Iraqi law only recognises permanent marriages,” said Aswad al-Munshedi, the former head of the Iraqi lawyers' union.

However, Munshedi added, a child born from such a union would still have a right to an inheritance, irrespective of whether the relationship between his parents was legitimate or not.

Shia officials staunchly defend mutta against these accusations. However, they acknowledge that the relationships, while acceptable in theory, may often be troublesome in practice.

“Although mutta is permitted by the faith, those who follow it can face serious problems because of traditional objections,” said Saadi, the imam and representative of Sistani in Basra.

Shehani, the politician allied to Sadr, said the recent surge in mutta marriages in Iraq had been problematic because it had not taken place under strict Islamic conditions.

“The woman became a victim of the man's desire. The man's goal was no longer to satisfy the woman's need... He did not respect the woman,” he said.

Doubts and divisions over mutta were reflected on the Baghdad street. A 38-year-old woman who gave a first name only, Milad, said she had been misled by mutta's apparent legitimacy when she entered a temporary marriage with her cousin. Her family had opposed the match because he was already married, and the relationship had to be kept a secret.

“As the marriage was permitted by religion, I thought it was a suitable solution,” she said. “But after a few months, we had to split up because of the family's disapproval. I was broken-hearted.”

According to Mohammed Baqir, a college student in his early twenties, mutta gave the veneer of legitimacy to a relationship that would ordinarily be forbidden. “I compare it to Islamic beer,” he said.

In Basra, Adel, the grocer, said he hoped to maintain his mutta marriage for as long as possible. “The important thing is to have someone with whom you can consummate your passion,” he said.

Although his partner's mother wanted him to make the relationship permanent, Adel said he could not do so because he was already married – to the mother of his six children.

“My wife would kill me if I married again,” he said.

This story was produced by IWPR-trained reporters in Basra, Najaf and Baghdad. They have not been named for security reasons. IWPR editors Mohammed Furat and Abeer Mohammed contributed from Erbil and Baghdad. IWPR Iraq editor Neil Arun edited this story from London.

Women's rights
Connect with us