Video shows Iranians rallying in support of regime change in Egypt and at home.

Video shows Iranians rallying in support of regime change in Egypt and at home. 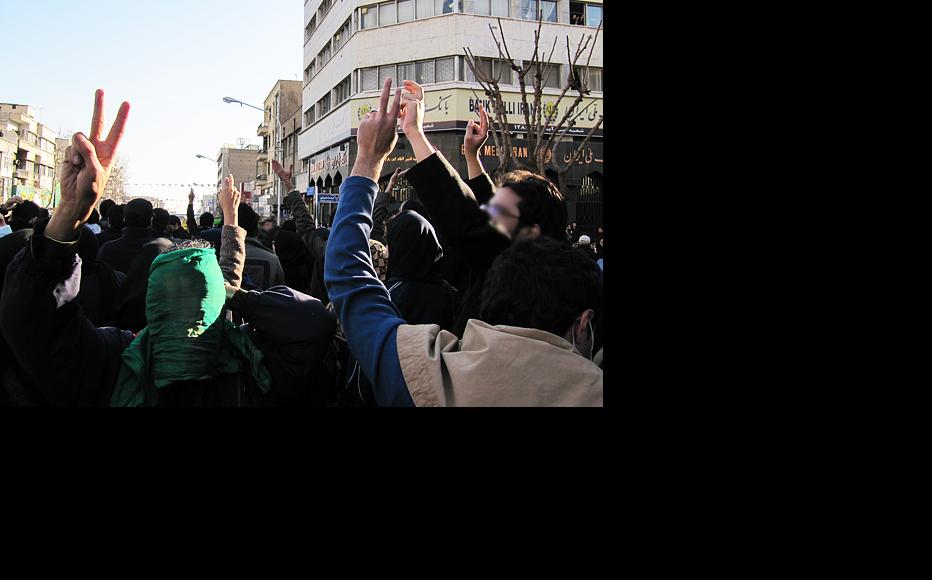 Protesters stream down roads that will take them to Azadi Square in central Tehran. (Photo: Mianeh)
The link has been copied

Thousands of demonstrators took to the streets of the Iranian capital Tehran this week for their own “Day of Rage” in support of the Egyptian pro-democracy movement.

IWPR has obtained rare footage of the protesters as they set off down Enqelab and Azadi Streets towards the city centre on February 14.

After clashes with the security forces, in which two people are reported to have died, the crowds dispersed.

Later in the film, we see chaotic scenes in the streets, lit up by a rubbish bin set on fire. A man holds a handwritten placard describing Iran’s Supreme Leader Ayatollah Ali Khamenei – a figure normally regarded as beyond criticism – as a “murderer” whose leadership is “invalid”. Voices can be heard calling for the “death” of the principle of “velayat-e faqih”, the system that underpins the Supreme Leader and lies at the heart of the Islamic regime in Iran.

Riot police and pro-regime Basiji volunteers on motorcycles then swarm through the street to drive the remaining demonstrators away.

Although the Islamic regime has tried to claim ownership of the Egyptian uprising, the opposition Green Movement makes a more direct and valid comparison with its massive popular protests against the 2009. The “Day of Rage” was the opposition’s first major outing since the brutal clampdown and campaign of intimidation that quelled open protest by the end of 2009.

The fear instilled by President Mahmoud Ahmadinejad’s security forces has taken its toll. Thousands did summon the courage to join the protests, but they were much more jumpy than in 2009.

When the photographer who captured these images was spotted, demonstrators assaulted him and forced him to delete most of his pictures. They released him only after they calmed down and realised he was not gathering intelligence for the security police.

These images were saved from a second camera he was carrying.

The incident shows how difficult it has become to report from Iran, even in comparison with the 2009 disturbances. These days, opposition supporters seem almost as suspicious of citizen journalists as the authorities are.

Iran
Connect with us