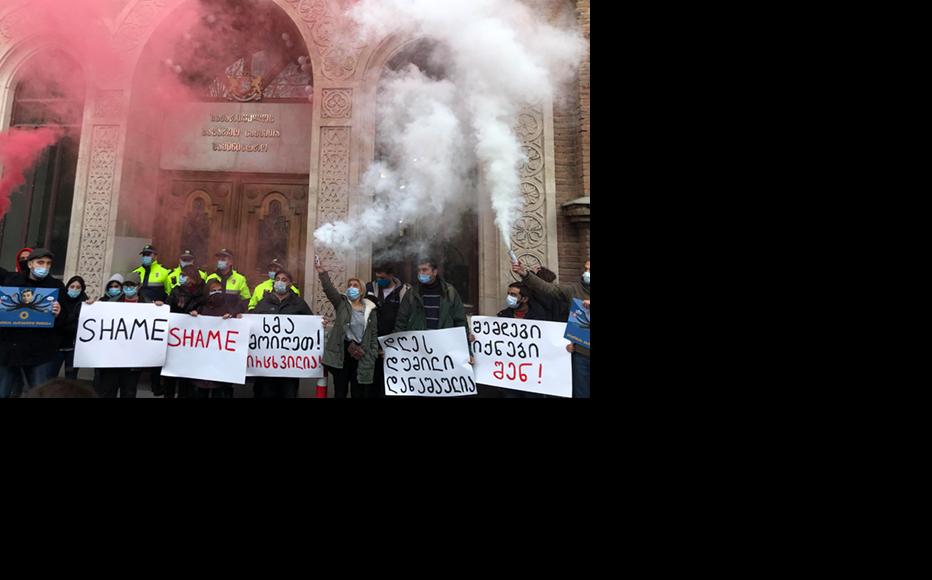 Activists gather in front of the MFA of Georgia to protest the arrest of cartographers Melashvili and Ilychova. (Photo: Anastasia Mgaloblishvili)
The link has been copied

Opposition parties in Georgia have accused the government of pursuing a politically motivated case against two cartographers charged with “violating” national interests in negotiations over a disputed part of the country’s border with Azerbaijan.

Iveri Melashvili and Natalia Ilychova, former employees of the Georgia-Azerbaijan commission attempting to resolve disputed parts of the border between the two countries, are accused of handing territory “to a foreign country”.

Having been refused bail, they are in pre-trial detention and face between ten and 15 years in prison for charges under Article 308 of the criminal code.

The charges are the latest development in a decades-long negotiation between Georgia and Azerbaijan over a disputed area of the border, part of which includes the historic David Gareji monastery complex.

Melashvili and Ilychova are accused of concealing a 1938 map during meetings of the demarcation-delimitation commission nearly 15 years ago. According to the prosecutor’s office, this cost Georgia 3,500 hectares of territory and parts of the David Gareji complex.

Defence minister Irakli Gharibashvili told TV Imedi that David Gareji had been given away “through traitor’s means”.

However, opposition parties assert that the case was fabricated to manipulate public sentiment ahead of the country’s 2020 elections, and deem the cartographers to be political prisoners.

“It is absolutely clear that this is a pre-election, dirty political game,” European Georgia’s Elene Khostaria told an opposition protest outside the prosecutor’s office on October 7, the day of the cartographers’ arrest.

Critics also question the timing of the investigation, launched in the midst of the Nagorny Karabakh conflict between Armenia and Azerbaijan, as well as Russia’s involvement, as the map was allegedly sourced from Moscow’s secret archives.

A coalition of 15 NGOs also released a statement calling the case “politically motivated”.

“It’s noteworthy to find out the reasons for the intensification of this issue during the hostilities in the region between neighboring Azerbaijan and Armenia,” the statement read. “It is a well-known fact that Russia’s interests have been to interfere in Georgia's elections and stir up destabilisation, including by trying to create tension between Georgia and Azerbaijan.”

Both of the defendants denied the allegations against them, with Melashvili insisting that the territory they are accused of giving away was never agreed upon by the commission.

Shota Ghvineria, Georgia’s former ambassador to the Netherlands and now a lecturer at the Baltic Defence College, said that the accusation was indeed absurd.

He said that, even if agreed on the commission level, no territory could be given away without the government’s official ratification.

“The border between Georgia and Azerbaijan has not been finalised since the geographical coordinates remain unagreed,” he said. “When this agreement happens on the expert level, then procedures will start on the government level and a final agreement between the two countries will be signed. Until then, talking about ‘conceding territory’ is absurd – no-one has conceded anything to anyone.”

He said that Bidzina Ivanishvili, founder of the ruling Georgian Dream party, had contacted him in September 2019 to ask him to source this particular map. Once it reached Georgia, the investigation began into the cartographers’ actions.

However, the defendants claim that the commission decided not to use the map since it was flawed and not the map that the two governments officially agreed to use in 1996.

“That map has the greatest technical flaw, the use of which is not appropriate,” Melashvili told RadioFreeEurope.  “What is most important is that it is not a legal document. What do you think, if the use of this map was possible, would we not have used it? If you speak to the other side [Azerbaijan] with groundless material, this means that you are a priori sacrificing the negotiations for failure.”

In 1996, the two sides agreed to use the 1938 1:500,000 scale map as a basis for further negotiations on the border. In a signed document, they also agreed that a larger-scale map could be used if work was needed on smaller details.

The cartographers claim that the large-scale maps they were using were based on the agreed 1938 map. The Prosecutor’s office replied that the commission did not have the original and doubted its accuracy.

As strategic energy partners with strong economic ties, Georgia and Azerbaijan have repeatedly said that they are committed to a peaceful resolution of the border dispute. However, a third of the territory remains unagreed upon.

Marika Didebulidze, an expert on Georgian art and culture, explained that the complex was particularly significant as the place where Christian monastic life was first introduced in the sixth century by St David, an Assyrian monk. All its icons and carvings were Georgian, she continued.

However, Azerbaijan claims the monastery is of Albanian origin. According to their narrative, the Albanian kingdom covered parts of present-day Azerbaijan from the first to the eighth century, adopting Christianity in the fourth century.

Consequently, according to Azerbaijan, David Gareji - and Christian sites in Nagorny Karabakh - derive from Caucasian Albanians rather than Armenians or Georgians.

In 2007, deputy foreign minister Khalaf Khalafov, referred to David Gareji as “home to Caucasian Albanians who are believed to be the earliest inhabitants of Azerbaijan”.

Ghvineria said that the case would damage further negotiations on the territory between Georgia and Azerbaijan.

“The 1938 map was a compromise between Georgia and Azerbaijan as strategic partners – we sacrifice a bit, you sacrifice a bit. Now by bringing back a map that you prefer, of course the next logical move is that the other side will bring back a map that they prefer. So the compromise has been ruined, and I am not sure that we will still be able to get back to the 1938 map. In my opinion, we’re in a worse position now and this was very damaging for the negotiations,” Ghvineria said.

“Why did Russia decide to help us in finalising the border with Azerbaijan to our benefit? This is absurd.”

Officials from Baku have yet to comment on the issue.

Giving Voice, Driving Change - from the Borderland to the Steppes
Georgia
Land, Opposition
Connect with us