Government backtracks on the timing of new tax rules after protests by small businesses.

Government backtracks on the timing of new tax rules after protests by small businesses. 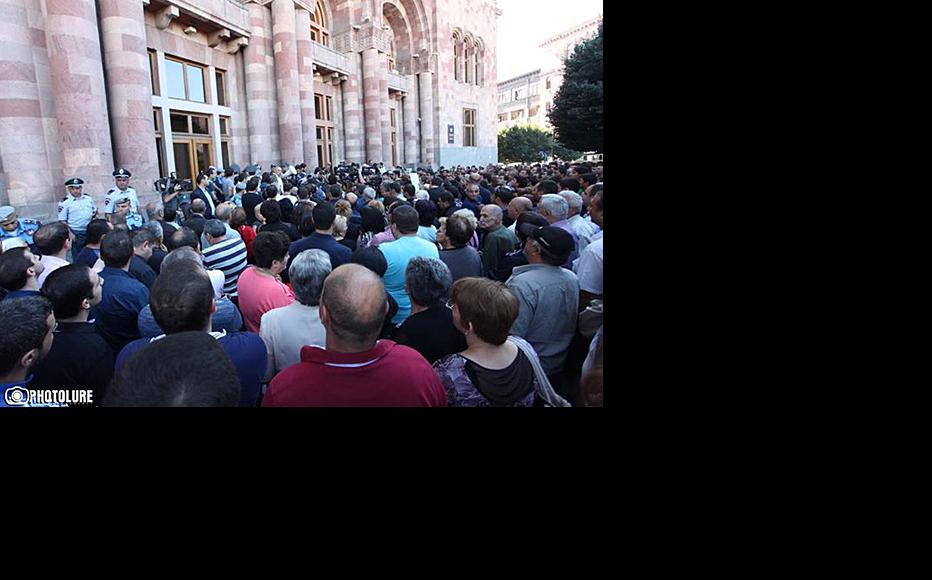 Business owners protest outside the government building in Yerevan, September 29. (Photo: Photolure agency).
The link has been copied

Across Armenia, shop owners are up in arms about a new business tax they say will ruin them. The government appears to have listened, and has promised to hold off on enforcing the changes, which came into effect on October 1, until next February while flaws in the process are sorted out.

At first sight, the Law on Turnover Tax should benefit small businesses as it reduces their taxation rate from 3.5 to one per cent. But the downside is that they will have to they were going to have to document and declare every commercial transaction, in particular purchases from their suppliers.

After meeting a delegation of small and medium-sized business owners on October 6, Prime Minister Hovik Abrahamyan instructed the finance ministry to draft a revised bill that would contain clearer regulations, provide more favourable conditions for small and medium-sized enterprises (SMEs), and postpone until February 1 one of the key requirements, concerning the filing of trade turnover documents. In the interim, SMEs will be taxed at the new, lower rate of one per cent.

The prime minister acknowledged that technical problems had arisen with forcing businesses to draw up a complete inventory of all their stock prior to the law coming into force.

Addressing parliament on October 2, Finance Minister Gagik Khachatryan said the aim was to make life easier for SME owners. He noted that international studies had shown that SMEs provided nine out of ten jobs in Armenia and contributed 60 per cent of its gross domestic product.

“The government is therefore has an interest in developing small and medium-sized businesses. I believe this [change] is even somewhat belated,” he said.

Noting that 90 per cent of tax-paying organisations filed declarations of under ten million drams (25,000 US dollars) a year, Khachatryan said. “I just want to reassure traders that after October 1, the taxation authorities won’t be taking any unnecessary action.”

Speaking before he blocked implementation of the new law, Prime Minister Abrahamyan said the strategy was to reduce the tax burden on SMEs and focus instead on getting big business to pay its dues.

“That’s our thinking, and I believe we’ll be successful if we do it in a consistent manner,” he added.

These assurances did nothing to soothe tempers among SME owners, whose principal concern was that in return for lower tax rates, they were going to have to account for and declare every transaction.

Protests broke out in a number of towns across Armenia, and business owners shut up shop to underscore their concerns.

Many said they would end up having to charge their customers higher prices, which could drive them to bankruptcy. Others voiced suspicions that the notionally uniform tax rate would in practice be applied differently to different sectors.

“They’re planning to carry out so many checks and demand so much documentation that it’s simply absurd for any independent businessperson,” said Gayane Poghosyan, who stayed away from her stall at Yerevan’s Malatiya Market to protest outside the government and parliament buildings. “And what comes of it? They’re harming us in order to make big business pay its taxes. Don’t they know who those big business owners are?”

Poghosyan said the law would kill off small business owners like her “who are just trying to feed our families”.

In Gyumri, 130 kilometres northwest of the capital, SME owners threatened to block a major highway to demand that the law be annulled.

“Instead of chasing the big importers, they’re going after people who sell sunflower seed and buns,” said local trader Vahram Mkrtchyan. “If I stop working, I won’t pay anything [in taxes] and that’s true of thousands of others. If we don’t pay anything at all, how will that be for the budget?”

Although now delayed, the law envisages a warning the first time a business owner fails to submit transaction accounts, then a 20,000 dram (50 dollar) fine, and finally an increased taxation rate of five per cent. The warning will disappear next year and the fine in 2016, so that offenders will immediately be taxed at the higher rate.

Economist Mikael Melkumyan, who represents the opposition Prosperous Armenia in parliament, sees the changes as punitive for SMEs.

“We aren’t against reducing the size of the shadow economy, we are in favour of doing that – but not by these means,” he told IWPR.

Melkumyan said official statistics showed that of the 19,000 small businesses recorded in 2010, exactly half had since closed down.

“This law creates a harsher taxation policy, and it will result in 5,000 to 6,000 businesspeople going bankrupt,” he said.