The Taste of Olive Oil and Thyme in Syria

A flavour from home brings a much-needed moment of comfort.

The Taste of Olive Oil and Thyme in Syria

A flavour from home brings a much-needed moment of comfort. 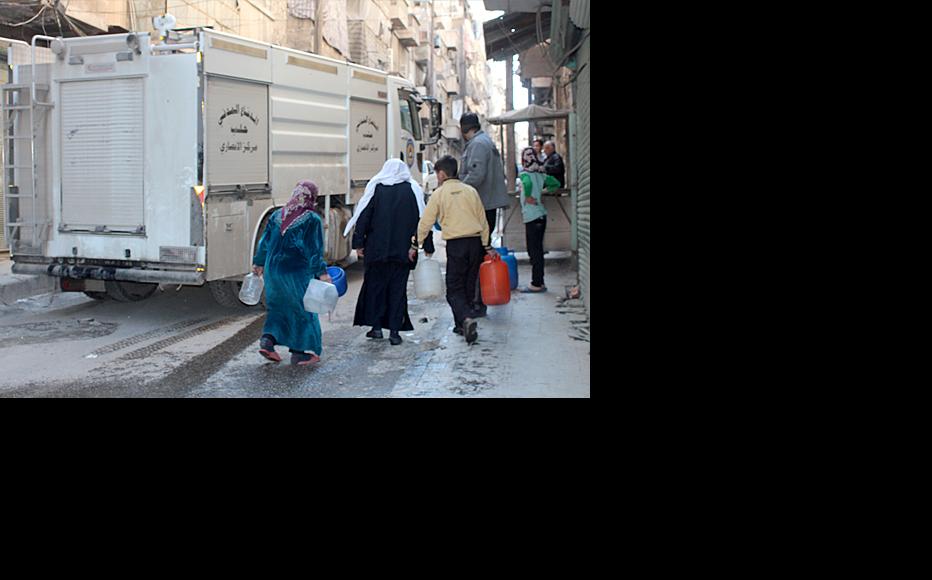 An elderly woman chases after a fire engine to get water as the Amiriya neighbourhood of Aleppo is cut off. (Photo: Damascus Bureau)
The link has been copied

It was a long night of tension and fear. We spent it in darkness, hiding with other residents of our neighbourhood as a storm of shelling and explosions raged around us.

A woman sat wailing and screaming in the corner of the house. Her leg had been hit by shrapnel from a projectile that had landed close to our house. The men could do nothing to ease her pain. There was no way to take her to receive the medical care she needed because of the random shelling and the many snipers positioned on the rooftops around us.

Umm Hussam, my mother in-law, was always prepared for such predicaments. She kept a first aid kit with her at all times. She approached the woman, calmed her down and began cleaning and stitching up her wound, even though she had never done such a procedure before. With luck, that poor woman would then be able to rest.

Finally, morning came and the bombardment eased off enough to allow us to get out of the city and head for safety. But our mother-in-law refused to leave immediately, in spite of the dangers all around. Instead, she went to collect some food rations she had stockpiled at home to ensure her husband and children did not go hungry. She never once thought of herself and the risk she was putting herself at by standing in the kitchen, exposed to snipers watching for any movement.

Although her children were pleading with her to leave the kitchen and get into the car, she reassured them that she would be fine. Umm Hussam only emerged once she had found enough food to sustain her extended family for at least ten days.

At first, we did not realise the importance of what she had done. At that moment, we did not think the food was necessary. Carrying everything that Umm Hussam had brought for us, we rushed out of the house and made our way out of the city, until by the grace of God we found refuge.

This house was safe, but it was nothing like our home. There were no internal doors, nothing to divide the men from the women or allow a family of a dozen adults and children some privacy or quiet.

In one corner, I found a piece of blue fabric which turned out to be an old tent left behind by the owner of the house. My delight at finding somewhere more private to sleep was short-lived, as the landlady returned to retrieve the tent. It was not part of the furniture she had rented to us.

By nightfall, we were all very hungry. There was no electricity and it was impossible for anyone to leave the house to find food. Only then did we realise the importance of the supplies that we left the house with. We finally understood how wise Umm Hussam had been. Our mother-in-law had risked her life to salvage things for difficult times like these.

Two months after we were displaced, Umm Hussam died. May your soul rest in peace, our mother-in-law Umm Hussam.

Speaking Out: Women's Voices from Syria
Syria
Conflict, Refugees
Connect with us