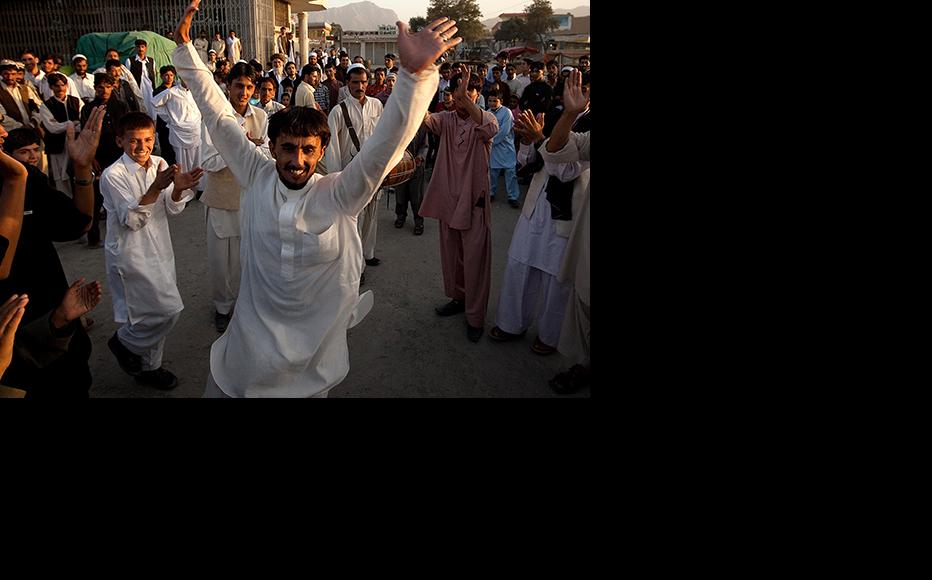 Afghan men dance on the streets of Kabul celebrating the first day of Eid-al-Fitr. (Photo: Paula Bronstein/Getty Images)
The link has been copied

Last year Ramazan, a 60-year-old drummer, was returning from performing at a wedding one evening when his band was stopped by Taleban fighters.

“The Taleban attacked us, beat us and threatened to behead us if we continued singing,” he told IWPR.

“They broke my drum and my table [a traditional percussion instrument], which were my only means of making a living. I used to play them at various ceremonies and parties to entertain and cheer people up but I haven’t sung at a single party since.”

Ramazan, originally from Dowlat Shah district, around 50 miles from the provincial capital Mehterlam, said that his whole life had changed as a result of that evening.

“I’ve given [music] up and now I’m a cobbler in Mehterlam city, so that I can feed my children,” he said. “I still love music but I can’t face these security issues.”

Musicians in the eastern Afghan province of Laghman are warning of a Taleban clampdown, with the insurgents issuing frequent death threats  to performers for not  conforming to their strict interpretation of Islam.

Afghanistan has a rich musical heritage which stems from a diverse range of ethnic, religious, and linguistic influences. Musical styles vary enormously and can range from classical Indian compositions to a more traditional folk sound with melodic vocals accompanied by tabla and long-necked lutes.

During Taleban rule between 1996 and 2001, music was all but banned across large swathes of the country. Only certain types of religious song were tolerated and many musicians left to live in Pakistan or Iran.

Now, with insurgents reinstating their dominance over broad areas of Afghanistan, this suppression of music appears to be returning.

Sher Jan Gharwal, originally from Ara in Laghman Alishang district, told IWPR he had abandoned his music business to move to Jalalabad in Nangarhar.

The 60-year-old said that growing Taleban influence had effectively shut down the province’s music industry. Musicians he knew were leaving to avoid the reach of the insurgency.

“I can’t continue singing in Laghman anymore because of the number of different armed insurgent groups in many areas, including Alishang district,” Gharwal said. “These men are the enemies of music and of singers.”

Rizwan Manawar, head of the Singers’ Association in Jalalabad, argued that the government needed to do more to protect the interests of musicians.

“Many singers and musicians are unable to work outside of the cities for fear of violence,” he said. “And within cities there often aren’t enough weddings or other celebrations to ensure everyone can work.

“The ministry of information and culture does pay a low monthly salary to a few well-known, established musicians, but others don’t receive anything.

“Now many of our singers have had to become manual labourers.”

“We don’t have a large enough budget to pay Laghman’s singers a salary, but if central government wants to preserve our musical heritage then it should approve a special budget to assist our musicians,” he said.

Azam Gul used to be a sought-after singer in Laghman. He told IWPR that he had been forced to stop performing and had instead started a business selling kitchenware.

Widespread fear of Taleban reprisals meant few people now risked performing, he said, adding, “We used to entertain people at wedding ceremonies with our singing and people respected us for it.

“Now though, because of their fear and the threats from Taleban, people in the districts don’t play anymore. I had to build this shop in order to feed my children but I don’t earn anything beyond what serves to put food on the table.”

The ban also extends beyond live music. Ajmal, 40, who regularly drives between Laghman and Nangarhar, said he now turned off his car radio when heading towards an area of Laghman known as Surkhakano.

“Once, when I was travelling to Laghman at night a group of gunman appeared in the road,” he said. “I thought they were bandits as they stopped me but instead they broke my car’s radio with the butt of one of their guns and then started beating me.

“They warned me not to play the radio or CDs in my car anymore.”

He said, “In the past we played music at full volume here because our guests enjoyed it. Now though it’s different - I don’t play songs anymore.”

IWPR also found that the number of shops in Laghman selling CDs and cassettes appeared to have reduced in recent months.

Asad Khan, a shopkeeper in Mehterlam, said that a friend who sold music had his shop targeted in an IED attack.

“I feel very frightened and I fear that someone might blow up my shop in the future,” he said. “We don’t earn much money selling CDs or cassettes now as people don’t show much interest in buying them. The Taleban have banned people from listening to music.”

Other locals said that they now only organised musical performances and parties in secret to avoid repercussions.

One Laghman resident, Sher Ali, described posting friends as guards outside a wedding venue to warn of any approaching Taleban fighters.

“During my cousin’s wedding night we assigned four people to patrol the local area so that Taleban wouldn’t come to our house. We played music in secret down in the basement,” he said.

Shafeullah, a spokesman for the Laghman police, said that the authorities were doing their best to protect the security of all residents, including musicians.

He urged people not to “fear the enemy” as the Taleban would then become “more courageous”.

“If any singers are threatened they should inform us and we will do our best to help them,” he said.

Not all religious authorities agree with the Taleban’s categorization of music as sinful.

Mawlawi Hanifi, an imam of a Mehterlam mosque, said that he believed music should be encouraged provided it spread a positive message.

“If singers deliver good messages to people through their music then religious scholars will support them,” he said. “But music which spreads and promotes immorality and vulgarity should be banned.

“Equally, those against music should be asking themselves why they’re not also speaking out just as strongly against murder and suicide attacks.”