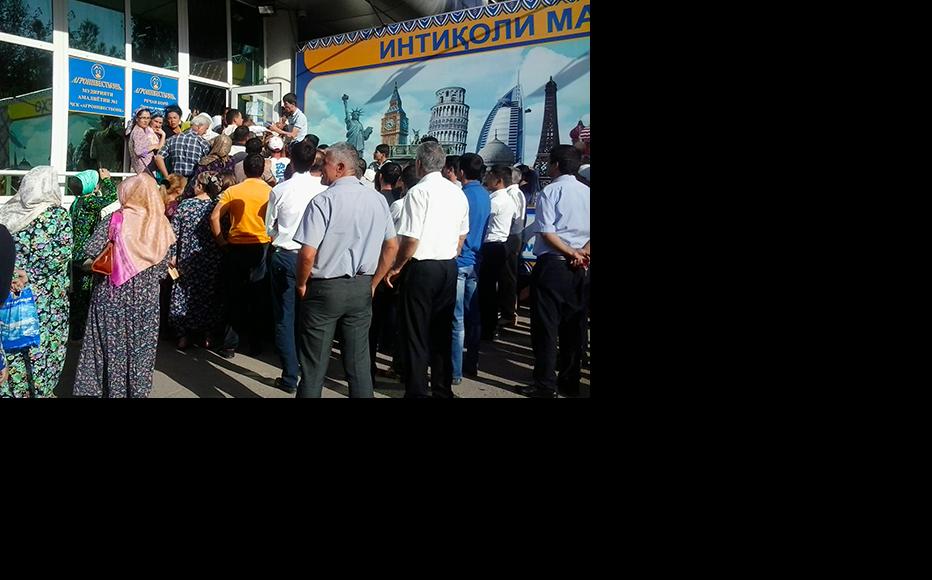 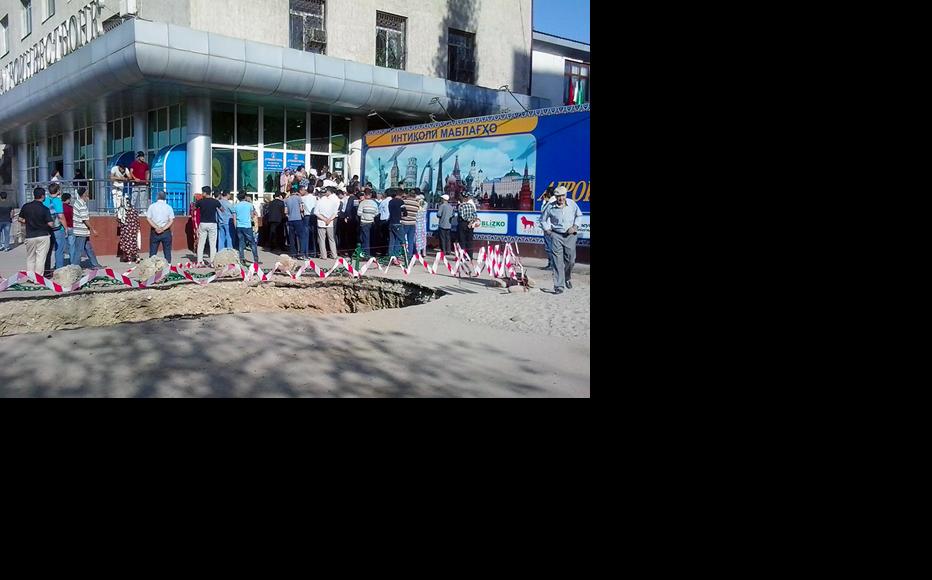 Customers need to wait for hours to withdraw money. (Photo: Jamila Majidova/IWPR)
The link has been copied

Firuza is queuing outside her bank’s headquarters in Dushanbe. The 38-year-old must come to the crowded, noisy Agroinvestbonk office several mornings in a row every month to withdraw her 64-year-old father’s salary.

“Currently I am not employed. My father [a school teacher] is the only bread-winner in our family,” Firuza said. “He was supposed to retire a long time ago, but he has to work to feed my three kids.”

Agroinvestbonk is one of several Tajik banks that have frozen their retail banking and international money transfer operations. Clients like Firuza are only able to withdraw 500 somoni a day (50 US dollars) from the bank’s main headquarters in Dushanbe. Some have to travel from far-away regions to the capital.

Quite often those who are queuing are told there is no money left by 9 am and must return the next day.

Firuza says she has been lucky enough to be able to convince a local shopkeeper to let her have food on credit. Others have not been so fortunate.

Four out of Tajikistan’s 18 financial institutions have fallen victim to what economists deem to be a liquidity crisis.

As well as at Agroinvestbonk - the largest state-controlled bank in the country - personal and business account holders at the private Tojiksodirotbonk, Fononbonk and Tajprombonk banks have been unable to withdraw money from their accounts since spring.

Remittances from migrant workers have long been a central part of the Tajik economy. In 2013, Tajiks sent home 3.9 billion dollars, amounting to 45 per cent of the country’s entire GDP of 8.5 billion dollars.

The vast majority of these migrants - 1.1 million  - were based in Russia.

The Russian economy has been hard hit by international sanctions and the consequent fall of the ruble in December 2014.

This has also severely affected workers from Central Asia. Many were forced to return home.

Konstantin Bondarenko, an economist who chairs the Free Market Centre of Tajikistan think tank in Dushanbe, told IWPR that the country’s economy was over-dependent on its main export asset – its labour force.

The most recent statistics from the Russian Central Bank suggest that Tajik nationals sent 828 million dollars home in the first half of 2016.

Prices for its key exports of cotton and aluminum have also fallen and GDP growth has dropped to three per cent, the lowest for nearly 20 years. Meanwhile, the somoni has fallen 40 per cent against the dollar since the beginning of 2014 and the banking sector has been hard hit by customers defaulting on loans.

The World Bank and IMF have judged that the Russian ruble will remain weak until at least the end of 2017.

Dushanbe-based banking expert Bakhrom Sharipov said that this meant that the current Tajik crisis was unlikely to improve before mid-2018.

Both Bondarenko and Sharipov stressed that this was not the first time the Tajik economy had been gravely affected by external factors.

This is not the first time Tajikistan has struggled with falling remittances. A major Russian financial crisis in 2008 also led to mass job losses.

And despite the fall in remittances, Tajik companies as well as individual citizens have continued to deposit their assets in banks.

Jamshed Nurmuhammadzoda, head of the Tajik National Bank, told reporters on December 1 that 9.5 billion somoni (1.2 billion dollars) had been deposited in local banks this year.

Bondarenko said that the current liquidity problem was the result of a wider crisis, provoked by ineffective management of the banking system.

“Starting from the 2008-2009 crisis, [Tajik] bank assets were growing, while liquidity was decreasing. Despite the capital volume growth… some financial indicators of the bank system, for example, returns on assets and returns on capital, have tended to decrease for the last several years,” he said.

The Tajik construction industry experienced a boom in recent years, with many people eagerly investing in new homes.

But after remittances fell in 2014 and clients were unable to repay their loans, the banks found themselves short of cash. Dushanbe’s city centre is full of half-finished lavish multi-storey buildings, projects that relied on bank investment.

Experts insist that the management of the entire system, including the National Bank’s regulative policy, needs to be overhauled. The state needs to free up restrictions on the foreign exchange market even as it strengthens its supervision of the banking sector.

Bondarenko said that the government’s previous interventions had backfired.

“Often, the state compensated for the lack of its own investments by relying on the bank system resources, in a ‘voluntarily-forced’ manner [when banks can’t turn down the state offer], by involving them in various investment projects,” he explained.

In 2015, the somoni’s exchange rate with the dollar plunged by 31.7 per cent. The National Bank of Tajikistan disposed of a significant amount of cash to keep the somoni stable.

The authorities say they will struggle to solve the current economic crisis due to a lack of state resources.

Tajik officials have turned to international agencies for help in the hope they will support the faltering economy.

But Bondarenko said that borrowing from international donors would not be effective in the long run.

“There will be the periods of relative stability, but external factors such as the Russian economy may worsen the situation again,” Bondarenko said.

Instead, the economist said the Tajik state must open its banking sector to foreign capital.

Bondarenko acknowledged that some local banks would be unable to withstand competition from foreign counterparts, but said that public interest trumped such concerns.

“If foreign banks are allowed to access the Tajik market, [they’ll bring in] significant capital and effective management,” he said. “Besides, they are more sustainable.”

Tajikistan
Economy
Connect with us