People complain that state restrictions on extravagant celebrations don’t apply to the great and good.

People complain that state restrictions on extravagant celebrations don’t apply to the great and good. 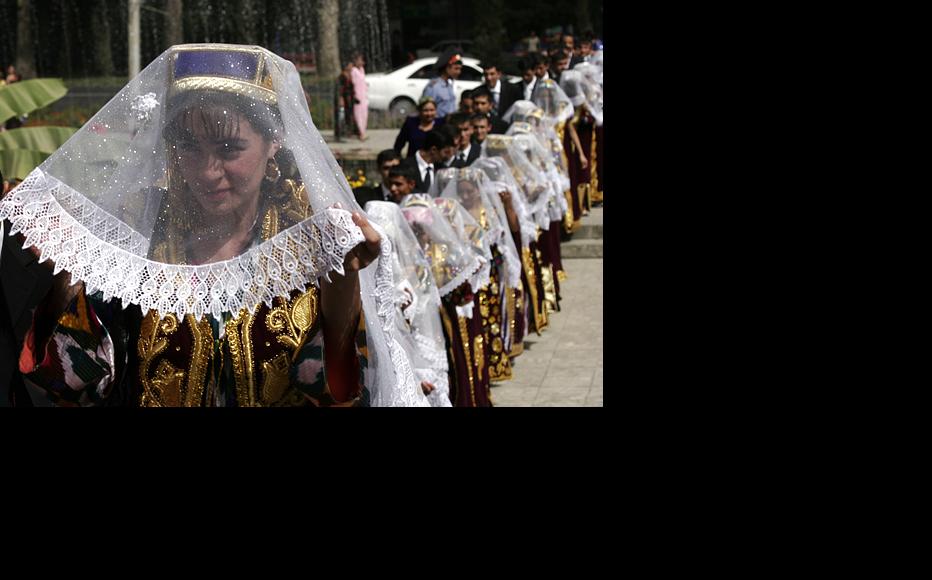 A wedding in Tajikistan. (Photo: IWPR)
The link has been copied

Dushanbe resident Firdaus Nozimov says his wedding this July was ruined by government inspectors who handed him a hefty fine. His crime? Providing his guests with “too much rice”.

The 29-year-old had fallen victim to a 2007 law designed to restrain the lavish celebrations that Tajiks like to hold around landmark events such as weddings, funerals and the birth of a child. Sometimes families run up huge debts that will take years to pay off.

The regulations dictate that not only must anyone planning a wedding obtain a permit, but they must restrict the partying to two days, limit guest numbers to 150, and use no more than four cars. Only one course can be served at the wedding meal, and the amount of food used must only be enough for 200 people.

Nozimov said he did have an official permit for his wedding reception, but the inspectors who turned up still imposed an 800 US dollar fine for cooking too much rice for the feast.

“We prepared food for 60 people… but they argued that there were more guests than that,” Nozimov said, explaining that it was hard to control numbers at Tajik weddings as relatives or friends often turned up uninvited. “They’ll be there at the door – you can’t just turn them away.”

Umed Habibov, who lives in Qurghonteppa, a city in southern Tajikistan, recalled how at a friend’s wedding in the village of Sabzavot this August, he spotted one guest behaving in an unusual way.

“He came, sat down at the table and ate like a guest, but then he made a call and I realised that he was someone from a government agency,” Habibov said.

After that phone call, the celebrations came to a swift end. Police arrived and arrested several relatives of the newlyweds, only releasing them after they paid up.

Habibov said his friend had to hand over 400 dollars for failing to obtain a permit for the wedding party, and smaller sums for using more cars than permitted and for exceeding the number of courses allowed for the reception.

He added that the outcome would have been worse if the bridegroom had not used family connections to get out of paying even stiffer fines.

Aside from the intrusion into their personal lives, many people resent the fact that government officials and the well-to-do appear to be exempt for the big-spending ban.

Haramgul Qodirova, a journalist from Dushanbe, said that officials and wealthy people spent considerably more money on festivities than ordinary people, but she said she could not recall any case where such individuals had been prosecuted.

She told IWPR that last summer, a high-ranking government official held a three-day wedding party in the town of Hamadoni in southern Tajikistan, with no repercussions.

Another Dushanbe resident, who gave his name as Shohin, recalled a wedding which a relative, who happened to be a government employee, had arranged for one of his children.

“The reception lasted for a long time, exceeding the three hours prescribed by law, and there were more than 300 guests. But no one stopped the wedding,” Shohin said.

Shavkat Rajabov from Khujand, the administrative centre of the northern Soghd region, said he personally was against ostentatious celebrations, but the government had no right to stop people from following traditions that had been passed down through generations.

“The people who came up with the law should observe it in the first instance,” Rajabov said.

Said, a wedding photographer who often attends marriages organised by high-ranking officials, confirmed that such lavish celebrations were not visited by inspectors.

“They never have problems,” he said. “Maybe they know whom to pay to get off the hook.”

Since the legislation was introduced seven years ago, more than 1,800 people have been prosecuted and fined a total of more than one million dollars.

According to officials from the Committee for Religious Affairs, whose mandate includes “regulating traditions, rituals and celebrations”, 340 people were fined in the first six months of this year alone.

The committee argues that placing a legal maximum on spending helps low-income families who would otherwise have been forced into debt.

Afshin Muqim, a representative of the committee, said fines were mostly imposed for exceeding the set number of guests and vehicles, and running over the three-hour limit for the reception.

Some celebrations linked to traditional wedding practices have been banned outright. These include “sandukbaron”, where the bride’s dowry is displayed, “qudotalabon”, when the newlywed’s parents get together, and “choygashtak-i dukhtaron”, a party for the bride’s girlfriends.

Sociologist Bobojani Qayum said the central importance of wedding celebrations in Tajik culture made it difficult for people to accept restrictions.

Qayum said measures to curb lavish spending should be introduced gradually, because “people don’t want to forget their traditions”.

He noted that while some people were wealthy enough to bribe inspectors to stay away, “others lack the funds to do so and end up breaching the regulations”.

“This legislation opened up another channel for corruption,” he said. “That’s what the authorities should be tackling.”

Boytur Toirov, a staff member of the religious affairs committee, denied that officials and affluent people were treated any differently from ordinary citizens.

“Everyone is equal before the law. Anyone who violates the law, regardless who he is, will be held responsible. It does not matter whether he is rich or poor.”

Some experts argue that the law runs contrary to rights and freedoms enshrined in Tajikistan’s constitution. Lawyer Shavkatjon Sharipov believes that this entitles people to defy the law and argue their case in court.

Faizinisso Vohidova, also a lawyer, said people should be free to spend their money however they wished without the government interfering in their private lives.

But Azizullo Mirzozada, the deputy head of the religious affairs committee, argued that the law aimed not only to curb ruinous spending, but also to encourage a culture of more modest celebration.

Tajikistan
Rule of Law
Connect with us