Poor grasp of Russian leaves younger migrants unable to fend for themselves.

Poor grasp of Russian leaves younger migrants unable to fend for themselves. 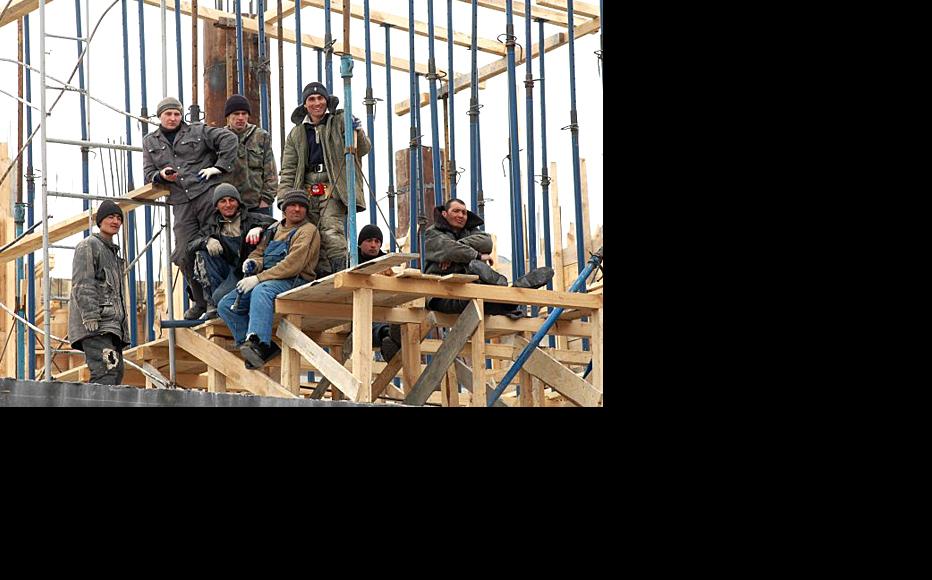 Tajik workers on a Moscow building site. (Photo: Kirill Kuzmin)
The link has been copied

After four years living in Russia, Parviz should be able to speak the language well enough. But when IWPR met him before he got on a flight from Tajikistan back to the Volga city of Saratov, he quickly lapsed into his own language, Tajik.

Parviz, 20, explained that although he understood quite a lot of Russian, he rarely spoke it as he mostly mixed with other expats from Tajikistan living in Saratov.

Originally from a remote village in the eastern Rasht region of Tajikistan, Parviz went to Russia when he was 16 and worked alongside his uncle, first as staff in a café, and later opening their own bakery.

He is one of a new generation of migrants who have grown up in post-Soviet Tajikistan, where Russian has steadily been phased out of schools and public life. The changing pattern is a real hindrance to the many thousands of younger Tajiks who go abroad to work, mainly to Russia but also to Kazakstan – both countries where Russian remains an essential lingua franca for immigrant communities.

Tolibjon Sharipov, a departmental head in Tajikistan’s Migration Service, says the language barrier differentiates the younger generation from those educated in the Soviet system.

“They can’t integrate. They can’t read newspapers or watch TV,” he said, adding that this tends to make them look inward to their own migrant community.

Rahmonsho, 23, has lived in Chelyabinsk since he was 15, and describes how hard it was at the start.

“I remember a time when I couldn’t understand a thing and I was unable to communicate with the locals. It felt like I was living on a desert island. I only mixed with my relatives, with my own,” he said, adding that he is now fluent in Russian.

Poor knowledge of Russian is one of a number of factors that limits employment opportunities and makes it harder for them to adapt to life in Russia.

Russian officials put the number of Tajik labour migrants at 1.1 million. Some return to Tajikistan every year after the warmer months are over and manual work dries up, while some stay on and may settle down permanently.

As Rahmansho noted, going back to Tajikistan for good is not really an option. “Of course I’d like to live in my own country, but there’s no work there, and life is terrible in our village; there’s no electricity over the winter,” he said.

Sociologist Firuz Saidov says the first waves of migration consisted of people fleeing civil war in the first half of the 1990s, and the desperate economic conditions that persisted afterwards.

“Those people had a good knowledge of Russian, enough to allow them to get a job, communicate, adapt and integrate,” said Nurzida Bensgier, who heads the Interethnic Information Centre for Russia’s Sverdlovsk region.

Bensgier says the average age of Tajik seasonal worker is 25, ten years younger than those who came in the 1990s. Three-quarters of them come from rural areas where Russian has always been used on a more limited basis, even in Soviet times. Their childhood coincided with the 1992-97 civil war, which disrupted access to education. Many left school early to become breadwinners for their families.

“What marks out the current migrants above all else is their complete ignorance of Russian. That forces them to go to middlemen and hand over not only their papers but their complete fate to them,” she said.

All in all, the younger migrants are singularly unprepared for living and working abroad, according to Bakhtiyor Sattori, a political analyst and formerly Moscow spokesman for the Tajik Migration Service.

“Today’s migrant is an inexperienced, naive youngster who is plunged into the hectic whirl of city life, with all its temptations, dangers, deception and harsh realities, without empathy or help from others,” Sattori said.

That view is shared by Anatoly Fomenko, deputy head of the Russian Federal Migration Service, who told the RIA Novosti news agency that migrant workers’ ignorance of Russian laws and social norms tended to lead to “violations of the migrant’s own rights, criminalisation of migration, the creation of a labour black market, xenophobia and even ethnic conflict.”

As Sharipov explained, the young and unexperienced are liable to be duped even before they leave the country.

As a result of Dushanbe and Moscow tightening up procedures and clamping down on “illegals”, arriving migrants need to register with the Russian authorities and obtain a work permit. But as Sharipov explained, “The migrants don’t know any of this. They only know what they are told by some relative or middleman…. They place their trust in middlemen who provide them with fake documents, which later leads to them being deported.”

The teaching and use of Russian has been in steady decline in Tajikistan since the 1990s. Many ethnic Russians left the country, and measures like a 2009 law on language reduced the scope for using Russian in various areas of public life.

These days, Sharipov said, “There are virtually no teachers of Russian left. They’ve been replaced by staff who teach other subjects, and who have a poor command of Russian.”

In December, Moscow introduced language testing for immigrants working in retail or the service sector. Those educated in Soviet  times are exempt.

Migration service official Fomenko said that as of April 2013, only 7,000 test certificates had been issued – a tiny number given that there are about five million migrants in Russia, mainly from Central Asia and the south Caucasus.

In a recent interview with Interfax news agency, Tatyana Badzhan, who heads the Russian Migration Service department that encourages integration, expressed regret at the lack of preparation availavle to migrants in their countries of origin. They should be able to attend language classes and courses to improve their skills before they set off for Russia, she said.

Sharipov acknowledged the problem, saying it was high time Tajikistan established centres that would provide the kind of training Badzhan was talking about.

He said the Tajik education ministry was trying to address poor standard of Russian teaching, but noted that as an institution, it did not focus on the particular vocational needs of future migrant workers.

“We have to admit that our young people are not well-prepared for labour migration,” he said, adding that meant young Tajiks were likely to end up in menial jobs paying low wages but carrying a higher risk of work-related injury.