Damascus activist speaks of her life on the run from the regime and describes the crackdown on protesters.

Damascus activist speaks of her life on the run from the regime and describes the crackdown on protesters. 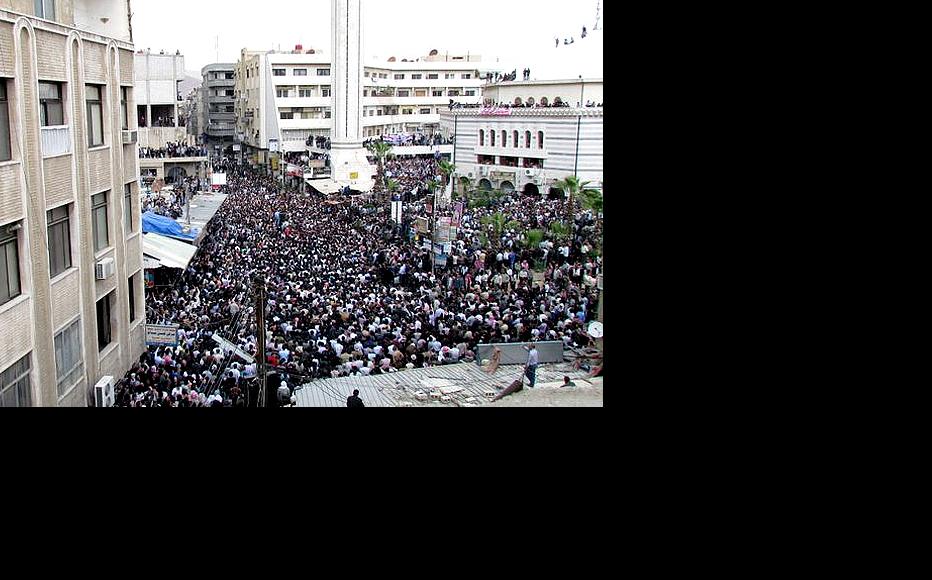 Protests in Damascus. (Photo: Syriana2011/Flickr)
The link has been copied

Razan Zeitouneh is a 34-year-old human rights lawyer who has gone into hiding after being accused by the government of being a foreign agent. She talks to IWPR about her current circumstances and the protests still sweeping her country.

You are a respected Damascus lawyer. And yet you are wanted by the Syrian secret police. Why?

The wanted list is very long these days; many of my friends have been arrested or are in hiding like me. The regime is arresting activists, but also ordinary people in large numbers. Many are tortured to break their spirits. The “ordinary” prisoners are released, so they tell of their fate and spread fear. Those with a leading role in the protests remain in custody.

When did you go into hiding?

On March 23, after the massacre at the Omari mosque in Dera’a, to which protesters had retreated. That day security forces surrounded the mosque and brutally attacked it. I gathered information from Dera’a and passed it on to international media. Subsequently, Syrian state television defamed me as a foreign agent. So I knew they would come to get me soon. I gathered the most necessary things and left my apartment.

What about your family? Are they also being threatened?

About two weeks ago, intelligence officers came to my husband’s workplace. They wanted to arrest him, but luckily he happened not to be there. So he went into hiding as well. Later, security forces forcibly entered our apartment. Unfortunately, my brother-in-law was there, 20-year-old Abdul Rahman, and they took him in instead of my husband. Since then we have not heard from him.

So you are the run in your own country. How do you manage everyday life?

I only go out for the most urgent errands. Once I did not see the sun for three weeks. But then I could not resist and went to a demo in Douma, near Damascus. After all, I went into hiding to continue with my work, not to give up.

How do you obtain information about what is going on in the country while in hiding?

I have been working as a human rights lawyer for many years and defended many political prisoners and know most of the activists. I have a good network across the country.

The situation appears to be most dramatic in Dera’a where the protests began. Can you briefly describe the situation there?

The situation in Dera’a is devastating. After the city was bombed and shelled, it was sealed off for days by the security forces. There is no electricity, no drinking water - the water tanks on the buildings were deliberately fired upon and destroyed. There is almost no food, no milk for the children. In recent days, hundreds were arrested and herded into the football stadium in the city. Dead bodies are lying in the streets because the security forces do not allow people to bury their dead. Some bodies were simply dumped on vegetable carts. It is a tragedy.

Why are the people not allowed to bury their dead?

Apparently, the regime wants to prevent funerals because they lead to new protests. But I honestly think it's just in order to humiliate the people.

Do you think that a tragedy like in Hama in 1982, when late president Hafiz al-Assad bulldozed an entire city, and probably more than 10,000 people were killed, could be repeated in today's Syria?

No, I do not think so. Despite all the crimes being committed by the regime these days Hama will not be repeated. Today, the whole world is watching, no matter how much the regime tries to shut out the media. The other day there was even a live stream from a demonstration in Banyas on the internet.

How many people have been killed since the beginning of the protests?

We estimate about 600 civilians. But we still are missing many names from Dera’a, so the figure is only an approximation. Among the dead were several children who were “inadvertently” killed by the security forces.

But despite the real danger to life, the protests continue.

The protest movement is growing every day. The people are not afraid anymore, not even of tanks and guns. That makes me optimistic, even if no one knows exactly what to do next. You know, at first the Syrians were certainly inspired by the events in Tunisia and Egypt. But the real reasons for the protests ran deeper. People chanted, “The Syrian people want to live in dignity.” The driving force was the desire for a life free of humiliation from which we have been suffering for decades. From the outside, it is perhaps difficult to understand how painful it is to live year after year without dignity, not to be treated as a human being but simply as a subject.

You cannot compare the numbers with Tunisia and Egypt. But at the same time no other country has a security apparatus that would be comparable to Syria. I think my people have shown incredible courage in facing this. What worries us is the bourgeoisie, the commercial middle class. Many merchants are afraid of change. Aleppo, for example, apart from a few small demonstrations, remained peaceful so far.

There are virtually no independent journalists in Syria - which makes it easy to spread rumours. The regime insists that forces from abroad, for example from neighbouring Lebanon, foment the unrest with money and weapons. Can you be sure that there is no such foreign interference?

The Syrian regime is waging a war against its own people - with weapons and in the media. But those allegations have little substance. Why else would they change every day: one day they blame the Saudi prince Bandar Ben Sultan, the next day the former Lebanese prime minister Saad Hariri, then Syria's former vice- president, then the Muslim Brothers ... only the Syrian people seem to have nothing to do with the protests.

So it's really a people's movement?

Without doubt. It is a rebellion of ordinary people, of women, fathers, sons, and daughters. Among the arrested were housewives and grandmothers as well.

In the beginning, many thought Bashar al-Assad was a hesitant but willing reformer. This image has been thoroughly destroyed. Can the president survive politically?

It's not just about the president - it's about an entire system that has been controlling the country for decades. One cannot really reform a regime that is based on corruption and oppression. No matter what the regime does now in order to survive, it may perhaps delay its end but it cannot prevent it.

There were some reforms: the lifting of the state of emergency; granting citizenship to stateless Kurds; and the abolishment of the notorious special security courts. Are these essential steps or just cosmetic?

These steps don’t mean anything because they came after dozens of people were killed and hundreds arrested. They also were not really implemented - they are paper decisions to mislead the media and the international community.

Is there anything Assad can do to calm down the situation?

He can dissolve the complex security apparatus and bring those responsible for torture and murder to justice. He can apologise for his speech on April 16 to the Syrian people and convene a national conference to prepare for a democratic, peaceful change.

Many fear that a fall of the regime could lead to civil war and to riots against religious minorities.

The Syrian people have in the past few weeks shown the world how peaceful and civilised they are. All the protesters insist on national unity and reject sectarian speeches. Despite massive military force on the part of the regime, the people remained peaceful. In my opinion, this is proof that the Syrians, if they get the chance, will transform their land peacefully.

What can the West do to prevent more bloodshed in Syria?

The Syrians do not need any military intervention. We need political and diplomatic pressure on the regime to stop the violence against the people. We Syrians have regained faith in ourselves. We can take our future in our own hands.

This interview originally appeared in German in the Die Zeit weekly.

The Arab Spring
Syria
Regime
Connect with us