Syria: My Son, My Protector

A mother forges a strong relationship with her son in the face of divisive family politics.

Syria: My Son, My Protector

A mother forges a strong relationship with her son in the face of divisive family politics. 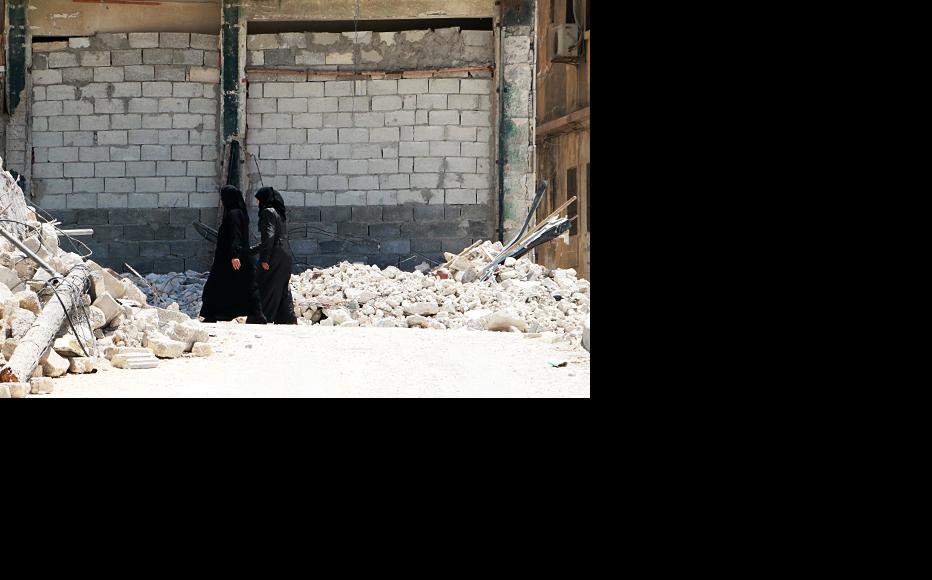 Women walk among the rubble of al-Maadi neighbourhood, Aleppo. (Photo: Baraa al-Halabi)
The link has been copied

I will never forget how the day that changed my life unfolded.

My husband and son had been involved in a car accident and had been taken to Al-Kindi hospital.

I rushed to the hospital, talking to myself the whole while. “It isn’t serious. I’m sure they aren’t seriously injured. Why would they be? Oh God! What has happened to them?”

Once there, I ran to the emergency room where I found my eight-year-old son lying on a stretcher. His face had swollen up considerably and both his arms were broken. His left leg was injured so badly that I could see the bone, and his right thighbone was also broken.

“Where is my husband?” I asked.

He was undergoing surgery. An hour passed, then another, then three, I heard someone walk out of the operating theatre and say, “I’m sorry for your loss.”

I convinced myself I had misheard. I behaved selfishly, and told those who were with me that someone else had died, not my husband. I tried to go into the operating theatre but my family wouldn’t allow it. They convinced me to focus on my son and take him somewhere he could get better treatment.

I accompanied my son to another hospital, where they treated his injuries and gave him painkillers, and he drifted off to sleep.

I was sitting at his bedside with my mother and father when a relative of mine walked in and said to me, “I’m sorry for your loss, may his soul rest in peace.”

The truth hit me – my husband was dead, and I would have to raise my injured son and pre-school daughter alone.

For the next ten days. I was hysterical, struggling to understand the concept of death. God had destined this to happen, but why do people die? Is the death of a good person fair?

Many things in my life became difficult after my husband died. Both my parents and my in-laws had strong opinions about social convention, and they began imposing their beliefs on me. I was told to observe “iddah”, four months of mourning during which I couldn’t leave my house so that men wouldn’t see me. I was told to wear hijab. I was told not to laugh.

My first act of rebellion came a month after the accident. I was sitting in my room with a group of women who were offering their condolences, when I heard my son scream, “Mummy, I can’t bear it!” A doctor and a nurse were changing his bandages, and he was in pain.

I stopped thinking and ran into the ward room to hug him. I didn’t care that there was a male doctor in the room.

My parents were shocked, but I was determined to do what was best for my children, and they’d have to get used to it. It was my right to set the course of my life, after all – I’d be facing its difficulties alone.

Another month went by, and I found a job at a company in Aleppo’s Suleiman al-Halabi neighbourhood. I was earning enough to raise my children without asking my family for support, but money was always tight and we suffered. Some days our fridge would be empty, no vegetables, no meat, no fruit – nothing.

Our relatives stopped visiting us, the only exception being the Eid holidays. My children looked forward to these occasions as they would receive “eidiya” – small amounts of money handed out by relatives as festive gifts.

When revolution broke out in Syria in 2011, life became more complicated. My husband’s family were solid supporters of the government, while I strongly opposed it.

At the time, my son was 12 and my in-laws had begun establishing a relationship with him. They tried to win him over and turn him against me.

They took advantage of the fact that I’d go out to participate in political meetings and demonstrations. They told him no one knew where I was going or who I was spending my time with. They implied I was an indecent woman, and he started to question my behaviour and argue with me.

Fortunately, I could tell what they were trying to do, and I dealt with it with all the calm and tact I could muster. I had frank discussions with my son, telling him about my political beliefs and explaining why I hated the Baath regime. I also introduced him to like-minded friends and encouraged him to socialise with their children.

It wasn’t an easy process and it took a huge effort, but I got through to him, and he finally came to understand my position.

As for my son, he is almost 17. He is a handsome, decent young man with a strong personality. He is my friend and my protector.

Reem is the pseudonym of a Damascus Bureau contributor living in Aleppo, Syria.