Syria: My Brother the Martyr

"He was sacrificed for the shadow of a cause, and I’m not sure if he even knew what that cause was."

Syria: My Brother the Martyr

"He was sacrificed for the shadow of a cause, and I’m not sure if he even knew what that cause was." 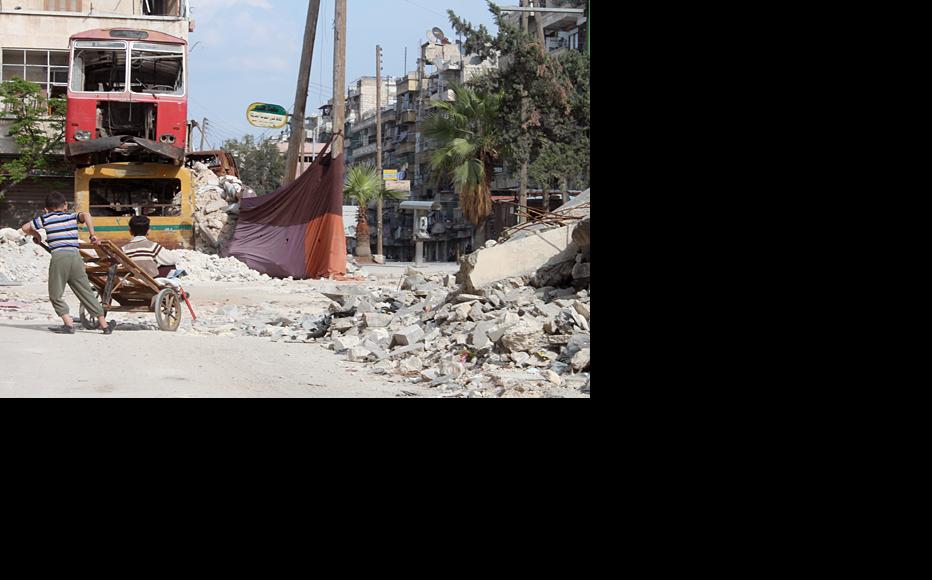 Children play near a curtain sheltering them from a government sniper. (Photo: Salah al-Ashqar)
The link has been copied

In December 1, 2013 I decided to pay my uncle a visit. I was at his house playing with my six-month-old cousin when the phone rang. My uncle answered, and then quickly hung up and told me I should go home to greet some visitors.

When I got home, the only person I found there was my mother. She was distraught and crying. She told me my brother was dead.

Minutes later, neighbours started flooding into our house, some of them bringing extra chairs. Over the next few days, these chairs were constantly in use as people came to offer their condolences.

I remember watching my family argue over where my brother should be buried. It turned out there was no need. More than a year has passed, and the burial plot they settled on is still empty. My brother’s body was never brought home.

His friends who visited us sat there quietly with hollow looks on their faces.

One of them told me what had happened. My brother was shot by a sniper. The people with him were unable to reach his body and drag it out of the firing zone.

I wanted to kick them all out – even my own family. I wanted to be alone.

I was unable to cry over my brother. I couldn’t shed a single tear over the childhood companion whom I had trusted more than anyone else.

Some people scolded me, urging me to cry if only for the sake of appearances. “People will talk,” they said.

Others whispered, “Poor thing, she has gone mad.” Still others said that I was “unpatriotic” and that I was glad my brother was dead.

I heard that someone had filmed the incident and posted the video online, I spent two days browsing various websites until I found it. In the video, I saw my brother lying on the ground as if asleep. He was surrounded by a group of men who were talking about God and country, and condemning the rebels who had killed him.

At that moment, I felt an equal amount of hatred towards both opposition and government. The former had killed my brother, the latter had enlisted him for military service, replacing his schoolbooks with a rifle and tossing him into the unknown.

For those who didn’t know him, my brother had a smiley face with beautiful dimples. He spent all of his time either working or studying.

He was like a son who cried on my shoulder whenever we faced difficult times. He was my friend, who taught me to be as tough as a man. He was a compassionate person who could make me laugh in my darkest hours. He was the father to whom I turned when facing problems I couldn’t solve.

I would only venture out for a swim in the sea if he were with me, knowing he would guard my life with his own.

I loved my brother dearly, and was jealous of anyone who used the nickname I’d chosen for him when he was born, Dudu.

I began documenting the times he visited us with more and more photographs, fearing the day would come when I would lose him.

I wished he would desert from the military, and repeatedly asked him to do so.

“We’re a bunch of criminals killing one another,” he’d answer. When I asked which side was better, he’d laugh and say, “They are.”

During the last two years of my brother’s life, we avoided discussing politics. It was an unspoken agreement, as neither of us wished to argue.

In the end, my brother died. They told us he was a martyr, but the word was an attempt to give death a sacred name.

I wish I could believe he was a martyr. It might perhaps mitigate the harsh impact of losing him. Perhaps it would justify his death.

But I choke whenever I try to say the word.

My brother died, he was not martyred. In my eyes, there is no difference between his death and the human sacrifices that were once made to appease angry gods.

He was sacrificed for the shadow of a cause, and I’m not sure if he even knew what that cause was.

Sama Meqdad is the pseudonym of a Damascus Bureau contributor living in Latakia, Syria.