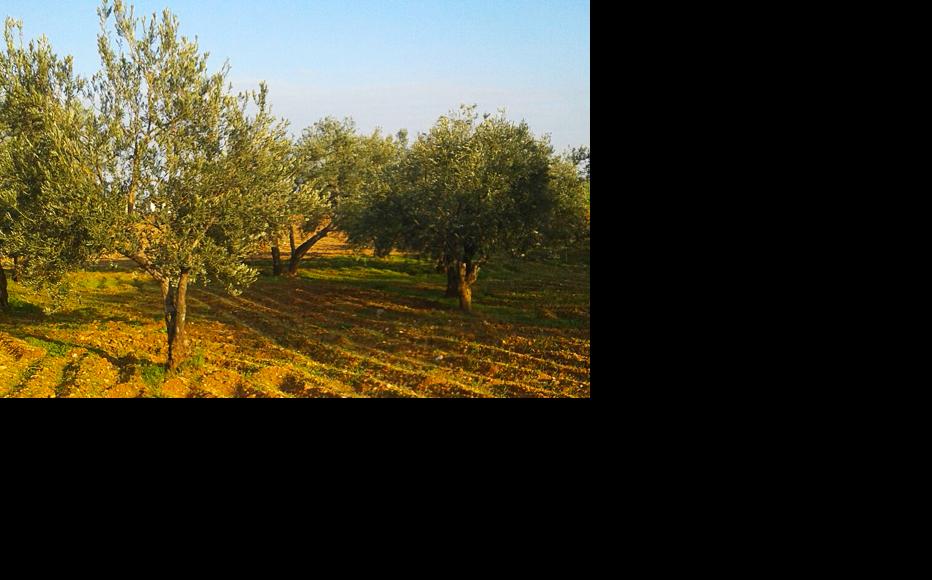 Mustafa al-Darwish owns half a square kilometre of land in Tal Minis, a village in the south of Idlib province. He used to plant wheat and barley in his fields, but government air raids have forced him to abandon some of them, which have turned into wasteland.

“It’s better to abandon the land than to be torn to pieces by the planes,” said the 65-year-old farmer.

Tal Minis is controlled by Jabhat al-Nusra and the Free Syrian Army (FSA). Most of its population of 15,000 relies on agriculture as the major source of income.

As the war in Syria continues, so does the suffering of Tal Minis’s farmers. Today the village produces only half the amount of agricultural produce it did in 2011.

Some farmers say the sharp increase in the price of farming inputs is responsible for the decline, but Darwish blames the aerial attacks. He holds both the government and opposition forces responsible, as fields and olive groves are targeted because they are near rebel camps.

“Should we expect government forces to shower them with flowers?” he asked bitterly.

FSA commander Abdel Munim Nassan insisted his forces were not located too close to farmland.

“We do our best to stay away from civilian areas, including homes and fields, and most of our camps are not located in areas targeted by the government,” he said.

Nassan believes the bombing is a part of a strategy to prevent the opposition from gaining full administrative control of the areas it holds, and also to create rifts between the FSA and local civilians.

“Once civilians start blaming us, they will undoubtedly demand that we leave the areas we have liberated,” he explained.

The United Nations Food and Agriculture Organisation predicts that wheat production in Syria this year will reach 2.45 million tons this year, an improvement on the past two years thanks to adequate rain, but still 40 per cent lower than the pre-war period.

Mahmud, who owns a grocery store, says the situation has got much worse since 2011 as diesel and fertiliser now cost much more than they did then.

“Before the revolution, diesel was sold for 20 Syrian pounds a litre, and now it costs more than 150 pounds. As for fertiliser, a 50 kilogram sack that sold for less than 1,000 pounds now costs 5,000 pounds,” he said.

Mahmud, 55, also points out that farmhand wages have trebled.

By comparison, market prices have merely doubled. Wheat now sells at 50 instead of 25 pounds per kilogram, and barley for 30 instead of 15 pounds.

Hassan al-Quwaydi owns 200 olive trees west of the village, near the Wadi al-Dayf army base. The area was fiercely contested for over two years until it fell to rebel forces in December 2014.

“During the past two seasons, my olive groves were bombed several times by the government,” said 50-year-old Quwaydi. “Seventeen of my trees were burnt, nine dried up, and 50 were left unharvested.”

Quwaydi believes the economic woes facing Tal Minis have little to do with raw material prices, but are a direct consequence of government retaliation against areas where it has lost control. He argues that this has led farmers to neglect the land and often to leave the village altogether.

“Government shells fall everywhere – they aren’t confined to rebel-held positions. The government doesn’t care about civilians, their homes or their fields, so it targets all the liberated areas,” he said.

Earlier this year, the Syrian government’s agriculture ministry issued a report stating that olive production in the country had dropped by 50 per cent, and said the reason was that some farmers had been displaced and others were unable to reach their fields.

Quwaydi says the high costs of growing olives are covered by rising prices, as olive oil that sold for 150 pounds a kilo before the 2011 revolution now goes for 600. But he also points out that these spiraling prices are inflated by the plummeting value of the Syrian pound, which is now worth more than 200 to the US dollar compared with 50 to the dollar in 2011.

Residents of Tal Minis are urging their local council to help improve conditions and support them with insecticides and fertilisers. Anis al-Rahmun, head of the council’s agriculture office, says it is unable to do so due to lack of funds.

Manaf al-Hashash is the pseudonym of a Damascus Bureau contributor living in Idlib, Syria.

Syria
Economy, Conflict
Connect with us