Syria: Farmers Harness the Power of the Sun

Solar energy is proving to be a blessing in Idlib’s western countryside.

Syria: Farmers Harness the Power of the Sun

Solar energy is proving to be a blessing in Idlib’s western countryside. 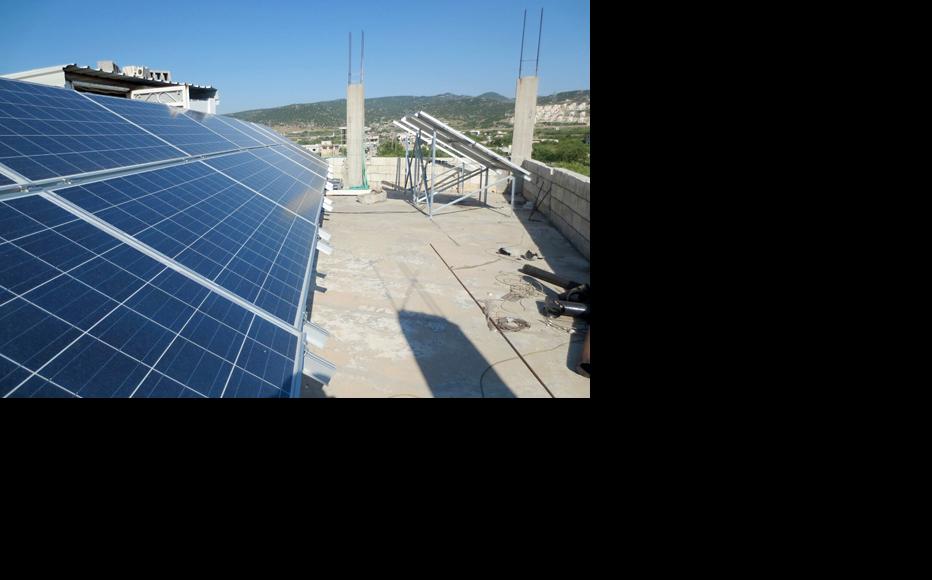 Solar panels have become a common feature on Idlib’s rooftops. (Photo: Sonia al-Ali)
The link has been copied

Before the revolution, Ahmad al-Sulayman grew apple trees on a five-acre piece of land in Idlib’s countryside. Watered by an artesian well, his orchard flourished.

But the conflict soon made his farming work untenable, the 47 year-old told Damascus Bureau.

“Prior to the revolution, I used electricity to pump water from my well to irrigate my orchards,” al-Sulayman continued. “Power cuts brought about by the crises have cost me dearly.”

The farmer could not afford to buy a generator and enough fuel to keep the well working, never mind the additional cost of pesticides and fertilizers.

For three years, al-Sulayman was unable to produce a single crop.

“I was forced to lease out my land on an annual basis. The meagre rent I collected was just enough to cover my family’s expenses,” he said.

However this year, thanks to a solar-powered irrigation project launched in his village Badama, al-Sulayman was able to irrigate his land for free and harvest his own apples again.

Solar power is proving a boon in Idlib’s western countryside, where the on-going civil war has led to power cuts and high fuel prices.

“Dark nights and hot summers pushed us to the edge, living under such difficult circumstance was no longer an option,” said Abu Saad who sells solar panels and other electrical appliances.

Demand for solar panels had soared, he explained. Cheaper than generators, they produce enough energy to power air-conditioning and lighting as well as to heat water for everyday use.

With agriculture devastated by the power shortages, a group of local activists have taken this concept one step further. Working in collaboration with Badama’s local council, with sponsorship from a US civil society organisation, they have launched a local solar-powered irrigation project.

“Extracting water to irrigate the land could only be done at a very high cost, and we needed a solution.”

Some 75,000 US dollars have been invested in solar panels, batteries, water pipes and other items. There are currently 12 separate units in operation, each consisting of 14 solar panels.

“The solar panels are positioned at a slanted angle to absorb sunlight throughout the day,” explained Amir al-Razuq, an engineer supervising the project. “These panels charge batteries which are connected to them, which in turn generate electricity.”

The power generated by the solar panels provides enough energy to extract water from artesian wells, allowing farmers to irrigate their lands.

According to project technician Samer al-Jabli, some 200 farmers were already benefiting from the initiative.

“The project provides irrigation water to around 300 acres of agricultural land in Badama. The soil in this village is fertile which allows farmers to cultivate vegetables, apple orchards, and olive groves,” he said.

Abu Yusif, 30, grows seasonal vegetables on his land and said that summer used to be his most difficult time, as he had to buy tanks of water for irrigation at very high prices.

“This solar-powered irrigation project now allows me to water my land for free,” he said. “The availability of water means that my produce is more healthy, and I can now sell it at a good price which has helped improve my living standards.”

Agricultural production in Badama has increased in quantity and improved in quality, and farmers are no longer struggling to make ends meet.

“The project is a huge success by all standards,” local council member Abu Mohammed told Damascus Bureau. “Not only is it a free and long-term alternative to electricity, it is also environmentally-friendly and sustainable.”

Abu Mohammed hoped the project would be rolled out to all liberated areas with electricity shortages.

“God has blessed us with sunshine throughout most of the year, and thanks to its rays, irrigated lands will never be unkind to those who cultivate them,” he said.

Sonia al-Ali is the pseudonym of a Damascus Bureau contributor from Idlib Countryside, Syria.

Syria
Water
Connect with us