Filling the vacuum created by the collapse of government institutions.

Filling the vacuum created by the collapse of government institutions. 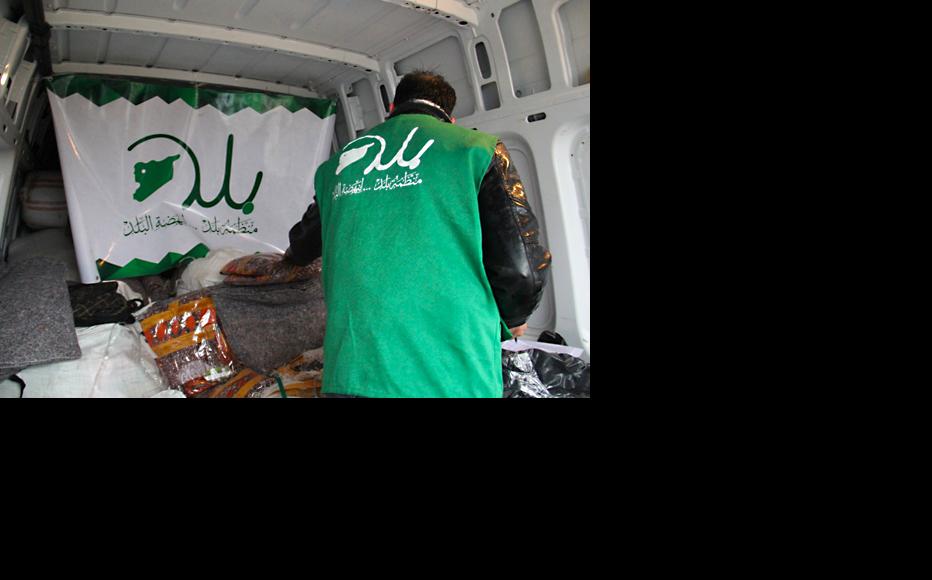 Members of the Balad Syria Organization distributing aid in the Idlib area. (Photo: Najib Katba)
The link has been copied

Ever since the start of the Syrian revolution, farmer Abu Ali had struggled to find a market for his wheat harvest.

“It became a nightmare to transport my produce across checkpoints,” the 41 year-old told Damascus Bureau. “I could only gain safe passage by bribing my way through.”

His sole source of income turned into a burden.

“Thankfully I found a solution to all my troubles this year with the Balad Syria organisation,” Ali said, explaining that the organisation not only bought his entire harvest at a fair price but also collected it.

Balad project manager Majd Shehabi explained how this Free Bread project had become one of the organisation’s most succesful initiatives.

“We support local farmers by buying wheat directly from them. We then supervise the milling process, and handle all logistics related to distributing free bread to poverty-stricken and displaced families in liberated areas in Aleppo, Al-Atarib and Darat Izza,” he continued.

“Since its launch in last September, this project has reached out to more than 5,000 beneficiaries, with numbers continuing to increase by ten per cent each month,” 34 year-old Shehabi said.

Another beneficiary was 75 year-old Abu Jamal, who fled Aleppo along with his 15 family members to settle in its western countryside.

“The support we received from the organisation helped alleviate the trauma my family and I suffered when we became homeless.”

The Balad organisation was founded on February 7, 2014 by a group of young Aleppo entrepreneurs to fill the vacuum created by the collapse of government institutions in liberated areas.

The organisation receives funding from a number of relief agencies including the Humanitarian Response Fund and the UN Office for the Coordination of Humanitarian Affairs (OCHA).

So far it has been involved in economic, social, educational, humanitarian, development and peace-building projects.

“The main role of the organisation is to monitor the performance of the public service sector,” the head of Balad’s board of directors, Fadi Fael, told Damascus Bureau.

REACHING OUT INTO THE COMMUNITY

Balad schemes are implemented by young volunteers like Suhaib, who told Damascus Bureau he had worked on a number of the organisation’s public service and relief projects.

“The work I did made me feel that I was doing something to help members of my local community,” said the 25 year-old university graduate.

Suhaib explained that the tasks had also given him valuable work experience, allowing him to progress to become a project leader. He is currently involved in a waste recycling project.

Its Stock House project employs women to clean and prepare vegetables which Balad then sells.

“My husband has been detained for over two years,” said Sumaya, a displaced employee. “The job Balad gave me helps me support my three children.”

Sumaya and her co-workers are paid a monthly salary and receive food aid from the organisation.

Balad also refurbished seven basements to turn them into safe schools for children and teenagers, covering teachers’ salaries and expenses such as textbooks.

One 14 year-old student, Salim, told Damascus Bureau he had rarely made it to classes at his previous school as it was frequently targeted in government airstrikes. He now attends his new school regularly.

He added, “The sound of aircraft does not bother me, because the school was built in a shelter.”