In areas outside government control, a patchwork of opposition groups run their own schools.

In areas outside government control, a patchwork of opposition groups run their own schools. 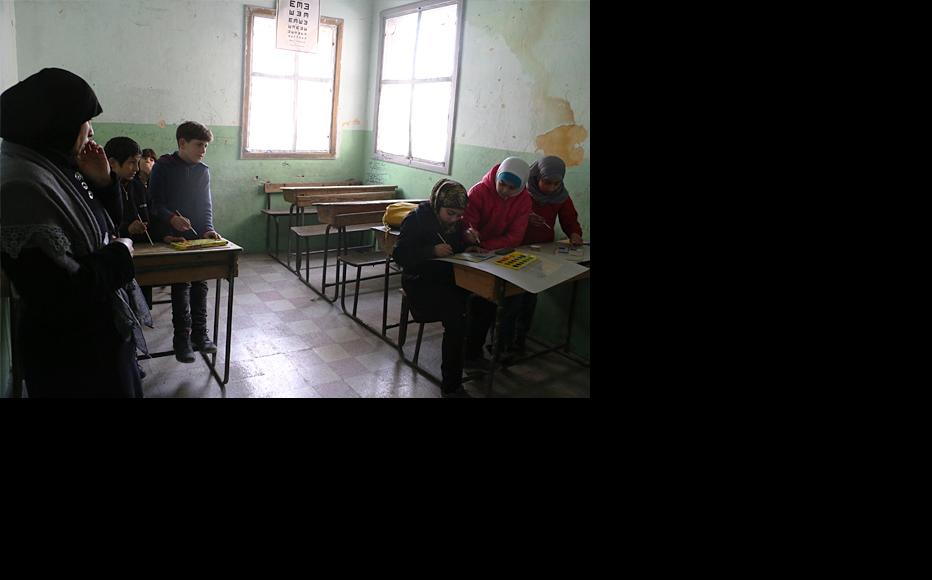 A woman teaches children drawing in the Saif al-Dawla neighbourhood of Aleppo. (Photo: Baraa al-Halabi)
The link has been copied

Sara, 15, sets out every morning for the Sharia Institute for Scientific Excellence in Kafr Nabel. At this school, run by the Islamist group Jabhat al-Nusra, she takes classes in religious law and science.

After returning home for lunch, she heads to the Haitham al-Bayush school, run by the National Coalition of Syrian Opposition and Revolutionary Forces, where she studies the national ninth-grade curriculum. This is identical to the one used by the Syrian government, minus all the elements that glorify the Baath party and its history.

When it comes to exam time, she has to go to yet another school to sit the tests set by the opposition.

Sara’s experience is typical of the many school pupils forced to navigate a path through an education system split between the old state system, National Coalition schools and Islamic learning centres.

Across Idlib, various educational institutions exist, some new and others government schools that are still operating. In the town of Kfar Nabel, a range of schools have been set up by the different ruling factions.

A 2015 survey in Kafr Nabel found that there were four Sharia schools belonging to Jabhat al-Nusra, with over 500 male and female pupils enrolled. There were also three National Coalition schools with more than 850 students, a number that is set to increase in the coming months with the opposition gaining ground in the surrounding region.

Sara says she is doing her best to benefit from the time she spends at the two schools she attends.

“At the Institute for Scientific Excellence, I learn Islamic law and I also take other courses like maths and Arabic in order to acquire a broader range of knowledge,” Sarah said. “There are also contests, prizes and free trips to nearby archaeological sites, which are what attracted me to the institute.”

Sheikh Fadel Samih al-Akel, the director of the Sharia Institute, said the school was launched in 2014 after rebels captured Kfar Nabel.

“We teach lessons in Islamic Sharia to young women and offer some core science courses for students in the ninth and tenth grades,” he said. “Enrolment has been good, thank God, and our educational staff are appointed for having relevant university degrees in Sharia law, Arabic literature, and maths. We now employ 15 teachers.”

For boys, there are special courses in Sharia law held at mosques which run for two or three months. They memorise the Koran, learn the “hadith” or sayings of the Prophet Muhammad, and study “fiqh”, Islamic jurisprudence.

Sheikh Amer al-Ahmad, head of the Sharia Institute’s outreach office, said a range of new courses had been created from scratch for both boys and girls because “the regime curriculum served the ruling power and worked to burnish the image of the ruler.”

“The education we’re offering is not in the service of any one authority, but seeks to return to pure Sharia teachings,” he added.

Ahmad said a number of systems had been examined before a syllabus based on the Saudi curriculum was chosen. That means it is recognised by the Arab League, as it is an official curriculum from an existing state.

“We have full confidence in what Jabhat al-Nusra has chosen to teach,” said Abu Abed al-Rahman, a member of the Kfar Nabel local council. “We are Muslims and need someone to help us spread Islam and proper, legitimate, orthodox Islamic thought.”

Schools opened by the National Coalition since 2013 include the Freedom School in Kfar Nabel and the Development and Humanitarian Care schools in the nearby village of Hass. They use an entirely different syllabus from the Jabhat al-Nusra one.

“We teach all the subjects that used to be offered in government schools, except for ‘national education’,” said Mustafa, headmaster of the Freedom School. “That subject is inextricably tied to the regime and to the ruling Baath party in Damascus, and is devoted to promoting their ‘heroism’, which is why it was removed.”

Mustafa said there was growing demand for places at opposition schools, he added.

“Most pupils take their formal exams in our schools, whether for junior or secondary school certificates, especially since travelling to regime-held areas to take exams has become so dangerous and risky,” he said, adding that pupils who went into areas under government control risked arrest, torture and even death.

Mustafa predicted that all schools in Kafr Nabel would soon be run by the National Coalition, especially since the government stopped paying teachers’ salaries after losing control of Idlib province.

“We teachers can no longer travel to regime areas to get our salaries because of the many military checkpoints belonging to the regime along the roads,” said Alaa al-Qadur, a teacher at the Freedom School. “We get asked to report to the security agencies or other state institutions and this exposes us to the possibility of arrest or death. It’s happened to a number of our colleagues, so most teachers have been forced to leave their jobs and look for other work. The alternative is to join the [National] Coalition schools and teach there.”

Staff at the schools run by the National Coalition are a mix of teachers dismissed by state schools and university graduates looking for employment opportunities.

Ussama al-Allush, a tenth grade student at the Freedom School, said, “It’s natural for those of us who received our junior certificates from coalition schools to continue our education there, because the regime schools don’t recognise pupils to whom they haven’t awarded certificates.”

Allush fears that pupils leaving National Coalition schools will not be accepted by universities locally or abroad.

Faten al-Aswad, a teacher and student counsellor, described the terrible impact conflict has had on education.

“The current conditions in Syria have had a bad effect on the students’ psyches, and many of them have completely dropped out of school because of the sheer number of differing [teaching] approaches, because of the lack of security, and because they fear all their studies will come to nothing in the end,” Aswad said. “If the political and military situation doesn’t stabilise soon, there will be a crisis of epic proportions in the education sector and… [for] future generations.”

“This war has destroyed our schools, but it won’t destroy our will, and we will continue to pursue our education wherever we can. This crisis must end eventually,” he said. “As the poet Abu al-Qasim ash-Shabbi once said, ‘If a people desire to live, then fate will undoubtedly answer their call.’”

Syria
Conflict, Education
Connect with us