Syria: Clusterbombs on a Wedding Day

How do you celebrate under the risk of constant bombardment?

Syria: Clusterbombs on a Wedding Day

How do you celebrate under the risk of constant bombardment? 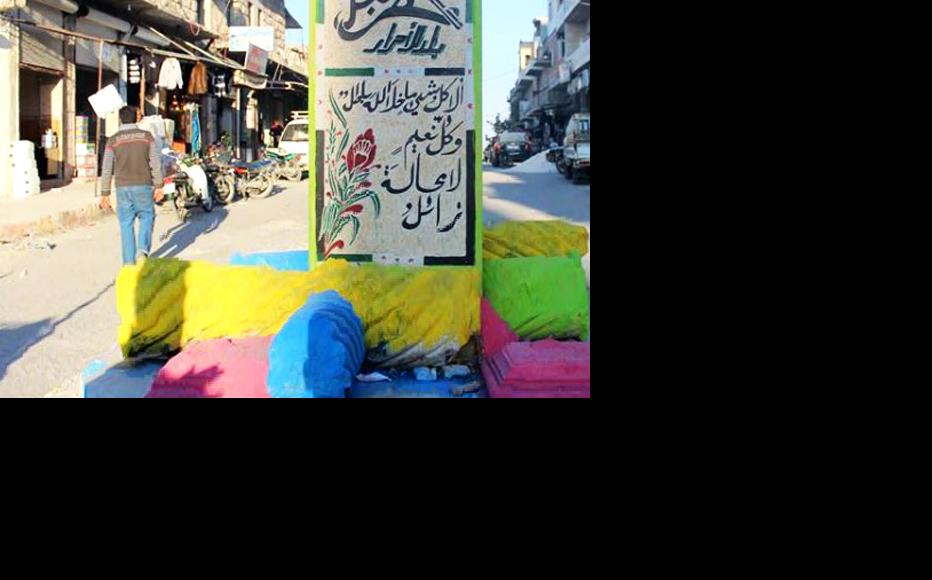 A memorial in Kfar Nabel honouring the town’s fallen citizens. (Photo: Damascus Bureau)
The link has been copied

“The wedding should be held after nightfall,” my mother said. “The darkness will keep us safe.”

“No,” replied my father. “Driving during the night will make us an easy target for government planes. We should hold the wedding during daylight hours, when there are other cars on the streets.”

“But planes usually conduct their sorties during the day, not at night,” my mother responded.

“There is no saying when they will strike,” my father pointed out. “The Russian planes operate both day and night.”

This conversation between my parents took place on Thursday, November 12, 2015. They were discussing my brother’s wedding, and after much deliberation decided to hold it during the day.

Prior to the Syrian revolution, weddings in Kfar Nabel began with a bridal procession, where a small convoy of cars would accompany the bride from her family home to the wedding venue.

Throughout the procession, the convoy would play wedding songs at full volume, flashing their headlights and honking their horns to the beat. The bride's car would stand out from the others, as it would be decorated with flowers, balloons and coloured streamers.

The bride’s party would see women dressed up to the nines, singing and dancing to the latest popular songs.

The men would usually hire a live singer and would dance the traditional dabka, the feet slamming to the floor to the rhythm of the folklore songs.

Celebrations would last throughout the night, only ending at the break of dawn.

Those days are long gone.

On my brother’s wedding day, only three cars went to the bride’s house. One for the bride, one for her family, and one for our family.

No flowers or balloons distinguished the bride’s car from any other car on the street. The drive was held in complete silence, with no music or flashing lights.

The ceremony was a quiet family gathering, with no singing, dancing or ululations.

The only thing that distinguished the wedding from the countless funerals being held nowadays were the refreshments we offered our guests; a traditional pastry called shebiyat which has a sweet creamy filling and is smothered in syrup.

As we sat there eating and talking, a young girl ran into the room.

“Mother, come and see the fireworks,” she said.

We all rushed outside to see what she was talking about, and indeed the sky was illuminated, but not with fireworks.

Hundreds of fireballs were slowly showering down on the north side of town. We began discussing just what they could be; one person said a plane had exploded, another said they were meteors.

“Those are airstrikes,” said a guest named Fateh. “Come, we must leave straight away,” he told his wife.

“Break up the crowd!” another guest shouted, “We have to disperse immediately”.

Within minutes everyone had left, as both Syrian and Russian planes were known to target large crowds.

I walked into our house and logged on to the internet to see what was happening. An activist had already published the news on Facebook.

Baynin is a small town, barely 15 kilometers to the north of Kfar Nabel.

“This is my wedding present from the Russians,” said my brother.

It was not yet six in the evening, but the wedding was over.

Hiba al-Aboud is the pseudonym of a Damascus Bureau contributor. The 24-year-old was forced to abandon her Arabic literature course at Damascus University when the revolution started. She now works at the Radio Fresh station.

Speaking Out: Women's Voices from Syria
Syria
Women
Connect with us