Government accused of spending too little oil money to improve their lives.

Government accused of spending too little oil money to improve their lives. 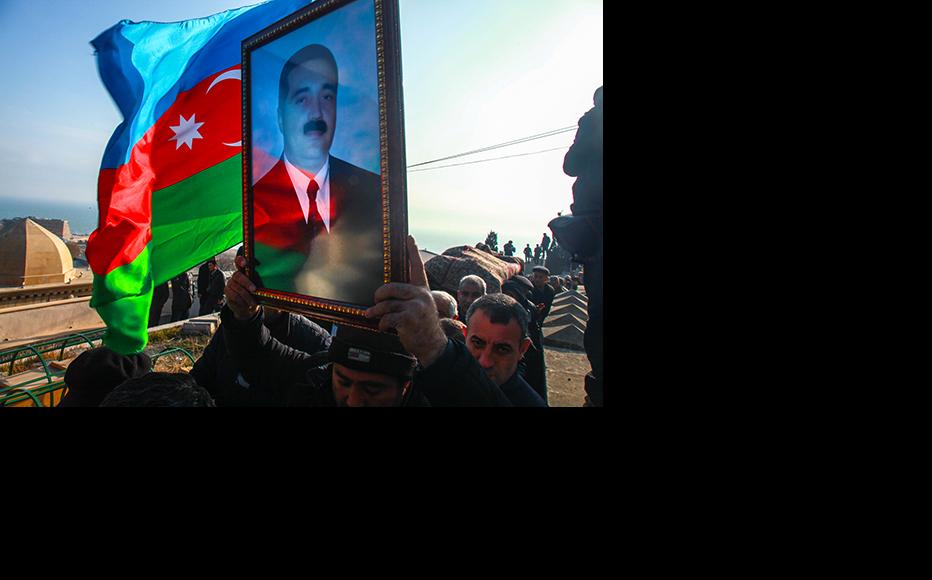 A picture of the late Zaur Hasanov is held up during his funeral. (Photo: Aziz Karimli)
The link has been copied

The suicide of a disabled army veteran in Azerbaijan has raised concern about the inadequate welfare provision for ex-combatants injured in the Nagorny Karabakh conflict two decades ago and now living in poverty.

Zaur Hasanov set himself on fire outside the headquarters of Azerbaijan’s Trade Union Confederation on December 25. He was taken to hospital but died three days later.

While he was still conscious, Hasanov explained his action by accusing the confederation’s chairman, Sattar Mehbaliyev, of depriving him of his only source of income, a café, back in 1995. Relatives said he had spent the years since then seeking restitution and surviving on a tiny pension.

Mehbaliyev denied any wrongdoing, saying it was the courts that ordered the café to be torn down. He met Hasanov’s father and promised that the Trade Union Confederation would pay the family 100,000 manats (130,000 US dollars) as compensation for the café and 300 manats a month for each of Hasanov’s five children.

The father, Hasan Hasanov, is calling for the prosecution service to look into the circumstances of the suicide to see whether there is evidence that someone drove his son to take his own life.

“We appealed to the president and he promised to look into it. But there’s been nothing since then. If this continues, I’ll go to the police,” he told the website www.mediaforum.az

The cause has been taken up by the Alliance for Free Karabakh, an umbrella group that includes veterans and disabled ex-combatants.

“The state must provide for its sons, who gave their lives and their health for it. Zaur Hasanov had five under-age children. The officials to blame for this tragedy must be punished,” the group said in a statement.

The Karabakh conflict broke out in the late Soviet period and ended with a ceasefire in 1994. Nagorny Karabakh is still controlled by an Armenian administration, and little progress has been made towards a political settlement.

Some 11,000 veterans in Azerbaijan were left disabled by the war and find it hard to support themselves and their families.

Rey Karimoglu, spokesman for the Karabakh Invalids’ Organisation, says many veterans live in terrible conditions, and appeals to the authorities for help go unheeded.

“Although they [the authorities] have provided the basic conditions of life for the families of invalids and martyrs [war dead], the problems haven’t ended,” he told IWPR. “We are currently monitoring more than 20 invalids who are close to killing themselves. We get a lot of letters from invalids living in the provinces.”

Critics of the government say it could easily afford to help former combatants.

“If oil revenues were used effectively, the lives of poor and disabled people would be a lot better,” Samir Aliyev, head of the Centre for the Support of Economic Initiatives, told IWPR. “In the context of an expanding budget, the pensions paid to disabled people are just laughable.”

Disabled ex-combatants are eligible for benefits ranging from 125 to 200 manats a month, depending on the extent of incapacity, plus a state pension of 75-110 manats and the army pension of 33 manats.

The government says it has distributed new apartments to 5,000 disabled ex-combatants, and President Ilham Aliyev has promised a flat for everyone in this category as well as for the families of men killed in the war.

Karimoglu said things were not as rosy as officials liked to think.

“There are many problems with the distribution of apartments. The state builds housing for the disabled, but then officials demand bribes to get them,” he said.

Karimoglu said that in his own case and others, income was as much of a problem as accommodation.

“The president provided me with a flat, but I can’t sit in it going hungry. In order to eat, I have to rent out the apartment and live in a shack with my family,” he said. “I have four children and I receive a pension of just 150 manats.”

Another disabled Karabakh veteran, Namiq Mammadov, described his desperation at the prospect of losing the workshop he rented.

“The local authorities want to knock down the workshop and widen the road. How am I going to feed my children now? I’m not asking for charity from anyone, I just want an opportunity to earn an honest crust,” he told IWPR. “What am I to do? Should I burn myself too so as to solve my children’s problems?”

Aytan Farhadova is a journalist with the Bizim Yol newspaper in Azerbaijan.

Azerbaijan
Social justice
Connect with us