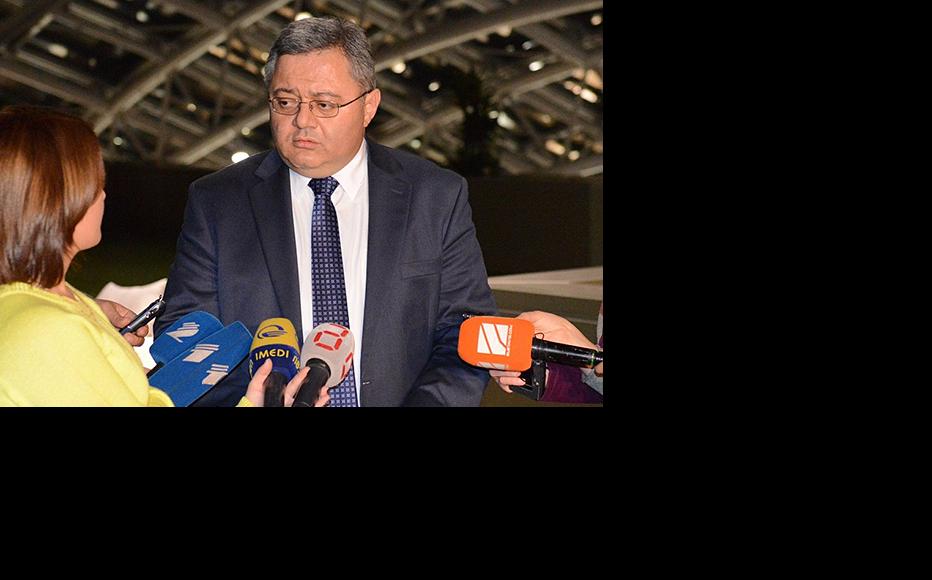 The speaker of Georgia's parliament, David Usupashvili, mounted a robust defence of the local government reform bill. (Photo: Georgian parliament website)
The link has been copied

An ambitious programme of local government reforms has come under attack from the head of the Georgian Orthodox church, who warned that too much devolution would encourage separatism.

The most controversial part of the programme envisages new regional assemblies that would provide a representative body to balance the powers of the provincial governors, who are appointed from above. These assemblies would be drawn from the members of existing municipal councils, rather than being elected themselves.

A second reform envisages an expansion in the number of cities classed as “self-governing” from five to 11. Telavi, Mtskheta, Gori, Akhaltsikhe, Ambrolauri, Ozurgeti and Zugdidi will join the capital Tbilisi, Rustavi, Kutaisi, Poti and Batumi which already have this status. All these cities will elect their mayors directly. Only Tbilisi’s residents get to choose their mayor at present.

“No government in the last 20 years has supported decentralisation so clearly,” David Losaberidze, an expert on local government at the Centre of Local Democracy, told IWPR.

It is the first of these reforms, the plan for new provincial-level assemblies, that has caused the stir.

Many opposition politicians fear it will allow ethnic minorities – above all Azerbaijanis and Armenians living in the southeast and southwest of Georgia, respectively – to create their own mini-parliaments. For these critics, this raises the spectre of breakaway movements.

Patriarch Ilia II of the Georgian Orthodox Church shares those concerns. In a sermon he gave on December 4, he said, “This is a very difficult issue. If it is implemented, we will see Georgia collapse. That is something we will never accept, and we will do everything we can to stop it [the reform] being implemented.”

The patriarch said there should be no “intermediaries” in the relationship between each region and central government.

Some politicians saw these comments by an influential church leader as a useful intervention that might head off a potentially dangerous change.

“This is a serious step towards federalism and towards a regional structure, and it poses a very substantial threat,” Giorgi Akhvlediani, whose Christian Democrat party is not represented in parliament, told journalists.

Irakli Sesiashvili, a member of parliament from the ruling Georgia Dream coalition, agreed that the patriarch had made a valid comment.

“His Holiness has made a statement and we must thank him for it. His vision is very important to us,” Sesiashvili told IWPR. “Naturally, whenever the patriarch makes such a statement, we discuss the issue with him. We must agree on principles that will be acceptable to the majority of Georgia’s population.”

Others from Georgian Dream backed the official line – it is, after all, their government that is driving the reform.

Parliamentarian Tamar Kordzaia was one of the first to accuse the patriarch of interfering in politics.

“Members of ethnic minorities are part of our country. They have the same right to take part in local elections as any other citizen of Georgia. I’d be interested to know where exactly he sees a risk of separatism in this bill,” she wrote on her Facebook page.

The speaker of parliament, David Usupashvili, who is also from Georgian Dream, dismissed talk of national unity being under threat as “nonsense”. He pointed out that separatist movements in Abkhazia and South Ossetia in the early 1990s, which led to war and then de facto separation, happened at a time when Georgia’s state structures were heavily centralised.

“Did the fact that Georgia wasn’t decentralised and didn’t have local government protect us from separatism in Abkhazia and South Ossetia?” he asked. “It’s a complete misconception to say that local government could stoke separatism. What is it that breeds separatism, an attempt to break away? It’s a lack of rights, the feeling that your rights are not being protected and that you lack opportunities to address your own problems.”

The opposition United National Movement of former president Mikheil Saakashvili has chosen not to side with the government’s opponents on this issue.

Leading member Giga Bokeria said that while the reform could be criticised on grounds such as increasing the amount of bureaucracy, that was all.

“The objections we have heard from some politicians and spiritual leaders are, for me personally, unacceptable,” he told reporters. “It is at best ill-conceived to talk about separatism or about the country falling apart. You must remember that church and state are separate.”

Most independent observers have welcomed the local government proposals, saying they would help create greater democracy and give people more of a say in how they are ruled.

Vakhushti Modebadze, head of the Centre for the Study and Monitoring of Human Rights said this was really a battle between supporters of democracy and authoritarianism.

“The patriarchate is, unfortunately, a supporter of authoritarianism,” he told journalists. “The patriarchate should look to its influence over its flock, and not exploit it for political ends…. We cannot stop anyone from expressing an opinion, but there must be standards of self-restraint when one has a lot of authority and when the position one takes can influence people.”

Sofo Bukia is an IWPR-trained journalist who works for the Rustavi-2 broadcasting company.