A Stolen Biscuit: Hunger in a Syrian Classroom

A Stolen Biscuit: Hunger in a Syrian Classroom 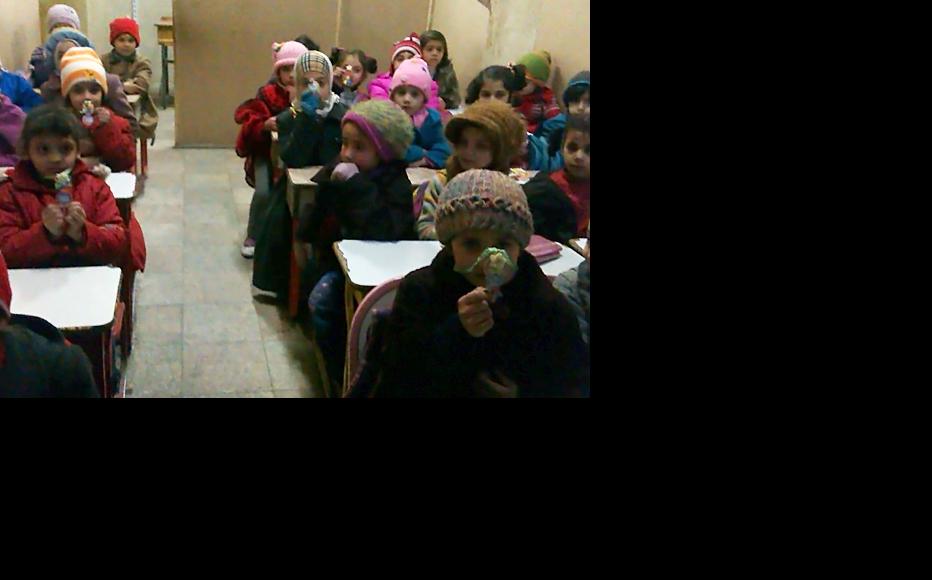 Children wait to eat after school is over. (Photo: Hiba al-Rahman)
The link has been copied

It was almost break time at the girls’ school I worked at in Douma. As I walked down the corridor, I heard a girl crying and went to investigate.

The sound was coming from the fifth grade classroom and inside I found Ghada, our head teacher, trying to calm two young girls.

One of them, Sidra, had emptied the contents of her bag onto the floor and was crying and shouting accusations at her classmate.

The other girl, Dania, was crying as well, denying the accusation.

We took both girls to our administration office, a small makeshift room under the staircase. Our school operated from a basement to protect us from bombs.

Sidra told us her story.

“Miss, yesterday my father bought me a biscuit for 250 pounds [one US dollar] and I saved it for today,” she said. “Only Dania saw it – and she once stole my pencil.”

Dania looked at Sidra, her eyes full of fear, and shouted, “Miss, I swear it wasn’t me. You can search my bag.”

When I searched her bag, there was no biscuit inside.

Sidra said, “Search her sister Tasnim, she’s in the first grade, and Dania left our classroom during the first lesson. You can ask our teacher.”

Ghada went to get Tasnim, and when we searched her bag we found the remaining half of a biscuit. Young Tasnim started to cry.

“It’s not my fault,” she said. “Dania told me she bought the biscuit and she divided it between us. You can take it, but we’re hungry. It’s the only food we’ve had since the boiled spinach we ate last night.”

I asked Tasnim and Sidra to return to their classrooms, and then scolded Dania for stealing and lying.

Dania told me her story.

“My father’s arm is paralysed, Miss, and he hasn’t been able to find work since the siege [of Eastern Ghouta] began. I’m hungry and we don’t have any food at home.”

Her little eyes were swimming with tears, so I tried to calm her down. I told her I’d solve the problem if she promised never to steal again. Her head hung in shame as she left the room.

I went looking for Sidra and explained why Dania had stolen the biscuit. The story made her cry and she said, “I forgive her. She doesn’t need to pay me back for the biscuit.”

I took Sidra back to her classroom where she spoke to Dania in front of the whole class, “I forgive you,” she said.

The two girls hugged. Sidra took Dania’s hand and said to the rest of the class, “None of you should give Dania any trouble. We’re all sisters here.”

During break time, I held a meeting with the other teachers to discuss the issue. Many of them described similar incidents with their pupils, all caused by poverty and hunger.

The siege of Eastern Ghouta was becoming ever more suffocating. Schoolchildren were often malnourished and they performed poorly in academic terms. Theft was common. I lost count of the number of times children fainted from hunger in class.

We discussed possible solutions and decided that it would be best to pool the food that students and teachers brought in, and then divide it in the classroom. After the recess, all the teachers discussed this plan with their classes.

When young Dania stole that biscuit from Sidra in January 2014, this small idea – a modest, independent solution to a big problem – was born. It proved a success.

I also learned an important lesson myself. The children at our school taught me that youngsters are far more generous than adults. While they shared their meagre amounts of food with friends, adults continued to kill one another, for reasons that seem trivial when compared to the suffering of a hungry child.

This realisation came to me in a basement in Douma, where the government was trying to kill people with its heavy weapons and starve them under a suffocating siege.

It is hard to believe the world is watching in silence while all of this is happening. Perhaps the world has just forgotten that Douma exists.

Hiba al-Rahman is the pseudonym of a Damascus Bureau contributor living in Douma, Syria.