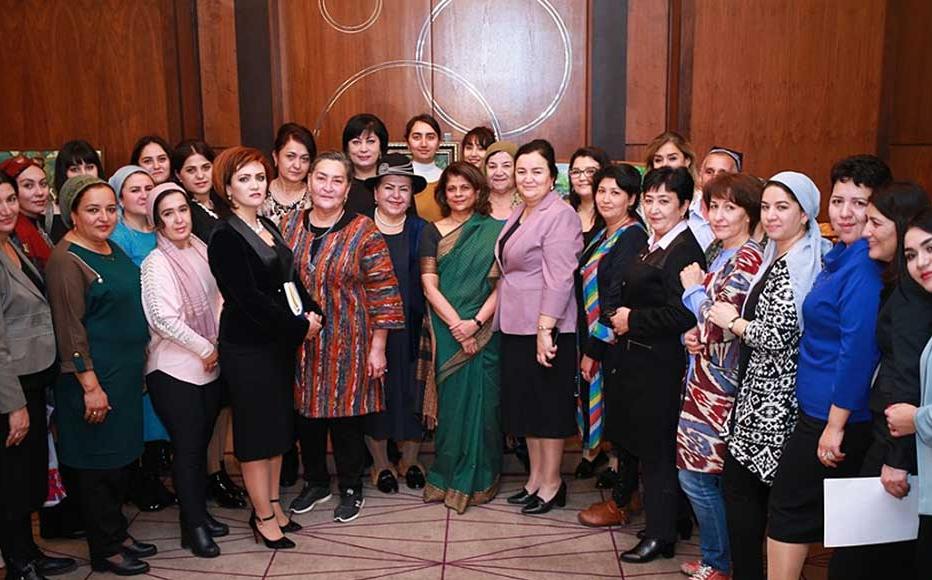 Participants of the National Forum in Tajikistan, dedicated to women entrepreneurship in the country. © AsiaPlus news agency
The link has been copied

When Mahfirat Sairakhmonova decided to buy eight hectares of land to start a farm, her neighbours and relatives said that she would never make it work.

“When I established the farm, many people did not believe that I could succeed,” she explained. “They said, ‘How can a rural woman manage a farm?’ They did not believe that a woman from the countryside would be able to run a business and provide several others with a permanent job.”

But fifteen years on, the farm she bought with her savings and a 20,000 somoni (2,000 US dollar) bank loan is flourishing, producing crops of cotton, vegetables and fruit. The family members who advised her to leave the business and stay at home to raise her children like other women have had to admit they were wrong.

“Luckily, now they have realised that a woman can succeed in many spheres: both solving family problems and being a successful leader,” says Sairakhmonova.

Although the number of female entrepreneurs in Tajikistan is growing, they still face challenges including conservative attitudes towards women in business and leadership roles.

The majority - 95.5 per cent or 72,000 of women were registered as individual entrepreneurs. Of this number, just over half had small farms like Sairakhmonova.

Others have businesses in the technical and medical fields.

Manzura Ghafurova runs a network of ultrasound diagnostic offices, employing 28 doctors in various fields of expertise in her Shafkat company.

Having started her business in the city of Vahdat, 20 kilometres east of Dushanbe, she has since also opened a clinic in the Spitamen district of the northern Sughd region, employing more than 15 people.

Ghafurova said that although her business continued to expand, she still encountered barriers including traditional stereotypes. In Tajik society, she explained, it was difficult for a female manager to solve certain issues.

“The majority of our society does not take a woman leader seriously, but despite this, I try to follow my principles,” Ghafurova said, adding that there were other problems that both male and female entrepreneurs shared.

These included over-zealous inspection authorities that “try to find the weaknesses” and sometimes tried to extort bribes, as well as difficult accessing loans and battling through bureaucracy.

“It is difficult to start a business in the country when the process of obtaining licenses takes a lot of time,” Ghafurova concluded.

Gulbahor Makhkamova, the founder of the Imon International Microcredit Deposit-taking Organisation (MDO), said that women’s choices were often limited by a skills gap and lack of financial support.

“Now most women are involved in spheres with competitive markets, such as small-scale farming, trade, educational and medical services. The lack of women with mathematical and engineering knowledge hinders the creation of new businesses in the fields of innovation, production and finance,” Makhkamova said.

She argued that the state should see that “women’s entrepreneurship can become a reserve for the development of the modern economy”.

“It is women who can provide what the economy needs today: creativity, intuition, desire to preserve and increase, social responsibility, interest in continuous learning and development,” Makhkamova continued.

She suggested a targeted, comprehensive program for female entrepreneurship support which would include training centres, loans for starting a business and comprehensive support for small enterprises.

“Certainly, not every woman is interested in starting own business. However, those who would like to engage in entrepreneurship now encounter internal and external barriers. The state’s task is to minimise them,” she concluded.

There is a high level of labour migration from Tajikistan to other countries, primarily Russia, and economist Bahrom Sharifov said that this had pushed more women towards starting their own business.

“The status of women has strengthened due to the fact that many men left as labour migration. Tajikistan needs to learn from the experience of advanced countries, which are doing everything to involve women in entrepreneurship. For example, we need special programmes to support women’s entrepreneurship.”

Sabohat Mahmadalieva, spokeswoman for the government’s committee for women and family affairs, said that her department had indeed provided an annual grant for 80 female entrepreneurs each year since 2006.

The committee regularly publicised the grants available on their website and in the Jumhuriyat state newspaper, as well as through its 68 departments and offices in cities and districts around the country.

Village women “have the opportunity to submit proposals to the tender commissions for the presidential grants allocation,” Mahmadalieva continued, adding that they had received 211 such submissions in 2019.

These grants were open to all women who want to start their own businesses, she said.

“However, since 2018 to 2020 in Tajikistan have been declared a period of rural development, tourism, and folk crafts, the women from rural areas are the priority,” Mahmadalieva noted.

Sociologist Maryam Davlatova said that gender stereotypes about women had hardened since the Soviet period, when female leadership was more valued.

“They were prepared for such work very well,” she said. “There was a system where girls received leadership skills already in school and then received a good higher education. Therefore, at that time, they were not just random staff members.”

This was no longer the case, Davlatova continued.

“Career progression is more difficult for women,” she said. “There is a glass ceiling. Although the situation is slowly changing, a lot of work needs to be done on this.”