Should I Marry my Husband's Brother?

A war widow is faced with an agonising decision.

Should I Marry my Husband's Brother?

A war widow is faced with an agonising decision. 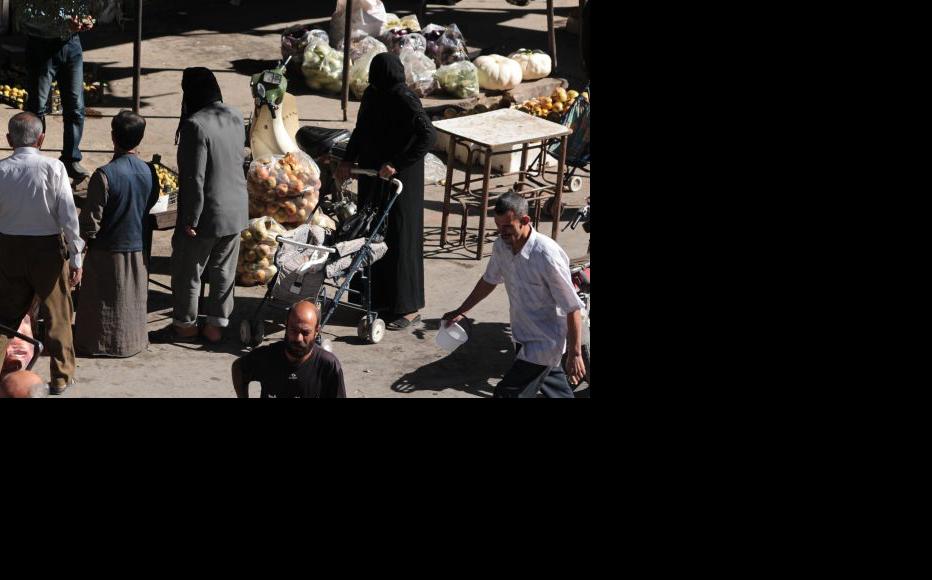 A woman from Idlib countryside shopping in the market. (Photo: IWPR)
The link has been copied

One evening, six months after the death of my husband Ahmed, I sat with my mother and sisters in my parents’ house and talked about how my children and I were now living.

I noticed that my mother looked at me strangely, as if she was hiding something, but I didn’t know what it was.

It was April 13, 2016. As we sat chatting, there was a loud knock on the door. It was the wife of my husband’s brother Fadel. She looked angry. She came in and started screaming and cursing me.

I didn’t understand why at first, but then she said, “Couldn’t you find someone other than my husband Fadel to marry?”

I was furious and felt I had no option but to kick her out of the house.

“Get out of my way, what are you saying?” I shouted at her. “It is impossible for me to get married after losing Ahmed. How can I marry his brother? That’s impossible!”

But what was impossible for me was very possible for Fadel and my parents. After she left, I understood why he had been coming to visit us so often, as well as the reason for the looks my mother and sisters had been exchanging.

My mother told me that Fadel asked for my hand in marriage, on the grounds that he wanted to protect me and raise his brother’s children himself. My eyes filled with tears and I began to cry uncontrollably. What was I hearing?

I blamed my mother for not telling me anything and because everyone was talking about something that concerned me without my knowledge. Then my father came and also told me about the marriage offer. I kept silent and let my tears speak for me instead. I didn’t want to marry anyone after Ahmed, let alone his brother.

Fadel’s and his wife had been married for four years. She couldn’t have children. I began thinking that perhaps he had chosen me because I could, and that way he could satisfy his desire to have a family. That was the main reason, not to care for his brothers’ children. But how could he think that way? How could he accept marrying his brother’s wife?

The next day, Fadel came to visit again, but unfortunately my father didn’t apologise and tell him his offer had been refused.

Instead he said, “Let’s give her some time, she wants to think about it.”

They talked for nearly an hour as I eavesdropped from behind the door. Fadel told my father, “I will treat the children the best way they could be treated.” Unfortunately, my father kept agreeing with him.

I felt myself burning inside. “Where are you Ahmed?” I thought to myself. “Come see and hear what’s happening to your wife after your death.”

After Fadel left, my father called me to talk and told me that a woman without a man faced a difficult future, and that Fadel had more right than any other man to raise his brother’s children.

God gave me the strength to answer him in a fearless voice. I said, “I don’t want to marry anyone after Ahmed, be it Fadel or someone else. I want Ahmed to be my husband in my life after death and I will wait for that moment.”

Everyone started trying to convince me to change my mind, my father, my mother and my siblings, but I didn’t give up.

I fell asleep that night trying to keep the nightmare away from me.

Maybe my children would call their uncle “father,” but how could they have brothers who were their cousins at the same time? How could I do that to Fadel’s wife and make her miserable by taking her husband away from her?

I didn’t and will never accept the idea. The war deprived us of a lot of things, but we still have some sense of loyalty. I will only ever be Ahmed’s wife.

Amal Mohammed, a 34-year-old mother of three, lost her husband in a shelling attack. She lives in the town of al-Naquir in the Idlib countryside, having fled Sahel al-Ghab, and is looking for work.

Speaking Out: Women's Voices from Syria
Syria
Conflict, Life
Connect with us