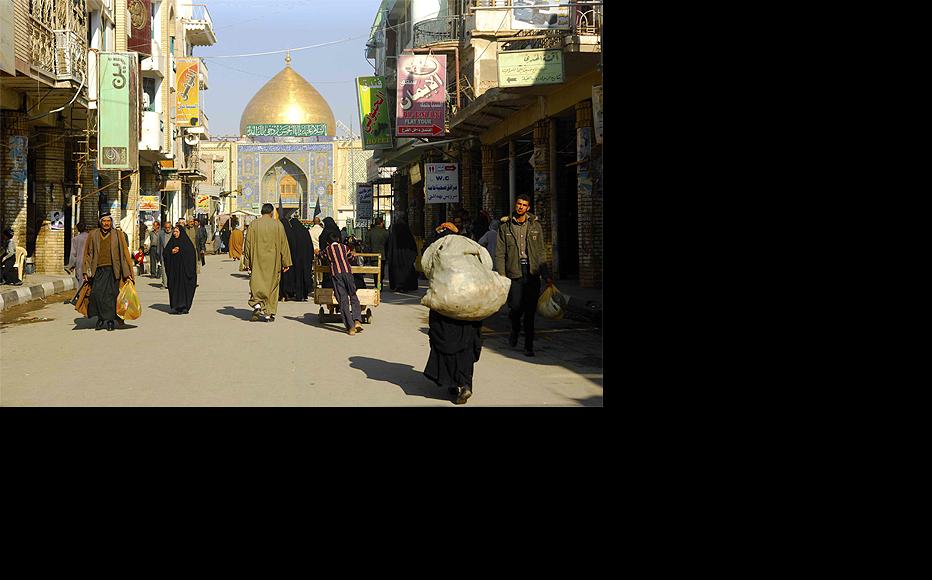 The city of Najaf, one of the holiest in Shia Islam and home to Iraq’s powerful Shia religious leadership, which has been shaken by a sex scandal. (Photo: Jamal Penjweny)
The link has been copied

A top-level Shia cleric has been defrocked over sexually explicit videos posted on the internet that have outraged devout communities across Iraq and tarnished the image of the sect's highest religious body.

Munaf Hamdan Naji al-Mosawi, a close aide to Grand Ayatollah Ali al-Sistani for 11 years, has gone into hiding after intimate footage apparently recorded on his mobile phone ended up in the hands of neighbours who marched to his home in Amara to demand the return of their religious donations, according to IWPR sources - religious figures in Amara and Najaf, where Sistani's office is based.

The controversy, which has yet be reported by the national media - presumably because of its sensitivity - but has been widely discussed and reported on the internet, has ignited debate about the personal conduct of religious representatives and drawn charges of hypocrisy from Shia followers around the country.

Some commentators see the alleged incident as a blow to the reputation of the Marjaya, Iraq 's highest Shia religious body, and say it even questions the judgement of the deeply revered and popular Sistani, one of the highest-ranking Shia clerics in the world.

As the first public sex scandal to hit a senior religious leader in Iraq , the alleged videos have become a burning controversy - despite claims from local reporters that clerics and officials in the ultra-conservative city of Amara ordered them to ignore it.

"I watched the videos. The scenes show [Mosawi] has no understanding of morality or ethics. A cleric is a symbol of his religion. When they do something wrong like this, the whole religion can seem wrong to the followers," said Mohammad Hussein, 45, a Shia government worker in Amara.

IWPR sources say the footage, which became public when Mosawi lost his phone's memory card, allegedly shows the cleric naked and involved in sexual acts with his wife and, in a separate video, another woman with whom he had a muta'a, or temporary marriage. Locals who have seen the complete contents of the card claim there are images of as many as 18 other women.

IWPR sources say the videos were quickly spread by locals through cell phones and some were later uploaded on the internet.

By June 29, one of the many non-pornographic versions of the alleged videos posted on the YouTube website had nearly 80,000 views. Some of the videos had been doctored anonymously into anti-Shia propaganda.

According to sources familiar with the Shia faith, that Mosawi was allegedly engaged in sex with the two women is not the problem. The fact he allegedly filmed the said encounters, however, is considered beyond the pale, especially for a leading cleric.

When the scandal became known to his colleagues, Mosawi was quickly denounced and stripped of his position as Sistani's representative in Amara and surrounding Maysan province, IWPR sources say.

"Ayatollah Sistani found out about this incident from ordinary people who came to our office and told us that [Mosawi's] videos had defamed the Marjaya's reputation and the reputation of all Shia," said a cleric in Sistani's office in Najaf, who declined to be named as he was not allowed to speak about the incident.

"After we checked with our people in Maysan province, Ayatollah Sistani issued a statement to us clarifying that Mosawi was no longer representing the Marjaya,"

According IWPR sources, Mosawi's location is still unknown. Authorities in Maysan province have issued arrest warrants for anyone caught watching or distributing the alleged videos, but no charges have been filed against Mosawi.

"[Mosawi's] action is completely unethical and the situation in Maysan is unstable. We have worked hard to maintain security here and it hurts to see such footage being watched by young men and women," Saad Hussein al-Mosawi, spokesman of the Maysan provincial council, said.

In Amara, Mosawi's neighbours and followers have watched the events unfold with disbelief.

"We were really shocked when we saw the cleric in those videos. We considered him a sacred person. He is a devout example to us and we used to pay him zakat (religious donations). As his neighbour, we never had any doubts about him. I am shocked just like everybody and now I am worried about the women in my family," Jawad Kadhim, 40, a schoolteacher and neighbour, said.

The families of the women in the videos have so far reserved their anger for Mosawi rather than their relatives, but there are concerns of revenge from tradition-bound tribesmen.

A tribal leader, Shiekh Abdul Hussein Jabber al-Maliki, related to the second woman in the videos said she would not be punished because "it was not her fault, it was his".

"We are calling on the Marjaya to check its deputies and representatives more closely to avoid such actions in the future. Events like this can cause endless fights and battles we have no time for," he said.

As the story makes its way through Iraq 's bazaars and teahouses, others have questioned the Marjaya's process of vetting its members and the integrity of institution itself.

"When Sistani was issuing fatwas about Iraqi issues, his followers used to say that he is most aware person in Iraq - aware of everything. So, where has his awareness gone?" said Abu Zamel, 55, a Sunni and government employee in Baghdad .

Ammar Naser, 28, a Shia engineer in Baghdad , said, "Really, I am astonished. For two days people have been telling me about this story, and I really have to consider whether or not to keep following the orders of the Marjaya and Sistani."

But members of Sistani's inner circle have downplayed any damage to the ayatollah's prestige.

"Ayatollah Sistani is a respected leader not only in Iraq , but all over the world. His reputation will never be affected by an ugly act such as this," a Marjaya member who declined to be named due to the sensitivity of the subject said.

However, Sheikh Haider Abdul Ghaffar al-Ansari, a senior cleric in Amara and a Sistani adviser, admits the scandal has shaken the Shia community.

"Mosawi is no longer a representative of the Marjiaya, Ayatollah Sistani has removed him from his position. We do not know where he is, and he does not represent the Marjaya at all," he said.

"Although the incident seems to push people away from their religion, I have noticed that number of Shia Muslims attending prayer services is increasing. Even so, I think this incident will push us back two years in terms of time."

Iraq
Crisis
Connect with us